Got to see the latest in the Marvel Universe epic Avengers; Infinity War on Friday. Treated to the movie for my birthday. I do love the fact that since the first in the series, the movies in the ten year saga have all been released on or around my birthday, which is nice).


There's probably not many out there that haven't seen the hype and stuff for Infinity War and being the latest and culmination in the line of the various story lines of Thor, Captain America, The Avengers and Guardians of the Galaxy plus the other spin-offs, the whole thing is pretty ballsy for the movie industry in it's encompassing plot and span. 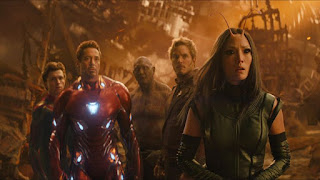 Basically Thanos, the Arch bad guy,  wants to help the Universe by killing off half of everybody in the Universe so there's enough to go round and to do that he needs the six Infinity Stones (gems) to give him the power to do this. Obviously the hero's are trying to stop this, not least as one of the stones is in the forehead of The Vision, one of the Avengers. With the movie picking up from where the last of side plot movies Thor;Ragnarok left off.

The movie has most of the previous main plots and sub plot character in the movie, and that means there are a lot of fairly developed characters vying for screen time in the two hour slot. There are a couple of conspicuous absences with the most prominent being Hawkeye who has been a mainstay throughout the Avengers movies, probably away doing other movies but with rumours of a separate Hawkeye based movie in the offing.

As a result of the limited screen time some characters do get more time than others and though the Cap and his cronies seem to get a larger slice, it is very much Iron Man et al that seem to carry the larger part of the plot development. I suspect that Infinity War Part 2 (or whatever it gets called once made) this may be reversed as there's a couple of easter eggs hinting at this especially near the ending. 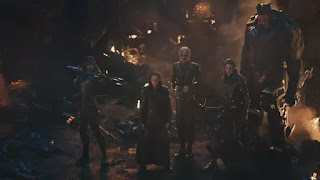 The limited time and the probable cutting room floor option has meant there are a few strange omissions from the storyline or just included action, I noted the Vision was through out the movie pretty wimpy in the fight scenes he's in (not much except the street fight in Edinburgh) but given he's got an infinity stone in his bonce he really doesn't actually do very much, especially in the big finale fight. A bit lame, but then I'm biased as the Vision was always my favourite character since the street fights against the Nazi's in Paris on the pages of a very early Avengers comic (yes, I do go back to the late sixties with my love of the Avengers). 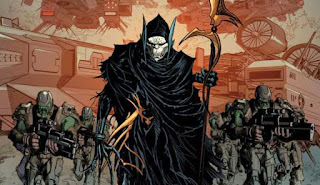 The film has the expected has the expected big movie moments and probably because there are so many characters vying for your attention, I actually thought that some of the CGI settings eg Titan the old home of Thanos, were particularly eye catching and maybe upstaged some of the scenes though I'm not sure that's a bad thing given the grand sweeping scope of the movie, needs to be pretty epic. 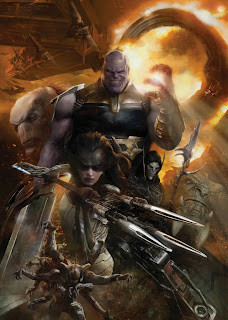 The bad guys, Thanos and his fairly small (three I think) group of villains are pretty good though there is no explanation as to where the three stooges have come from ie no back story but these characters actually stand out pretty well in the crowd and are worthy of a bit of movie development (except the ones that cop it of course).


The film has the usual hordes of faceless minions but I noted the good minions of which there are a cast of not a few, do get to have a face (mainly in the guise of the cohorts of the Black Panther and his Royal Guard etc from the African realm of Wakanda where a fair bit if the action takes place) which is nice. 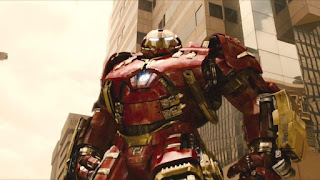 There is a very nice touch of character development and the directors, Anthony and Joe Russo, have played with the relationships of several of the characters between one another and is part of the main enjoyment of the film, there  are several huge ego's among the hero's and the interplay here is quite enjoyable. The Thor/Rocket team up here is particularly catching. There is even a bit of character development for the Hulk and he's maybe learning he needs to fight, not just smash but that maybe a bit in the future, watch that space for that one.

It is probably no secret that Avengers; Infinity War has a pretty hefty body count by the end of the movie and not to include any spoilers but though it's not exactly a superhero version of Hamlet, there is approximately half the hero's bite the dust, some a surprise and others very not. I do suspect that all might not be as dead as all that since several of the franchises already have sequels in the offing with Guardians of the Galaxy having part 3 due next year.

A slight side note of the fact that the studio's seem to be controlling the spread and content of images out there in internet land shows a good marketing and control which goes to prove they can do that. One thing I did note during the movie and a trawl through internet images for the blog confirmed that there are no 'milion dollar shots' in Infinity War, you know the lined up posed 'Avengers Assemble!' comic book style line ups that usually get picked and multi-shared. I don't know if this is deliberate or just curious.

Given the film ending, ie a bit of a cliff hanger or is it anti-climax (deliberate) one thing is for sure the franchise will go on and there will be many more Marvel Universe movies to come and loads more to discuss the maybe's and maybe's no in the coming movies. Hurrah!

Generally, given the usual gripes of an Avengers fan and that your never going to be 100% happy cause your fave character doesn't get a good showing in the movie, I thouroughly enjoyed the film and Avengers; Infinity War gets a resounding 9 out of 10 'Must See' from the Warblog.

Go and see the movie even if your not a Marvel Fan, the humorous bits are worth it.