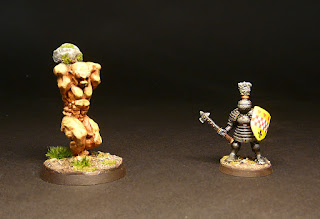 A couple of old type figures which have seen sterling service but needed brought up to scratch for current use with a re-paint and re-basing.

The figure on the left is an 80's Ral Partha Stone Giant and on the right original Citadel Fighters range F1 with a replaced shield. The giant I've had since the early 80's I think and the fighter the early 90's.

Both figures have received a pretty standard treatment and nothing fancy so their back on the table in a jiffy.
Posted by Hendrid at 01:01