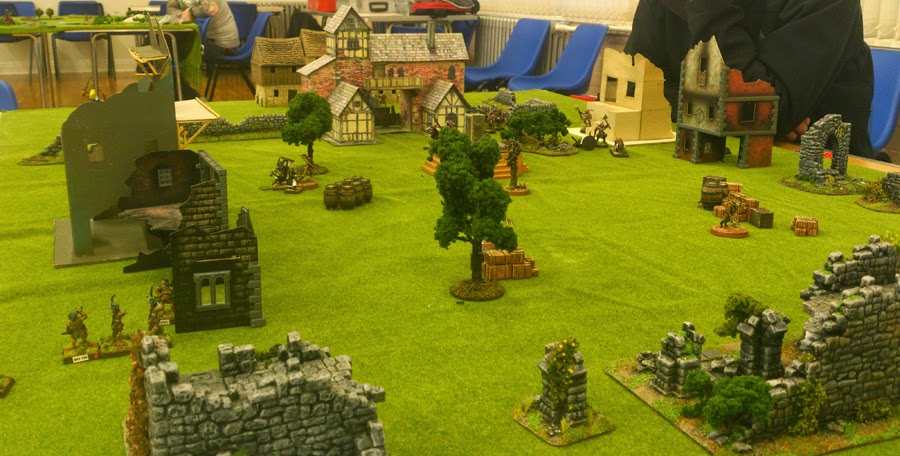 Round 9 of our current Mordheim Campaign was played out recently with a bit of a crisis at the club re access to terrain boards and terrain nearly scuppering the evening, but all was brought together successfully by a joint effort of the crew and we managed to pool resources and the game was a goer. 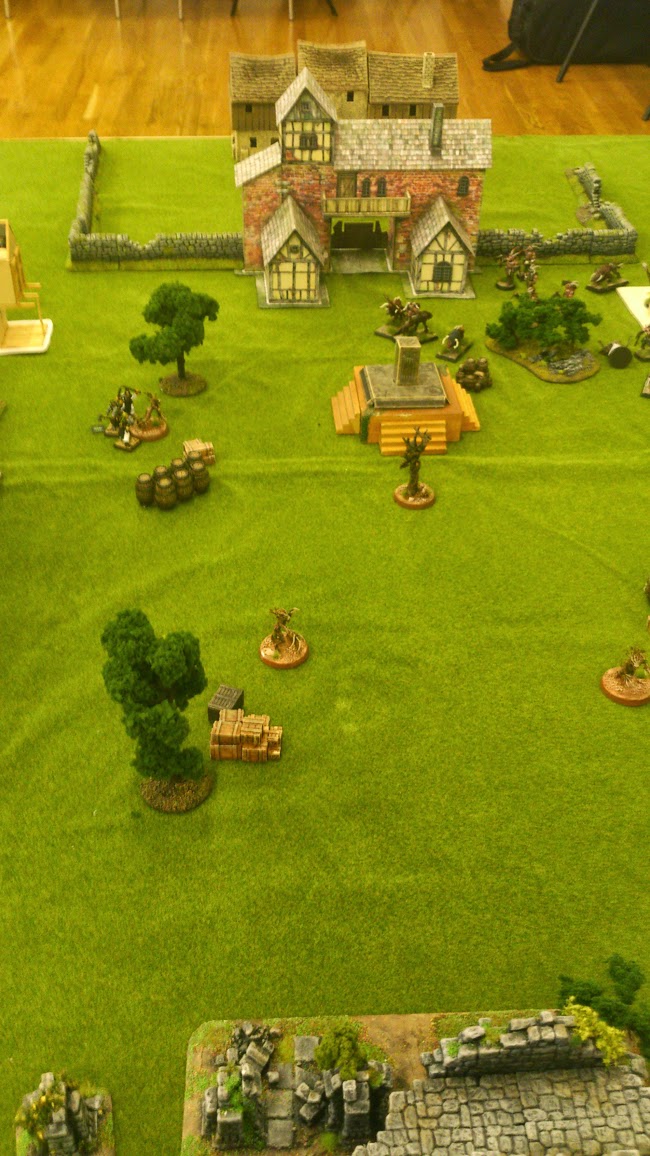 The Bands having now located the lair of Allek the Necromancer find themselves in the Taalford Lowlands area and at the Temple of Invidious Silence, where in the Necromancer has holed up.

The outer works of the temple are patrolled by the Great Oak and it's five Saplings, creatures possessed by great evil spirits who guard the approach to the Inner Courtyard.

The Inner Courtyard is encircled by an ensorcelled wall and gate house, the gatehouse having large magically locked gates which can only be opened by the ancient key (previously located back in episode 4) which is currently in the possession of the Beastmen having changed hands previously at least twice. The Inner courtyard was also guarded by one of Alleks' minions and his human bodyguard and four skeletal soldiers barring the way to the catacomb entrance.

With the Beastmen having won the previous game and gained the advantage were able to select their deployment position and promptly deployed wisely as near the Inner ourtyard as possible. The other bands deploying randomly with the Sisters opposite the Beasties and then the Reiklanders and Marrienburgers in the far corners of the outer courtyard. 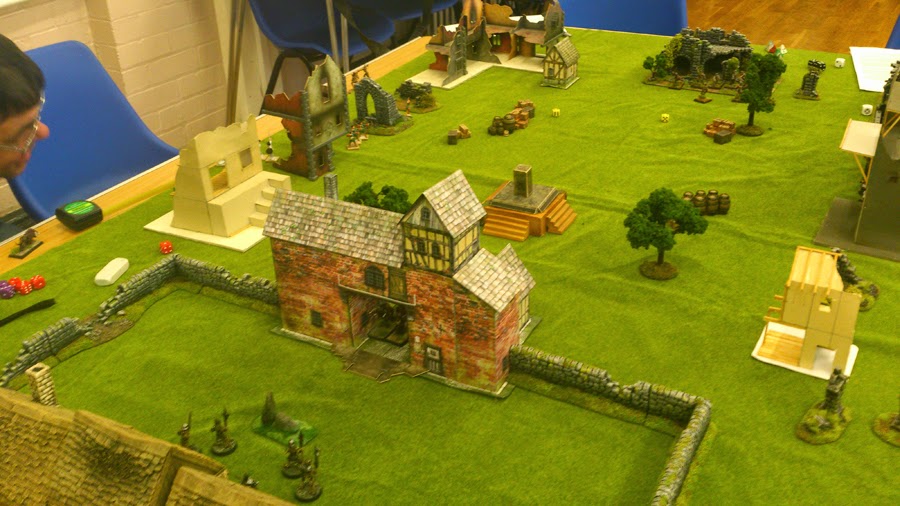 
The Saplings duly charged towards the nearest enemy they could see and they pretty quickly went down to bands might with only the Marienburgers failing to take one out due to a general lack of shooting opportunities.

The Great Oak however was of different mettle and headed for the Reiklanders who scattered out of it's way and only the Dwarf Hireling standing to fight. Adding insult to injury the Sisters decided to pick on the Reiklanders as well.

The Dwarf went down but not out and the Oak then headed for the Sisters who wer lining up to shoot, and the rest of the Reiklanders made a bee line across the outer yard for the Marienburgers. 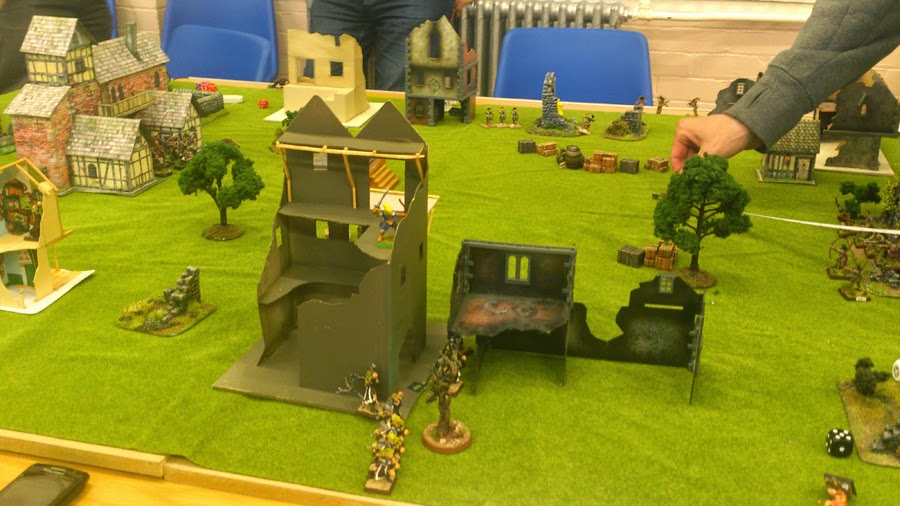 The Beastmen having taken out intervening saplings headed for the gate and promptly opened the gate with the old key and the leading centigor decided to have a little drinky in the gateway blocking the advance for a round while the Necromancer tried to cast nastiness on them but luckily to no avail.


The Reiklanders charge across no-mans land was short lived and the Marienburgers inflicted a couple of losses on the Empires finest and coupled with earlier losses to the tree and Sisters, they decided enough was enough and left for their evening meal somewhere safer.

The Sisters then had to face the terrifying Great Oak which charged into their line and surprisingly the girls managed to take four of it's six wounds in quick succession (the Reillanders having managed to take off one earlier) leaving the beast with only one. Despite valiant efforts the Sisters could just not complete the mighty feat and lay low the evil spirit which in turn took a hefty toll on the Sisters before they broke in rout from it's flailing branches.


The Beastmen now recovered from their delay and charged into the Necromancers minions and in one round took out all the baddies bar one, which they then dispatched in short order bringing the baodyguard down in a tumult of teeth and claws leaving the way open to the catacombs which they then descended, claiming the victory for the Beasties.


With the victory no longer obtainable, the Marienburgers thought they would go for some experience and with an intact warband thought the Great Oak with only one wound would be easy pickings.

Alas, this was proved not to be the case and without dwelling on the outcome we shall draw a veil over the screams and gurgles, and suffice to say the Great Oak still patrols the Outer Courtyard to this day.

A very bloody and surprising episode but lot's of fun but only the Beastmen survived relatively unscathed (thanks largely to their advance deployment) so perhaps depleted numbers all round for the final episode and the hunt for the Necromancer comes to it's conclusion next time.

Will the Necromancer triumph in the end or will the Warbands come together and defeat his nefarious schemes.
Posted by Hendrid at 22:22 4 comments:

Went to see Edge of Tomorrow with Tom Cruise and Emily Blunt earlier in the week.

Without giving too much away, the movie is set in the near future with a recent alien invasion via an asteroid hit in central Europe, and a viral spread of the 'Mimics' who appear to be unbeatable until a battle at Verdun where the new Exoskelatal battle suit was deployed.

The movie starts with the introduction of Tom Cruise and and sets the scene for the intro battle where the Allied world troops are set to invade Europe from south of England and Mr Cruise is thrown into the deep end and the main plot thread is introduced where he gets to live a pretty violent 'Groundhog Day'.

There are several things in the movie which are not explained or don't hang together logically, but as it says in the movie itself; Why are the Aliens here, what do they want? Doesn't matter, we need to kill them anyway. Which I think is fair enough, it's a movie and it works in it's own universal setting. 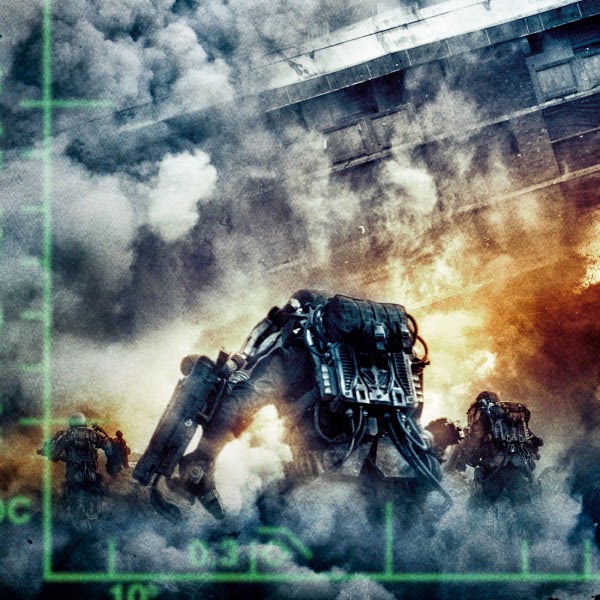 The movie is pretty much action all the way through and although there is a minor sub-plot, but this really doesn't get in the way of the big guns and gribbly aliens at all.

Very apt for the anniversary of the D-Day landings the attack on France is very much a re-take of the Landings and looks the part and is pretty well done. There are several very obvious nods to past real history plus some pastiche scenes to previous movie genre greats.

The hardware is all very eye catching and believable, and I believe that Mr Plumridge of Old Crow Models was involved in the making of the movie, hence his suspension of the website et al for the last year or so as he has been working on the movie.

There are a small number of well ken't faces like Bill Paxton make appearances in cameo roles but the movie is driven by Tom Cruises' character all the way.

Thoroughly enjoyed the movie, as did my daughter who was quite surprised how engaged she got with the whole thing (given that she thought we were going to see X-Men, Days of Future Past), so a thumbs up all round.

Another 8 out of 10 movie score from the Warblog. Worth seeing if only for the Landings scenes and the hardware.