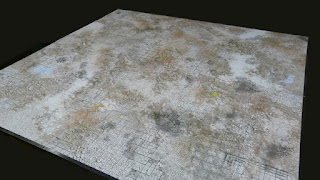 Following on from the previous installment on the Terrain Boards experiment, I have now completed the reverse side of the boards, which strangely was the instigation of the project but I ended up doing this last.

As reported last time I was using the Heroic Maps 'Frost Ruins' tile set which was available fairly cheaply through the usual download sites and I had printed out the 50 or so pdf sheets on to card and then cut the individual sheets out roughly and then proceeded to trim each sheet to match its neighbours. Starting in the bottom right corner and sheet no 50 (for no real reason as it didn't seem to matter which corner to start.

As I have mentioned before this tile set includes a reasonable (and luckily consistent) overlap on each sheet, so to make sure each sheet matched its neighbour before gluing I had to check the alignment of each sheet prior to cutting. Most of the time this was pretty easy as most of the sheets have a paved 'grid' as part of the design so this was easy to follow for cutting but the occasional sheet had to be aligned with its partners and cut lines marked to suit.


Once trimmed to size, each sheet was glued to the mdf base board using spray adhesive.


The exercise was pretty laborious but otherwise pretty easily accomplished, and once all the sheets were glued the two 4' x 2' boards were separated by the skillful use of a very sharp knife. The boards then had a run of black tape run around the edge to protect the exposed card edge from future damage. 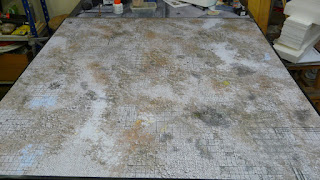 As the tile set produces a 53" x 53" finished area, there was a cards width at one end spare and a half length cards worth trimmed from the top giving a reasonable amount of 'spare' feature. This spare material will be used to decorate some polystyrene blocks to produce some raised base area's for a bit of vertical interest to the terrain layouts available, always nice for a skirmish layout. I'll post on how these turn out once completed soon. 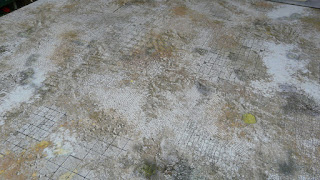 Again, as with side 1, the experiment can be deemed a success in that the whole exercise has produced two usable base terrain layouts but with a fair expenditure in time and hasn't produced an exceptional saving in cash, so for the difference, next time I would probably go with the bought gaming mat option.

My next venture into gaming boards is going to be in the realm of modular terrain boards , a terrain project I have been itching to do for quite some time. More on that hopefully soon.

Email ThisBlogThis!Share to TwitterShare to FacebookShare to Pinterest
Labels: Terrain