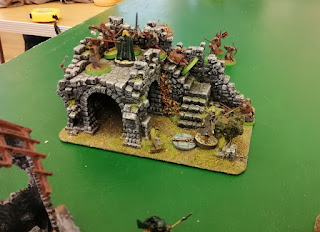 So the big finale for the year and a bit long Battle Companies finally rolled around last week with the Campaign victorious Evil side laying siege to the Arnorian Amon Sul and the Good forces trying to delay the inevitable death and destruction bent hordes from slaying all in their path.

The Scenario was simple, the Forces of Evil; Kev (Warg Riders), Andy W (Mordor Orcs), and Kenny (Easterlings), Any K couldn't make it on the day to add to the Evil hordes numbers), were to assault the outskirts of Amon Sul, defended by the forces of Good; myself (Arnor), Dave K (Rivendell Elves) and Leigh (Hobbit Horde) who were re-enforced with 150pts worth of Arnor Warriors and Rangers across the front (18 figures). With the Arnor re-enforcement's included it was a 1200 to 850 point match off plus the evil possible 150 pts of re-enforcement's (would have been 1400 or so if Andy K could have made it) giving the Evil a roughly 2 to 1 advantage in points for the assault, about right.

Having won the Campaign (by a narrow victory of one game, the Evil side gets one re-enforcement roll to come on centre stage on the their deployment line on round 3. Rolling on the table which could be anything from a Ringwraith to a passle of Orcs, the Evil side rolled up a Cave Troll and half a dozen Warriors of Angmar to add to their horde count.

The Ruins held eight objectives roughly evenly spread across the 12' x 5' table, four in the front of the town and four half way back. Each objective worth 2pts, the death of a captain worth 2pts and each other hero 1pt. The game was to be of limited length but I wasn't sure what was fair here so a nominal 9 turns with the option to extend to 12 if the 9 proved too short for the evil side to traverse the the hefty run in. Most victory points gives the winner to see if the good forces delay the enemy enough to let the 'big wigs and mighties' time to escape to fight another day. 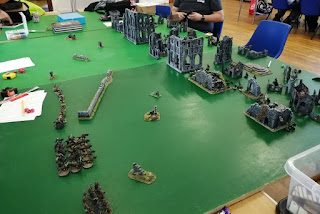 First off, the forces of Evil cunningly surprised us by deploying completely on the centre/right flank, thus pretty much nullifying Leigh's mighty Hobbits over on our right. (Leigh then spent most of the rest of the game guarding objectives and marching across the front to come into bow range of the attackers). 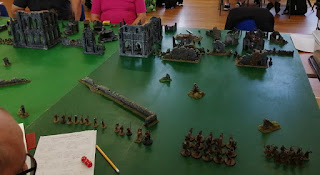 First round and the defenders gained the initiative but stayed put and the evils launched their attack on my poor Arnorian's on our left with the Warg Riders surging ahead to limited the rounds of much shootiness coming at them. My first round was fairly poor given the number of shots I poured into them but still managed to take out three Wargs and riders. The Orcs and Easterlings began their march towards our line with the Easterlings being slowed by a covering wall. 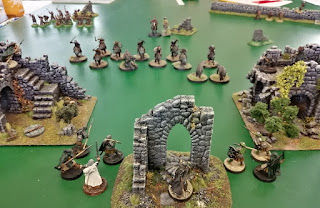 The second and third rounds were pretty bloody affairs with the Wargs charging into the defences. My Captain called a heroic move after loosing the initiative a drew back Warriors in his Charge just out of range of the first charge and then managed to get the charge in the following move after a slighlty worse round of shooting but blunting the Warg charge.The two Easterling Cataphracts joining the fight towards the end. 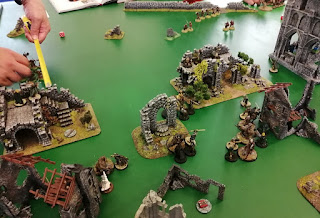 Elsewhere on the flank its more of a give and take melee but the number of warriors (and better dice rolling in melee than shooting) hold the remaining Riders and Cataphracts at bay. 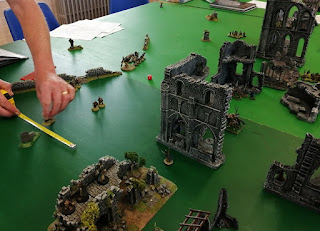 The slowly advancing Easterlings trade a fire fight with the Elves and a few rangers in the centre ruins and begin to get picked off one by one as the number of shots coming their way begin to tell.

The Troll and Angmar Warriors appear and start a slow trek towards the centre and approaching Troll killer Hobbits. 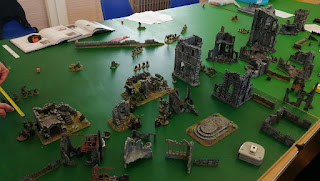 The Arnor Warriors and Rangers (including the local inhabitants jump into the fight with the Warg Riders and Cataphracts and though losses are heavy manage to break the Warg Riders.


Meanwhile the Orcs continue their steady advance on the far left while taking small but continuous losses from the Ranger Sergeant Tarondor and a couple of Rangers defending the left most ruin. 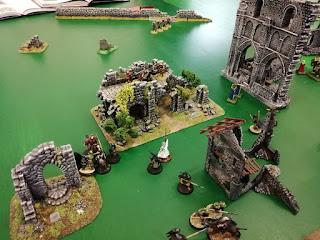 With the Orc horde closing, Captain Anairon rushes towards the beleaguered Tarondor who fires arrow after arrow at the oncoming warriors as they scale the walls taking down the Ranger defender.

The initial fight on the left draws to a close as the Wargs are broken and begin to disappear just as the Easterlings scale the other ruin on the left and put the Ranger defenders to the sword (aided by some firing from the encroaching Orc archers) and begin to close on the untouched Elves while continuing their long range shooting at the Elf Archers and Rangers on the high towers. 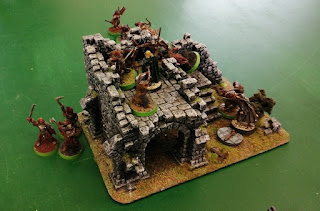 In a cinematic end, surrounded by multitudes Sergeant Tarondor goes down surrounded fighting to the end and rather than do the sensible thing and move back to the other Arnorians, Anairon jumps into the fray depending on his mighty blade and cuts down a couple of Orc Warriors but is surrounded too, below the arches of the ruin and despite mighty blows and fate rolls the sheer number of hits (each enemy getting his hits doubled and Andy saved his hero's for surrounding Anairon and got good rolls :-) ) Anairon went down in a flurry of mighty hits from the Orc weapons.

The Easterling's began to assault round the high towers and about to clase with the Elves and the Hobbits reached firing range and began a few pot shots at the Troll and Angmar Warriors.

This was the end of round nine. My Arnorian's were two away from their extended break point but had lost four of their hero's and there were another six or so Arnorian defenders down, The Elves and Hobbits were pretty much untouched, The Warg Riders were broken and a spent force and the Easterling's and the Orcs were both nearing their break points so the Evil side called it, thinking that with the hard Elves and the many Hobbits still to tackle it was an unlikely prospect to get the victory. So the defenders managed a victory delaying the evil hordes sufficiently blunting their initial attack to let the Seer of Amon Sul escape the destruction.

Looking back on the scenario, the Evil side felt that the long run in was just too much to over come despite their two to one superiority in points, and looking back I would probably shorten the run in distance to three normal moves, maybe four at most. With no mechanism for figures to 'rush' within the LotR SBG rules, long moves turn into a trudge which can be fatal while under fire even though shooting tends to get a kill in about 1 in four if your lucky.

But with the Warg riders moving in quickly but unsupported, nullified their advantage of the flank move, pitting one Company against a slightly bolstered other, who managed to get the numbers into the combats that counted counteracting the disadvantage in the points values, though they were sufficiently battered to probably break shortly after now that the Orcs and Easterling's were in amongst them. With a Troll and fresh warriors coming in things were still not completely decided for the Evil forces, but perhaps unlikely to get a result in three moves right enough probably being only able to pick up another three objectives at most in that time.

So a slightly fizzled-out ending to the campaign as I would have liked to get a good tit-for-tat bash-up taking it close to the edge finale but I find it quite hard to get a good balance with LotR SBG scenario's, as I don't play then often enough to get a good feel for the balance, but a good game all in and a completed campaign which is always a result.
Posted by Hendrid at 22:59 4 comments: