Being the seventh exciting installment in our ongoing Mordheim Campaign and the crowd were as usual waiting with baited breath for the outcome. 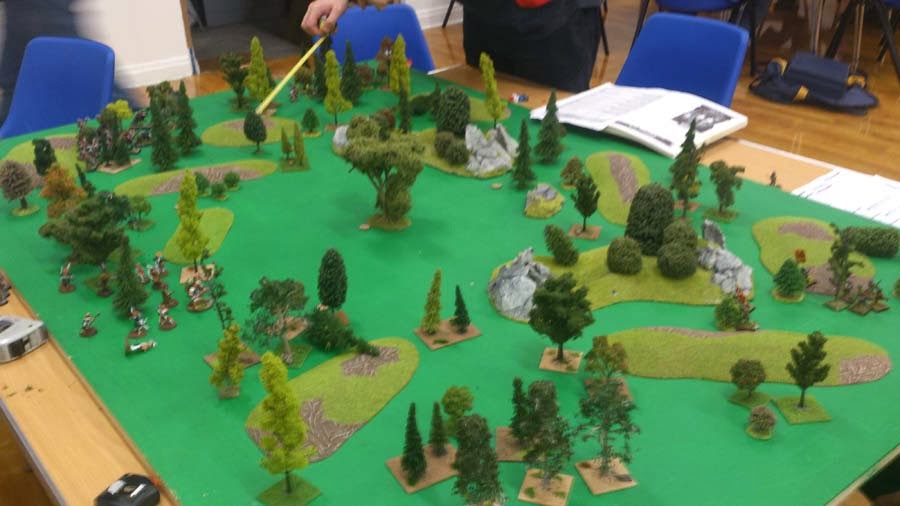 The usual suspects were all out for the event with Kev's Beastmen, Dave's Marienburger's, Andy's Sisters, Ian's Reiklander's and my Kislevite's all out for a stroll in the sunny Talabec Border Country in search of 'The Hanging Tree'. A huge gnarled oak where-in is imprisoned the spirit of an old and evil necromancer, with it's branches festooned with the remains of past victims of it's malevolent spirit. The reason the bands are searching for this evilness is that there is a Mace of Undead slaying rumoured to be among the roots at the trees' base dropped from a past hero.

The clearing round the Hanging Tree will randomly raise 1-3 zombies at one of six points around the clearing at the end of every complete turn on a roll of 5+ on a D6 once anyone enters the vicinity of the tree.

Once again the bands were deployed at random with the Sister's close to the Beastmen, the Kislevite's next on the right of the Beastie Boys and then the Reiklanders a little away followed by the Marienburgers in the opposite corner from the Beastmen.

This led to an immediate pairing up of the Reiklanders vs the Marienburger's and as Kev's Beastmen were pretty much stuck between the Sister's and Kislevite's decided to make a dash for one (deciding to go for the Sister's first) so as not to get caught between the two.

The Kislevite's then started to move towards the the Beastmen in the hope that the Sister's would soften them up a bit before the crunch.


The Reikland and Marienburg Mercs moved towards each other and a bit of sniping ensued as they approached with little effect both jockeying for position as they did.


In a very short order, the Beastmen rushed the Sister's and in what seemed the blink of an eye the Beastmen felled a number of the Venerable One's and Andy promptly failed his rout test on his next turn. Hardly able to swing a hammer in anger much to his chagrin, and an early bath ensued. While the Kislevite's continued to advance on the Beastmen extending their line and staggering it to hopefully blunt the coming unabashed storm.

The battle on the other side of the clearing lasted a bit longer with the two Merc bands trading blow for blow in the woods but the Marienburger's coming out the worse for it and Dave deciding pretty early on to cut his losses and making the rout.

With the Beastmen clear of the Sister's, they turned and rushed towards the advancing Kislevite's. Losing one dog to the usual paltry support fire from the Kislevite's, the almost unscathed Beastie's hit the front of the Kislevite line (in the form of the Merc Ogre and the Esaul) which had advanced ahead of the rest to hopefully break up the band a bit.


The barney was a great ding dong affair with the two bands trading blows and in the end with loses equal Kev was first to have to check for the rout and fail where I managed to hold but just.

With my numbers depleted I decided on the better part of valour and made a voluntary rout leaving the field to Ian's Reiklanders.

It was of course at this point where the tree managed a token defense and threw up 3 zombies right at the end where the Reiklander's made pretty short work of having no other distraction's at this point.


And with the zombie's dispatched Ian got another victory under his belt and a tasty weapon to boot.

The post game round up threw up a couple of interesting results with the Beastman leader getting to fight in the pits (again) and loses all his equipment, the Kislevite Captain was slain with this being a pretty disastrous result for my band at this point in the campaign and losing the spell book too adds to that misery. The other bands didn't get too much of a mauling but Dave's luck with the after game rolls has been pretty dire up till now.

Another enjoyable outing for the bands and the campaign now enters it's final phase as they close on Allek and his minions.
Posted by Hendrid at 00:05 No comments: