Went to see the latest Avenger flick when it came out on thursday. I'd been looking forward to more of the previous Avengers and related film action/humour mix and I wasn't disappointed.


All the previous characters make an appearance Iron Man, Thor, Captain America, Hawkeye, the Hulk, Black Widow etc, and with what is a pretty complicated plot line (for Hollywood blockbusters) a few new character are introduced to add the Marvel Universe crew detailed in the movie. Along with a passel of the supporting characters from previous Avenger support movies adding to the mix.

With the main protagonist being Ultron, it is no surprise that The Vision (my favourite Avenger from my childhood) makes an appearance to join the ranks and help fight the bad guys. Played by Paul Bettany, I was quite happy with the portrayal but thought the back story for the film of how The Vision is created a bit poor. 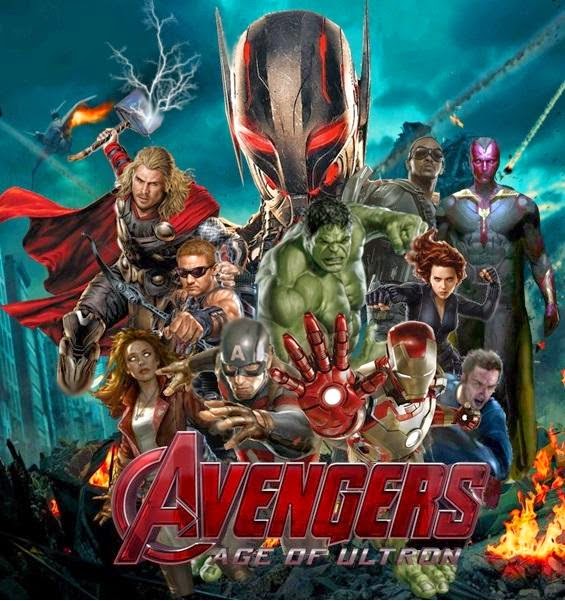 The whole film is slightly darker than the previous Avenger movies, with a part of the humour being a bit more on the black side, but there is still the slapstick and the buddy humour which helps you associate with the heroes. 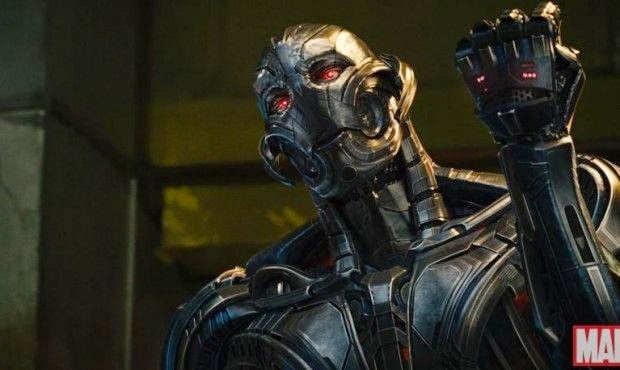 James Spader is a genius choice for Ultron and his droll and dry delivery is a perfect foil for the gungho and right-on hereos.

The look of Ultron, which goes through several changes through the movie, is pretty good and a fair update of the slightly naff look from the comics, though perhaps a bit too anthropomorphised, but all good really.

The fight/action scenes are great throughout, from minute one right up to the end and the big climactic fight scene at the end actually had me smiling away to myself, really good cinema. The production team and Joss Whedon have got the formula for this type of movie down pat now and it's difficult to say where they have got anything wrong in terms of putting an enjoyable romp together. 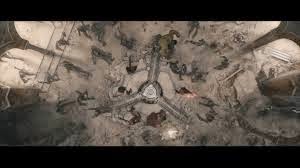 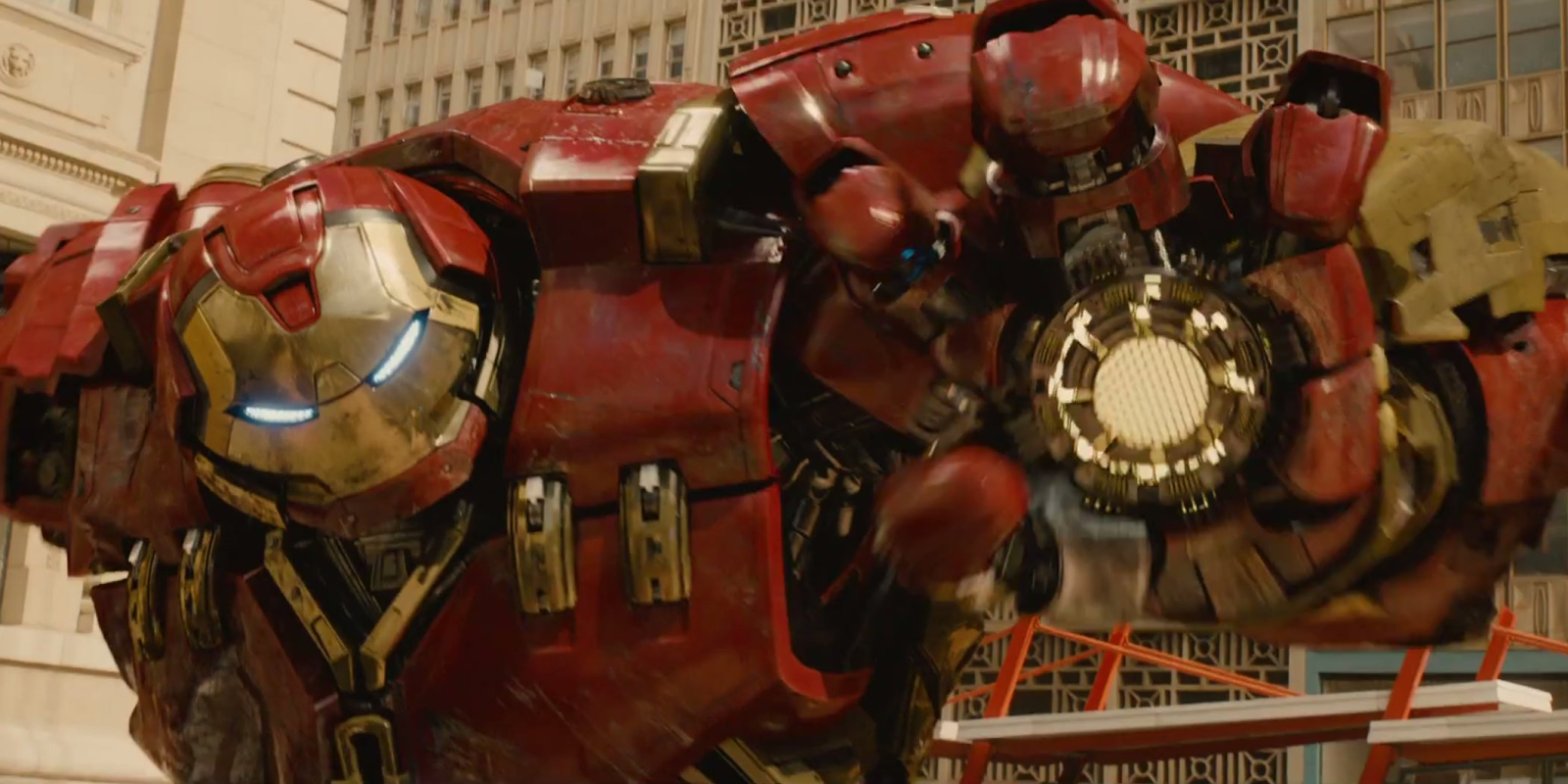 The ingredients are all there for the geeks (including me) for spotting the references and other characters etc and stir in a dose of hard tech machines and weapons, a sprinkling of women in skin tight suits with guns and some pretty good dialogue, you've got a winner. The whole plot thing has of course been altered to suit the Hollywood/movie version of events and to fit into the two hour or so timescale of the movie but this is not something that bothers me. 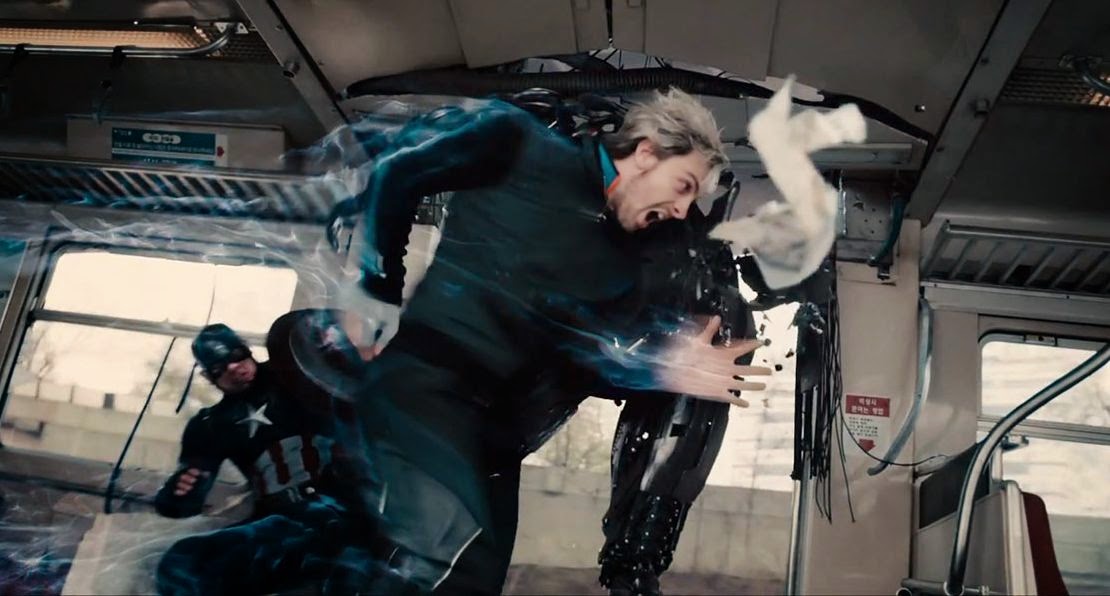 No spoilers for those who haven't seen the movie but some of the additional characters added into the Marvel-verse are the Maximoff siblings Pietro and Wanda (Quicksilver and the Scarlet Witch) withe Wanda being another favourite from my childhood getting added to the Avengers, though the costume has been suitably watered down to make it more 'acceptable', though she does spend most of the film not an Avenger so the standard get up is OK. (There is a glimpse later on of her 'hero' get-up).

The plot has time to get a bit of character development in too with Hawkeye and the Black Widow in particular getting a bit of depth built up and there is even a bit of a love story in there too which is an integral part of the Avengers comics from way back and again is fair enough, adding to movie mix.

The wind down ending is once again, getting a bit traditional in it's make up setting up the next movie in the series (The Avengers will return) with what looks to be a slightly different line up from the last couple. Tis is probably due to a couple of the actors getting a bit bored with the parts or just a bit older, but this is also in keeping with the comics which often have a different cast from series to series. There are after all a LOT of Avengers to choose from.

Still waiting for the 'Avengers Assemble!' though.

All in all a great movie and one which I thoroughly enjoyed. A recommended must see and gets the 9 out of 10 from the Warblog to go with it.

They Know Me Too Well 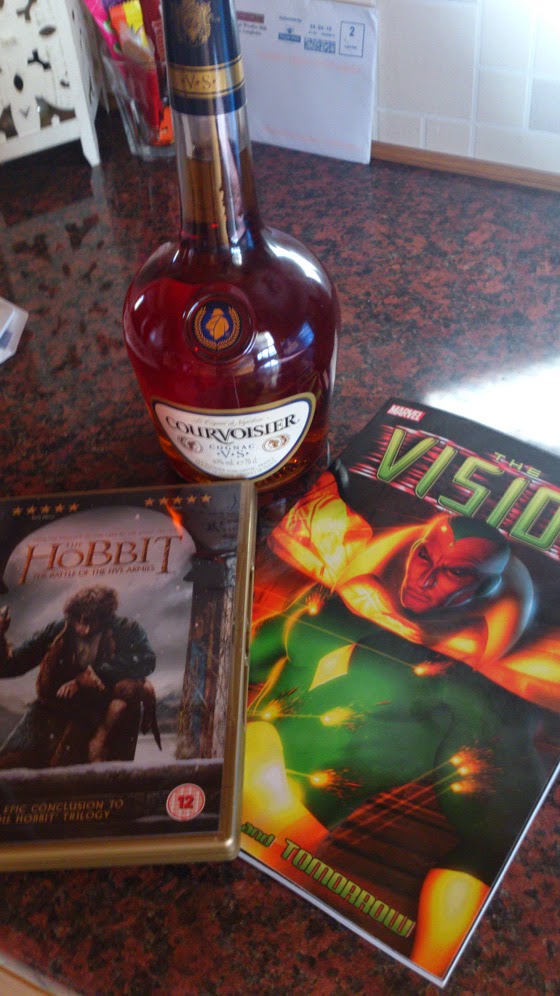 Gifts from my kids today for my birthday.

Do you think they know me too well?
Posted by Hendrid at 19:17 No comments:

Necromunda Campaign Round 5 - Catch the Curator 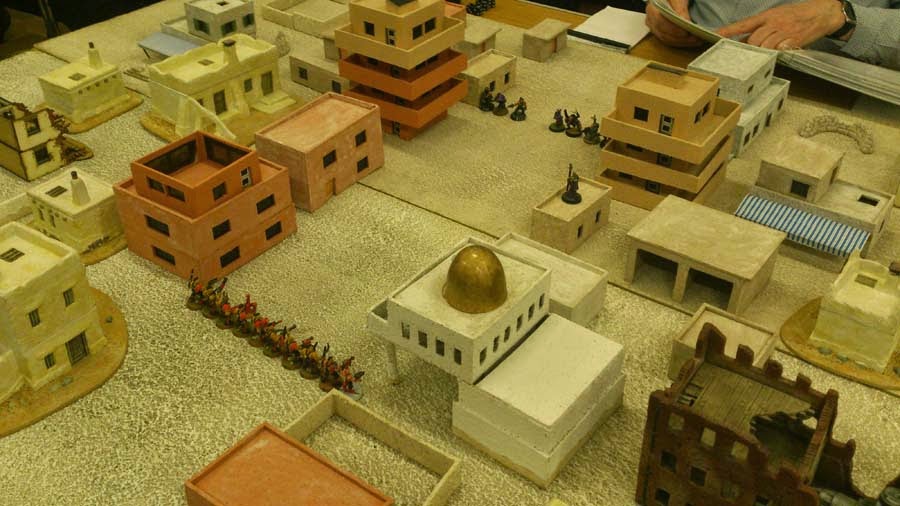 Another round of the Club Necromunda Campaign and this time Dave (the Winner of the last round) had picked an interesting scenario for this rounds game, 'Catch the Curator'.

The scenario deals with a Curator who has been sent to look for an ancient piece of Archeotech in the Underhive and the gangs are looking to sieze this treasure for themselves to get the reward. This multi-player scenario starts with the two highest throwing gangs doing a 'Shoot Out' in the central street, with the remaining gangs coming in at random from the other areas once the shoot out has developed. Each gang has a maximum number of 10 involved and as all are 'low profile', no special or heavy weapons. Random events now kicking in threw up (no pun intended) 'Pollution', so no Tunnels and Vents deployment. 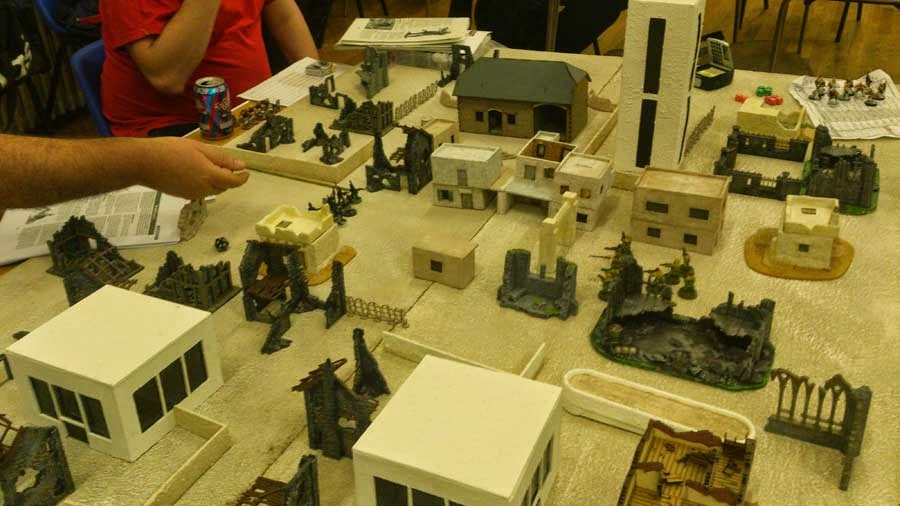 With a good turn out and seven players in the mix we had two tables with players randomly appointed; the first with Dave's Goliath's and Doug's cultists in the shoot-out and my Redemption crew coming on as the 'mixers'. The second table had John's Eldar facing off with Ken's crew, and Andy's Van Saar and Dave M's Ratskins as the late comers. 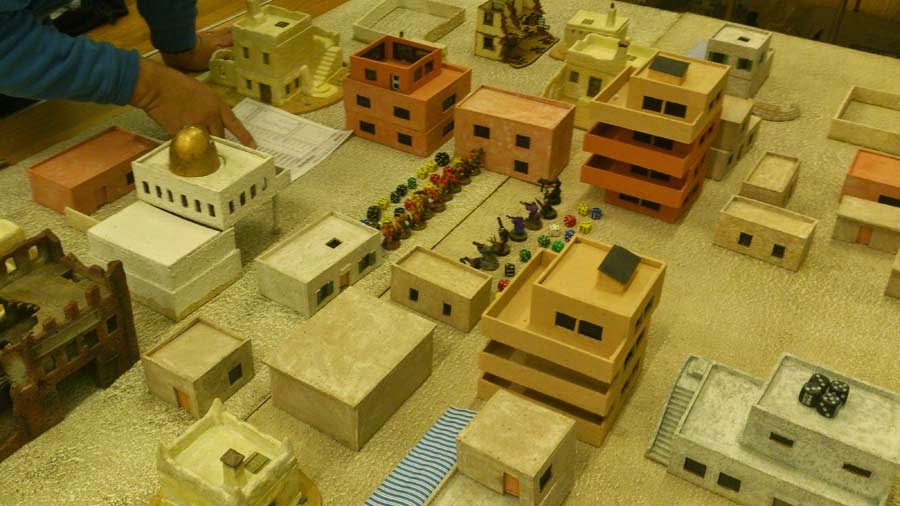 The Goliath's and Cultist's moved up quickly to each other and then let rip at close quarters and in that one round half or more of Doug's Cultists dropped with hardly a scratch to the Goliath's. Doug beat a hasty retreat from the bad fire fight leaving the Goliath's to swoop in and grab control of the Curator. 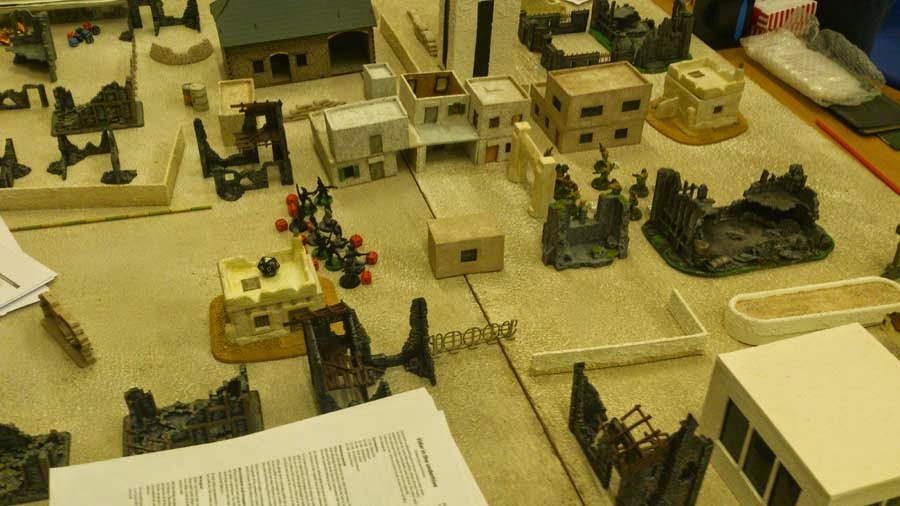 On the Other table, a similar story unfolded with the Eldar quickly gaining the upper hand against Ken's dude's but Ken refusing to go quietly into the night, swept up the Curator and tried to back off the table with the objective. 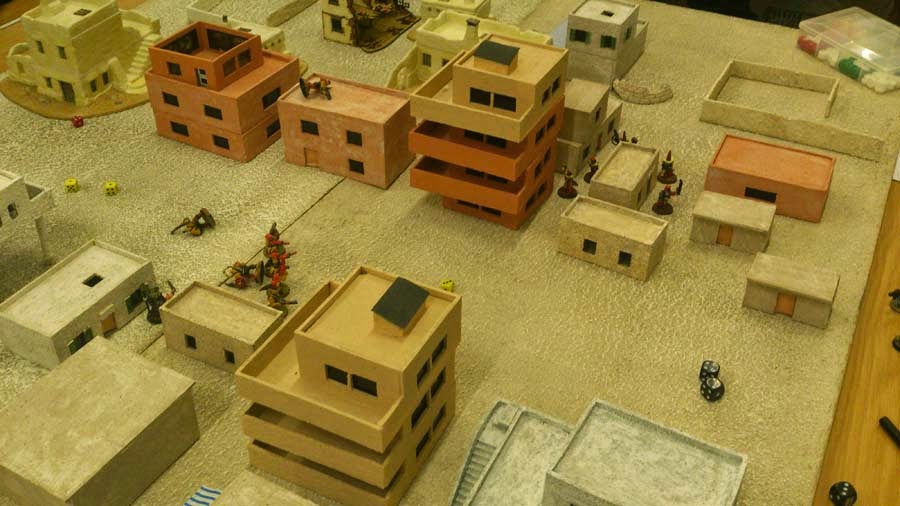 The Goliath's formed up a protective line in the street and awaited the rush of the Redemptionists, who having almost no shooting weapons in the gang due to the no Special/Heavy weapons scenario rule, were going to be forced to get to grips, hand to hand very quickly. 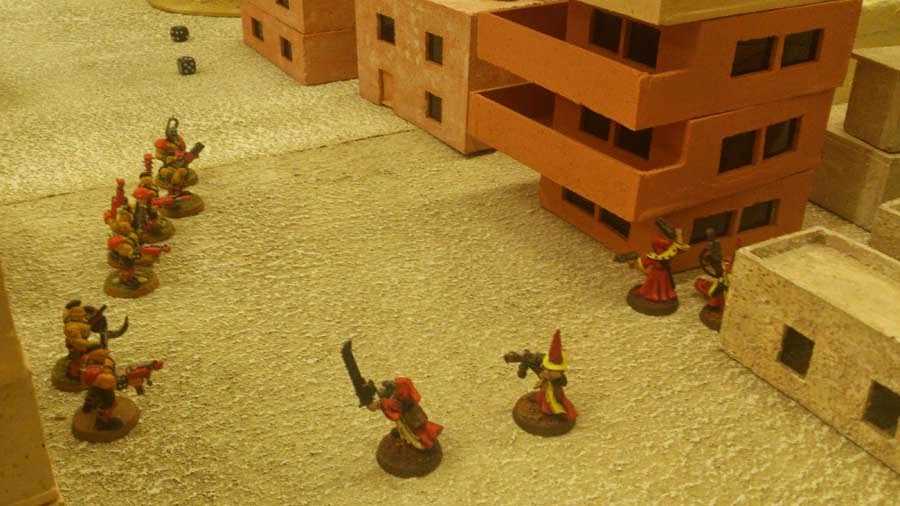 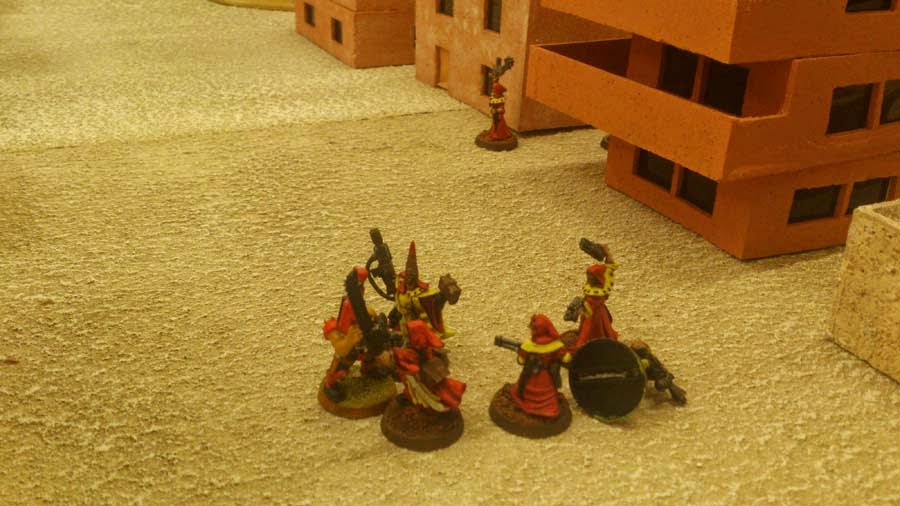 Table two was a much more confused, but no less bloody story. With the shoot-out over a Ken trying to back off with the Curator in tow, he was thwarted by the subsequent deployment of Dave M's gang right behind him. So caught between the Ratskin's and the Eldar, his gang very quickly succumbed to the rock and the hard place and his gang looked very 'gone'.

The Eldar swooped in to scoop up the Curator left standing by the departing Ken's Dudes and proceeded to escort him off down an alley away from Dave M and Andy's gangs and off table to seal the victory for the Eldar. Andy's Van Saar never getting to take an active part in the goings on as he deployed to far from the action to get in before it was all over.

With the Redemptionist's winning on table one and for no losses, I managed to pick my first victory of the campaign and have the honour of picking the scenario for round 6.

So far a pattern is appearing with fights between two gang's more often than not very one sided (often not a lot to do with gang rating) and player's going out of the game very quickly (ie in a round or two). The only thing giving gang's any resilience being numbers. This scenario limiting gang's to ten each made this even sharper as a result.