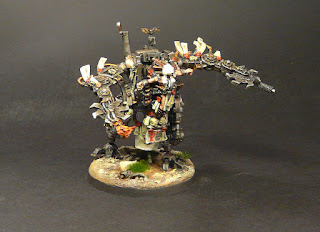 A random piece just completed. I was trying to get my painting mojo up and running again and decided to make a fresh start and looked for a piece that was different from where I got mired in the 'Slough of Despondency' last year with what was on my painting table.

I plumped for a Penitent Engine from my Sisters of Battle mini mountain as totally different from previous painting forays and I'm pleased to say I got quite into painting up the piece.

I was going to get into more detail, for instance adding scribbles to the seals, but decided against it just now and move onto something fresh again so the Engine is finished 'for now'.

Pleased with the result overall and I'm now looking to tackle some more of the Sisters of Battle bits and bobs I've got on the side lines ready to paint. 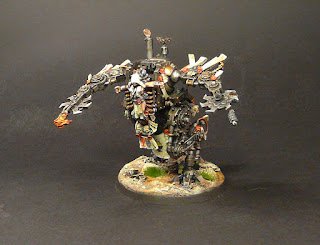 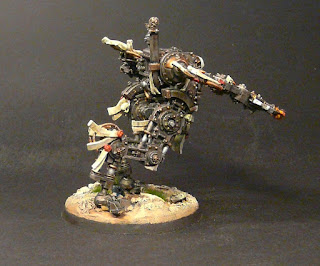 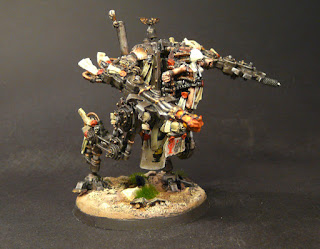 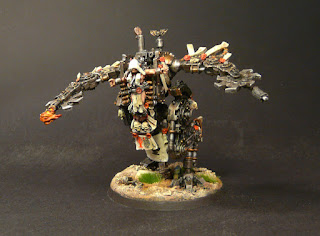 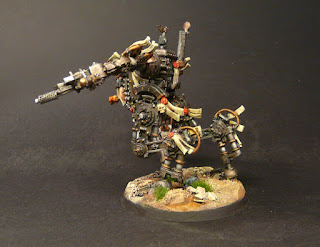 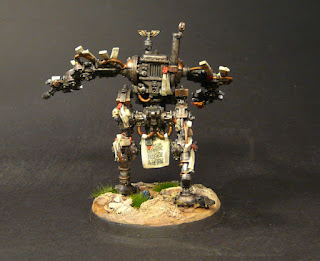 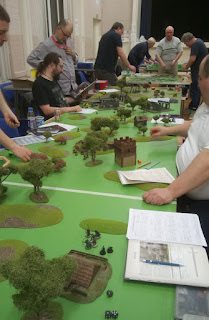 This week we kicked off the club Battle Companies campaign.

With ten players involved and a reasonable spread of different Battle Companies the campaign promises to be eventful and lots of fun.

The narrative campaign is set roughly around 1408 TA at the beginning of the Second Northern War and the Companies are battling around the border of Arthedain, Angmar and Rhudaur with the Companies looking to gain advantage for their side in the coming conflict and furthering their own agenda's and gaining glory and prestige in the process. 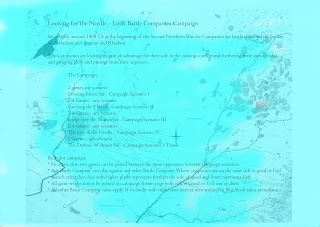 With the Campaign kicking off this week, we managed to gather 8 of the intrepid bands who let slip the dogs of War and had battle and managing to get the first two introductory games in and the first Campaign Scenario 'Crossing Emyn Sul' too (apart from Alan and Kenny who didn't manage the campaign scenario.

The games are pretty quick to play through due to the small starting number in each company initially but as the campaign progresses look to take a bit longer each time. With all the players gamed up together we swapped round the tables as each game unfolded and everybody had a different opponent for each of their games making things much more interesting.

My first game was a Hold the Ground Scenario against Andy K's Easterlings and my Arnor band had a pretty easy show of it largely due to my better shooting abilities and Andy's rubbish dice and gained a Hobbit Archer as reinforcement. 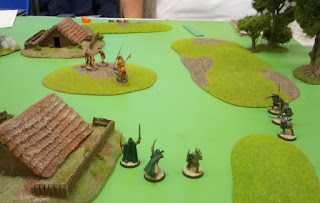 My next up was my Arnor forces against a slightly depleted Warg Riders Company of Kev in a 'Chance Encounter' Scenario and again my growing shooting abilities proving a match for the Warg Rider fast movement though I did lose one of my Warriors of Arnor in this match but gained another Hobbit Archer.

Third game up and this being the first Campaign Scenario and I was up against Dave K's Rivendell Elves who are proving to be the early Company to watch. 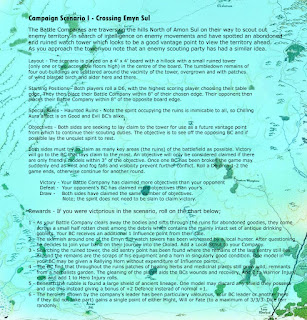 The Scenario is basically a Seize Ground Scenario where each of the Companies try to control the greater number of objective (a watch tower and four surrounding ruins) while having the added complication of Haunted Ground and a Barrow Wight somewhere unknown to contend with.

Initially my luck was in and I took out the only Elven Archer with my first shot but Dave kept his troops in cover while slowly closing ground on the Arnor Troops with the odd lucky potshot being stopped by the Elvish Armour. On closing on the second objective the Arnor troops disturbed the Barrow Wight but managed to rid the world of this evil spirit with ease much to my pleasant surprise, though this did split up my advance.

Quickly Dave closed the gap and made his move and easily weathered the one round of shooting in the open (five ones to hit was just rubbish but the luck was obviously siding with the Elves on the night) and jumped into melee.

After that everyone including the Hobbits piled in as there was no shooting into melee and numbers tell. 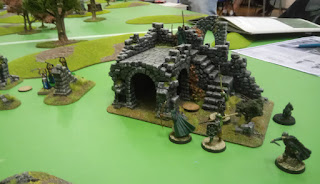 Surprisingly my troops held the line for three or four round with each side trading blows but failing to land a killing blow and then of course things turned and four of the Arnor troops went down for the loss of only one Elf. Eventually only a lone warrior stood and managed to fend off four Elf warriors for two rounds before going down refusing to flee to the end. Great game hard fought game but the victory going to Dave's Elves.

With eleven games down, the scores on the doors look like this;

So Good 6, Evil 4 so far (Total Victories counting towards the grand finale) and just for interest. 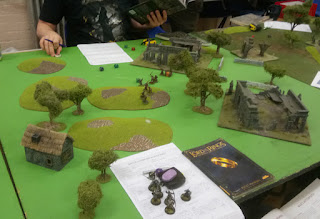 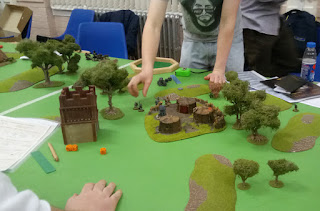 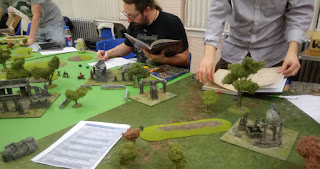 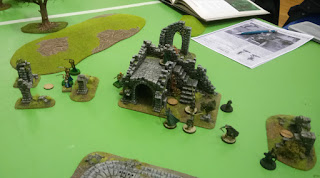 A couple of games to be had by the other players and then onto the next phase and another round-robin round of games for the second phase.

Looking forward to it.