I've just recently finished painting up the first batch of six barriers sections for use in my Future Wars project (and of course anything else suitable) with a colour scheme and look I had decided upon a while ago. 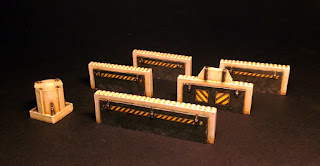 There are another eighteen pieces all of which are from Ainsty Castings are fairly ubiquitous around these parts for use in modern/ultra modern games.


The photo's show a slightly lightened version of the paint job and as I was going for a bit used and abused look, this has fairly well worked out. A couple of lessons learnt in the process of producing these bits, not so much in the painting of the pieces but mainly in the production and use of the water slide transfers I made for the pieces.


I made the transfers from downloading images from the interweb and adjusted/edited in photoshop and printed the images out on white transfer paper (to get a sharper, brighter image) and duly sealed the prints prior to use. I cut the transfers to size prior to use but noticed that once soaked and applied, the transfers developed a slight white edge around them where the colouring had leached slightly.

Now once applied and a quick run of wash applied to the edges of the transfers actually looked pretty good and a bit more 'worn' appearing, so a good accident as it were, but unintentional, so I would like to experiment and find out how to avoid this. Probably printing the transfers out on clear sheets will be the likely cure, but we'll see how this works out for clarity.


Having done this first batch as a trial, I'll produce the rest of the two dozen pieces and aim for a uniform finish, but with a bit of experimentation on the transfer front.
Posted by Hendrid at 00:15 4 comments: 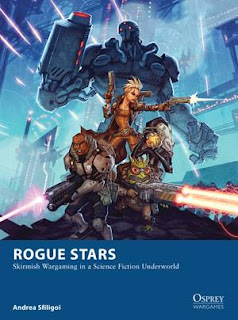 Well, maybe not actually frenzy, but keen interest may be more my level (not being the excitable type), OK Rogue Star Keen Interest is about at the moment with the fairly soon to be released next offering from the Osprey Gaming stable.


The rules are by Andrea Sfiligoi, he of 'Song of Blades and Heroes' fame (illustrations by Johan Egerkrans, who's work I'm not familiar with) and are a Sci-Fi Skirmish rules set. The Osprey blurb follows to avoid me paraphrasing;

'Rogue Stars is a character-based science fiction skirmish wargame, where players command crews of bounty hunters, space pirates, merchants, prospectors, smugglers, mercenary outfits, planetary police and other such shady factions from the fringes of galactic civilisation. Crews can vary in size, typically from four to six, and the character and crew creation systems allow for practically any concept to be built. Detailed environmental rules that include options for flora, fauna, gravity, dangerous terrain and atmosphere, and scenario design rules that ensure that missions are varied and demand adaptation and cunning on the parts of the combatants, make practically any encounter possible. Run contraband tech to rebel fighters on an ocean world while hunted by an alien kill-team or hunt down a research vessel and fight zero-gravity boarding actions in the cold depths of space - whatever you can imagine, you can do.'


Release date is scheduled for 15th Dec but Nick at North Star is running a low key Nickstarter for the project from the 1st November which nets you I think a free mini if signed up for.

There are a core of 17 figures due to be released to go with the rules, all based on the illustrations within the rules and sculpted by Mr Copplestone, so I will be snatching up these releases. Based on the pics released so far, they look to be very useful and full of character. 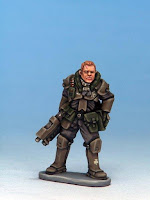 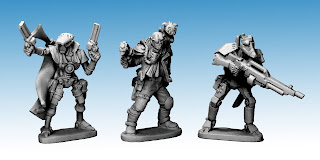 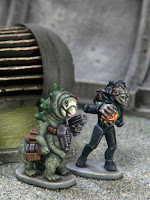 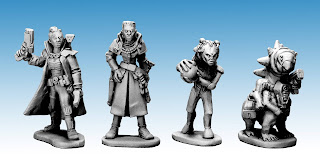 Obviously with these type of rules typical of Osprey releases, any figures can be utilised and I can foresee lots of Rogue Trader type figures being resurrected from the depths of cupboards and storage boxes for use with these rules. Terrain I suspect will be key to successful games here, so lots of terrain production required and enjoyed to look forward to.

I look forward to the release in a frenzy with interest...
Posted by Hendrid at 12:39 5 comments: 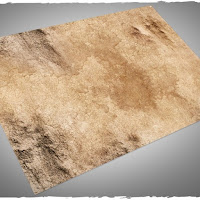 I had been thinking about picking up one of the vast array of game mats now currently available for some time and recently got around to doing something about it and picked up one of the Deep Cut Studio's 6' x 4' mouse mat material game mats via Weyland Game's.

Once ordered, the mat was shipped in very quick time and was in my possession with in two working days which I think is pretty good service.

The product however was slightly disappointing. The actual mat size, material and finish is very good and looks to be fairly durable. The only problem is the actual graphic displayed on the mat.

The actual image on the mat is of a significantly different colour than that indicated on the manufacturers web site. The image above taken with correct lighting correction is considerably darker and of a much more ochre hue than that of the marketing image.


I took a bench mark photo without lighting correction and you can see this is a lot closer to the marketing image in finish (though paler). Whether the difference in the image is due to printing error/differences or whether the the image on the web shop is at fault and not rendered correctly I don't know.

Now, I would say I'm intending to keep the mat as it is a nice product in it's entirety. It is however not what was indicated and in a product whose desirability is based solely on it's look, this difference is a bit disappointing.

I will probably get a bit less use out of the mat as the dark ochre/tan colour places it much more uniquely rather than the much lighter image which is a lot more variable but I will be looking into my next game mat buy a lot more closely before I part with a not insignificant amount of cash.
Posted by Hendrid at 17:17 9 comments:

The campaign continues a pace with the group squeezing in the next game pretty quickly since the last round and with Ian being kind to his fellow combatants had decided that he would not raid his neighbouring warbands of either Kev's Undead or Andy L's Witch Hunters but decided he'd rather do a bit of damage to Allek's growing empire (probably a wise move) and instead moved to raid the Witch Coven who were allied with Allek the Necromancer.

All the usual suspects were present in the form of Ian's Dwarves, Andy W's Skaven, Kev's Undead, Andy L's Witch Hunters, Dave's Marienburg Mercenaries and my Protectorate of Sigmar.

Following the previous games where they had been played on the usual 6 x 4 table and resultant advantages to random warbands on set up, things had been agreed to be mixed up a bit and the set up this time was on a 6 x 6 table with the unsuspecting Warlocks and guard Warg's in the centre and all the warbands equidistant around the table randomly selected positions.

The Dwarves being the winners from last time got a free move and were then the first to kick things off with a move towards the nasties and then the Skaven moved in the Dwarves direction being their arch enemies. The tooled up Mercenaries with addition of the freed hirelings from the Dalberz jail were next up but moved cautiously forming a bit of firing line as they began to advance towards the Witches territory.

The much depleted Protectorate with not much to lose and a lot to gain moved towards the Merc's in the hope to engage the much higher warband rated band to try and gain extra xp's. The undead without their leader moved cautiously to start and advanced towards the centre and the Witch Hunter's moved to intercept the Undead.

To the north of the Witch's hidey-hole the Skaven and the Dwarves clashed pretty much immediately and with decidedly poor dice the Dwarves quickly got the sharp side of the encounter and Andy's Skaven pressed the advantage.


The Protectorate advanced again towards the Mercenaries but with a pile of long distance shots coming from the Merc's the front cannon fodder in the form of the one Archer and one Crusader of the Protectorates were dropped and the Protectorate promptly failed their break test and decided it would be a great idea to be somewhere else. 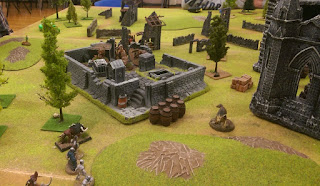 The Witch Hunters and Undead continued their solid advances towards the Coven and obliquely each other, the WH's taking out a rogue Warg in the process. 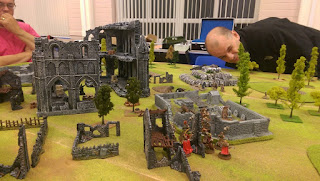 Things quickly changed in the following round as the fight between the Dwarves and the Skaven abruptly ended with all being much surprised as the Dwarves broke from a break test forced from their losses from the previous turn and took an early bath and the Skaven now turned their attention to a wide advance towards the Mercenaries and the Witch's Coven.
The Marienburger's continue their slow and steady advance with Dave's penchant for forming firing lines, and tried to take out the odd roving Warg with little initial success.

Mean while the Undead closed on some Resources and tried to attempt some destruction before the the Witch Hunter's could interrupt and spoil things.


The Marienburger's finally began to close on the prize and torched a couple of resource piles as they advanced and did manage to drop a Warg as they moved forward now with an eye to the advance screen of the Skaven coming from their flank.


With movement now pretty close to the Witch's Coven, the remaining Warlocks made a break for freedom while another Warg went down to the attention of the remaining warbands.

Without much effort the Skaven and Witch Hunter's did for the fleeing Warlocks with rats and missile fire and more Witch resources were torched.

The Undead broke pretty quickly from the fight with the Witch Hunters and took off to nurse their wounds and keep as much cash as possible and the Witch Hunters moved into and around the central ruins destroying any remaining caches they could find.

The Skaven moved to pick up some XP's from destroying any caches they could find on the north side and now moved into combat with the emerging Mercenaries. 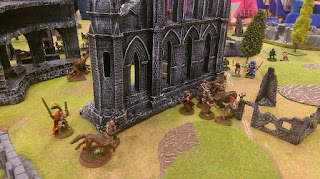 The Marienburger's attention was now split between the advancing Witch Hunters and the increasing numbers of Skaven forces.


Though the Skaven did fairly well in the ensuing skuffle, they failed to get the the dice result's and with a couple of losses, the inevitable break test was failed and the ratty-ones left the field having successfully split the mercenary forces up.

This just left the Merc's and the Witch Hunter's on the field to battle it out.

As the two sides closed in earnest, it was evens as they clashed with both sides one away from a mandatory break test.

Neither side held back and both put all they could muster into the final melee, but with the Merc's slightly poorer stance and the WH's much more consolidated the final fight was brief and the Merc's dropped a man first and failed their break test leaving the Witch Hunters victorious and their first of the campaign.


Another good barney and now roughly half way through the campaign, the bands are beginning to shape up (most of them anyway).


Things are getting tougher for the Warbands and with a 'good side' victory, the bands move again following the Witch Hunters to take out an outpost of the Necromancer and grab an heirloom to aid in the fight against the foul hordes (or destroy it to stop it being used).
Posted by Hendrid at 16:16 3 comments: