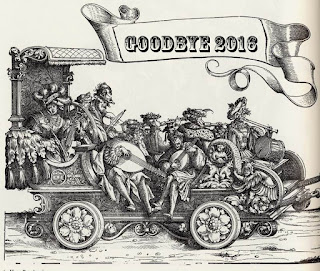 Looking back over the last twelve months, it has been very much an up and down year, much in common with most people, and the year has whizzed by with such consummate speed that at times I have struggled to keep up with the pace.

In regards to my year of hobby related activities, it has been much aligned with my year of life in general, no major upsets but time speeding by has left me wondering where all the time went and the general lack of progress on the various projects in hand initially annoying but now just putting this lack down to experience.

The amount and variety of gaming has certainly increased this past year and much thanks to all my opponents/partners in crime for seeing this positive development unfold; with a refinding of uses for my Empire army with 9th Age and Oldhammer gaming and Chaos Wars, some board gaming with AvP and the like, Future Wars antics, Urban War and Dux B and Mordheim campaigns, and a few newbies to me with the likes of Song of Blades and Heroes and Otherworld Fantasy to name a few show a good helping of SciFi and Fantasy gaming though I note a general lack of anything historical which is quite a surprise.

The year has been one of Kickstarters too, with myself buying into several of the croed-funding project which have all borne fruit with the various Nickstarter Frostgrave and Rogue Star projects being quite nice, figures abounding too with a particular favourite supplier with Steel Fist miniatures with very nice foot and mounted knightly models. Raging Heroes is the only one which I note a lack of major progress and although the first wave of releases have been sent including the freebies, there still remains a load of figures outstanding which is a trifle annoying, I think a noticeable victim of their own success but I wait for the remainder of the order with bated breath.

Online and PC gaming has been a usual part of my gaming activities through the year with a couple of games being particular favourites like Witcher 3 and Fallout 4 but a couple of the much sought after games released this year were a bit disappointing especially Total War Warhammer being the main culprit in this department, much too linear and not enough free-form gaming here but I suppose that was to be expected looking back. The X Com franchise was entertainingly added to with X Com 2 and I picked up a couple of table top ideas from this game in particular.

My painting mojo has been fairly lax over the last year but I'm not getting hung up on this and look to improve on things in the coming year with a more targeted approach, but we'll see. I did manage to get a bit of modelling and terrain making done over the year and look to build on this success and produce some major pieces in the coming months. The other part where much of my attentions have been focused is in the realm of terrain boards with some experimenting and some success too, so success here all in all and a good foundation as it were to build on.

Several surprises come from the last twelve month, mainly by their absence, not games of Frostgrave which I thought would be a bigger player in the year and as said earlier, no historical gaming at all. The whys and wherefores of these are probably legion and I don't intend to ponder over much as to why but look instead to rectify this state of affairs over the coming year.

All in all a different sort of year in the land of table top gaming from the one's previous but that, as they say, is a good thing. I don't think it pays to be too introspective or dissecting with your leisure pursuits though some idea of where your heading might be handy. I intend to do more of what I've been doing over the last year and some new stuff too with just a hint of some Old Skool for a bit of spice. Should be good.

I hope 2017 is kind and generous to all out there and that the year has lots of toys to play with and is full of gaming and friends to enjoy them with. 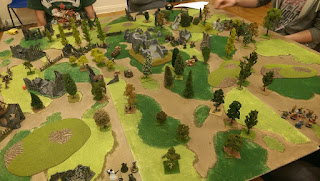 This next episode of the ongoing campaign was a bit of a side step to the main narrative where previously the bands had taken out one of The Necromancers Captains in an ambush while he had been searching for a relic in one of the ruined hamlets previously destroyed by the rampaging Undead horde.


This time the winner of that game had the opportunity to raid one of his neighbouring warbands in their encampment 'somewhere in the wilds' of the Drakwald Forest region. Kev being the Undead leader that he is swooped on the chance and plumped for a raid on his neighbouring Marienburger's who have been steadily growing in power so this presented too good a chance to miss to try and knock the Merc's down a peg or too.


So with all present; Kev's Undead, Ian's Dwarf Rangers, Andy W's growing Skaven pack, Andy L's Witch Hunters, my hard pressed Protectorate of Sigmar and of course Dave's Marienburger Mercenaries everybody lined up for a bit of a grudge (or should that be grudge's) match. 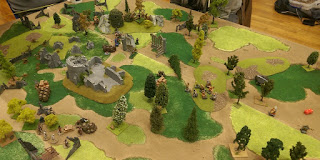 The Marienburger's being on home terriotory got to kick off the proceedings and immediately made a break for it, straight at their arch-enemies the Witch Hunter's.


The Witch Hunter's, slightly perturbed to be singled out in this way, made a side step taking temporary cover behind the nearby hill to take stock. Everyone else made moves towards the encampment and the waiting loot and XP's in the form of goods to be destroyed in the centre of the table.


The Protectorate's part in the proceedings was pretty short, given that they were down to five men from the start, as two of the heroes of the band were taking an enforced sabbatical for a round or two, and as they meandered unassumingly over in the corner, the Dwarf sharpshooter to their right, at extreme range, first dropped the Acolyte and then one of the Crusaders, so a much expected voluntary rout was duly called and the Protectorate played no further part to much hilarity all round.

The Marienburgers now commenced their attack on the Witch Hunters and an extended barney enveloped the hill with the Merc's charging in while leaving a screening line of archers to guard their rear from the advancing Dwarves, and then the Witch Hunters counter charging into combat with all their numbers involved in the melee. This proved pretty bloody for both sides and much chagrin from the WH side as Dave continued to throw sixes to a frightening degree but it wasn't one sided and both sides approached a break test at much the same time.

Elsewhere, the Dwarves, Skaven and Undead wandered into the encampment area and began to ransack their respective quarters with only a tentative skirmish between the rats and Undead squabbling over some booty to break the otherwise quiet half of the table.


The battle between the Marienburgers and the Witch Hunters continued unabated and uninterrupted for a couple of turn with the losses mounting. Much jesting and poking was had when Andy's Ogre Merc who he had been trying to defend was dropped and taken out of action, much to his chagrin. The only change in this was when Dave's rear guard volleyed at the advancing Dwarves and quickly took out out of their number who had exposed himself to the firing line.

By this time things quickly changed with the Skaven now avoiding contact with the Undead as their low Leadership prevented realistic charges against them, shifted focus and rushed into contact with the back of the Marienburg Merc's, coupled with the impending assault on the other side of the Dwarves now closing too.


All this attention now proved too much for the Mercenaries who with out anywhere to run, Dave decided on a all or nothing stance and manfully made his break test and the Mercenaries went down to a man, not one escaping to the closing encirclement.

With the Merc's gone and the remaining bands fairly well spread, especially the Skaven who consolidated their position and the rest hoovered up the last of the loot and resources, everyone took stock.

The Witch Hunters very badly bloodied called it a day and retreated to lick their wounds, quickly followed by the Skaven who saw no real point in hanging about with no more loot to get. This left the Dwarves and the Undead for a final show down once again.

The Dwarves drew back slightly and lined up to get a few pot shots at the advancing Undead. However the speed of the devil dog threw this idea out the window as it rocketed from the back of the Undead ranks and pinned the Dwarf line successfully while the rest of the shambling minions moved in.


The fight was brief and as soon as the Dwarves dropped another of their number Ian called it quits as he saw the way the fight was likely to go already on the back heel and no gain to be had.


This then left the Undead with another field victory (the fourth in the campaign so far) although mainly due to being the last to get into the fights so were largely molested until there was no benefit from prolonging the fight from the other bands.

Losses from the various parties were not severe, though noticable on a couple of counts with the WH's losing their Ogre Merc and a henchman type plus a couple of wounds, The Marienburgers went pretty much unscathed though due to the loss of revenue had to drop a couple of the Hirelings they had picked up in the Prison Break. The Dwarves loosing a fairly good henchman also keeps them at a lower punching level. The Protectorate do manage to actually get some cash and are able to expand their number to the dizzying heights of eight.

Next up is going back to the campaign trail and exploring the catacombs in search of the relic The Beast was trying to locate prior to being ambushed.
Posted by Hendrid at 12:30 4 comments: