Following my recent dissatisfaction with the current edition of the WHFB rules, mainly to do with the confining and slightly un-interesting army lists rather than the actual rule set, I had been thinking of going back to previous editions of WHFB to try out to see if the 'feel' was a bit more exciting.

Once the thought had occurred, it soon appeared that many others out there have had the same thoughts, in particular 3rd Edition which many appear to consider the best. It also turned out that many of the players at my local club had started wargaming with the 3rd Edition way back when.

So after some on going discussions and a re-scheduled game, we decided fairly spontaneously to have a small game as a taster to see if the idea had some legs. 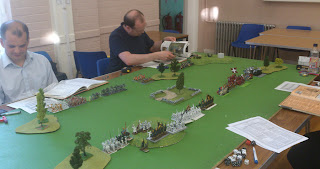 Four of us sat in on the trial with Kev, Andy, Ric and myself taking a 1000pt army each, taken from the Warhammer Armies book; Andy took his Bretonnians, Ric with Dwarves, Kev Undead and me with my Empire with a Human vs Non-human pair off.

The game went pretty well all told and even though there was a considerable amount of checking through the rule book to pick up on the differences in the rules, we managed to get the game to a conclusion, with the high Leadership and general toughness of the Dwarves (and a healthy amount of artillery) saw Ric duffing up the Bretonnians and some of my Empire too towards the end, and though my Empire saw some early success and looked to be winning early on, some unlucky fear tests saw the best of my army breaking and routing off the table in one round, so victory went to the non-human types. 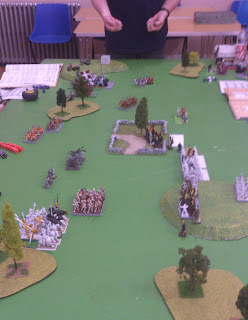 The concensus on the night that the rules did indeed show some promise, so some future 'Oldhammer' is definitely on the cards in the near future, though there was a couple of points that some House Rules are required to rectify, the only major one being the break test being changed to being altered by the amount a melee is lost as per the later editions of the rules but with an auto break after three consecutive push backs. It was noted that in some melees, you know who is going to loose but the melee continues a a shunt towards a side of the table which can be a bit dull.

There is undoubtedly an amount of nostagia involved in the Oldhammer thing and remembering simpler wargaming days is to my mind no bad thing. Even though I myself never really got into the Warhammer thing until the 6th Edition, I do remember all the miniatures etc and still own a fair number purchased for a more RPG kind of thing.

I also like going over a lot of the pictures and artwork in the books, as several of my favourite artists contributed to the books including in particular Ian Miller whose work I've always liked.

I don't think the rules will drastically improve my success rate any, but at least the army lists give a great deal of freedom into creating appealling armies with models you've already got and not limiting you to the next batch of new releases, this in itself enough of a reason to play 'old-style'. I feel some interesting scenario's coming up soon.