With my Garde Ecossaise unit coming on and the green stuff is flying everywhere, I thought I should look out the standard for the unit I was planning on using. I had tracked down the appropriate details of the standard from Ian Heaths 'Armies of the Middle Ages, Volume 1' quite sometime ago so I knew what it should look like.


Then quite a while ago I stumbled upon a very useful web site; The Danish Figure Games Association who have a marvelous selection of flags and standards for downloading from a range of periods including a good selection for French Medieval and Renaissance periods.
One of the standards there was just the standard described by Mr Heath so duly downloaded and saved said standard and stored it away for future use.


Now I have the where withall to do the unit I dug out the file and although useful I decided it needed a bit of prettying up, so with my first attempt in photoshop for doing a standard I did just that with the results above. It should hopefully grace my nice shiny Garde soon.


The Danish Figure Games Association website downloads page is worth a visit here for Medieval and Renaissance stuff. You'll be pleasantly surprised if you haven't come across they're site before.


Now that I've got the idea, I hope to refine the process and maybe produce some more standards for various units, might be fun to try anyway.
Posted by Hendrid at 23:47 1 comment:

Just picked this DVD up and watched the film with great interest, '1612', set in 'the time of chaos' with the Tsar dead and the Poles trying to muscle in and the only member of the royal family surviving is the Tzarina.... 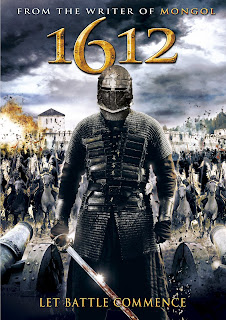 Two and half hours long and very 'Russian' the film is full of fairly graphic violence but not too gory but through out the film the uniforms, armour and clothing is very authentic for the period and full of nice little touches. Polish Hussars by the bucket load, Pacerni, German Mercenary Pike and Shot (who's firing drill is nicely portrayed) Boyars and so forth, all very niecly done.


The story follows a fairly standard route of the hero, a lowly serf makes good and proves to be a natural fighter thanks to the tutoring of a wiley Spaniard (shades of highlander here).


Generally not one for subtitled movies, but since the writer was the same one that did 'Mongol' which was another great fighting epic, I decided to give it a go and was pleasantly surprised.
All in all worth a watch since it can be picked up at your local supermarket for about £7. Recommended for anyone interested in the period and Russia/Poland, and the film is very Russian. The Priest in the tree is very good!

As part of my Italian Wars project I have now started on a unit that has been in the back of my mind to do for quite some time, namely the Garde Ecossaise (the body guard of the French Kings from the mid 1400's right through to the dissolution of the French Monarchy.

An early shot with the basic assembly done and with a bit of modelling to do with green stuff to fill in the gaps and model the surcoats over some of the armour;
A fair bit to dop but pleased with the look so far. I'm just glad that the Perry's brought the European plastic figs out, gives lots of possibilities for this kind of modelling.

Next on my desk is the next (small part) of my 'Abbey' terrain project, just a filler/sand alone piece put together while I'm casting loads of arches for the next couple of larger pieces.


A simple little piece but hopefully will add a bit of character to the final completed project.
Posted by Hendrid at 17:39 7 comments:

I have just purchased, at last, the add on for 'Mount and Blade: Warband' computer game, namely 'With Sword and Fire', this add on moves the action from a ficticious medieval mid 1250's setting firmly into early 1600's eastern Europe with Poles, Germans, Turks etc to play. It does look quite nice and certainly who can resist charging into battle in the company of Winged Hussars and Pancerni? Will give it a go and report back.
On a different note, a warm welcome to DaveK to the Warblog. When you going to get your own blog up and running Dave, you know you want too.


And on to the meat of this post, a few more pictures of the fayre on offer at this years Claymore in Edinburgh; 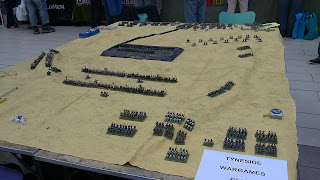 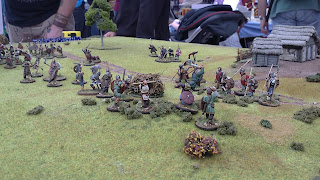 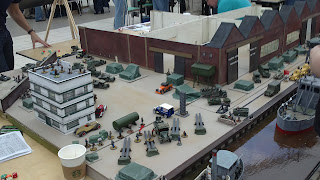 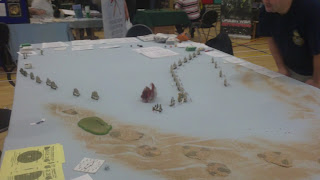 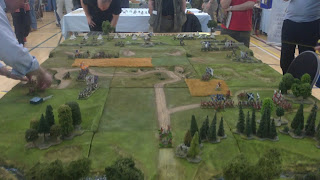 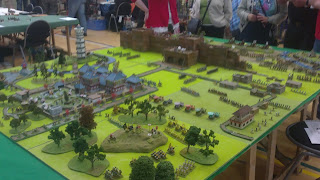 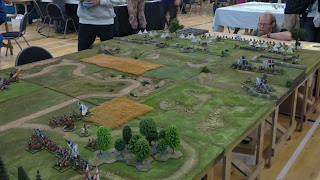 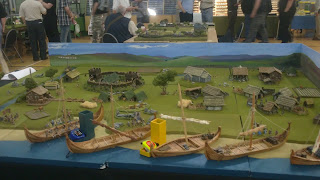 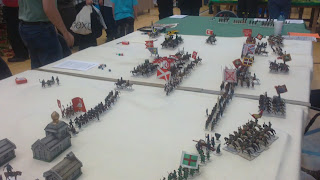 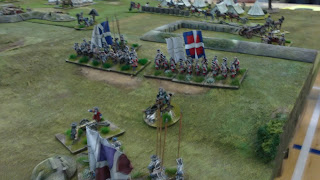 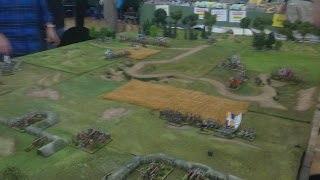 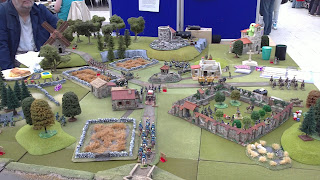 Good show and a generally good day.
Posted by Hendrid at 21:02 2 comments:

Another years show over and a good day was generally had certainly as far as the event went and the day out. Edinburgh was unfortunately absolutely jumping with the festivals first day and the rugby on, driving through the town took a bit of doing but arrived just the same.


A fair amount of games on worth looking at and many very good indeed, but none with a big wow factor, but several where it was evident the amount of work that had gone into their preparation even if it was only the sheer number of models painted ( a marvel that I always envy) and worth checking out none the less.


A fair selection of traders were present at the show with a couple of names changing and a couple of new traders to the venue were present and even though I'd gone to the show without any definite plan in picking up anything except the odd notion to get a new rule set or two I did manage to part with a fair few shekels on some Gripping Beast El Cid Spanish and Moorish Cavalry and a handful of Copplestone Cossack Cavalry plus a copy of Barry Hilton's 'Beneath the Lilly Banners 2' as planned plus the Extra Impetus army books 1 & 3 for their Italian Wars lists and the 15th Cent lists too. All nice books if a little expensive especially the Impetus ones. I also paid the Warbases stand a visit and picked up a few bits for a cunning plan.


I took a fair few pictures of the many table top delights on view but as it turns out using my phone was the wrong idea. All the photos turned out fine but for some obscure reason I cannot access them or download them directly to the PC, don't know why, so I am attempting to email a selection to myself from the phone, takes ages but we'll try and post some more soon. The wonders of technology, hmmm.


All in all a good day out and bumped into lots of folks which I only see at the various venue through the year so all good really. 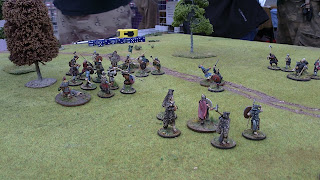 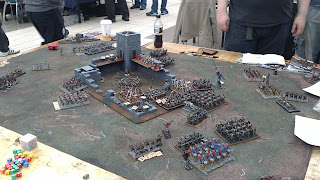 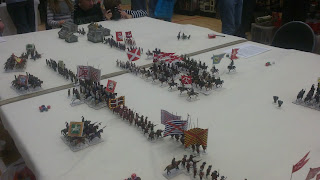 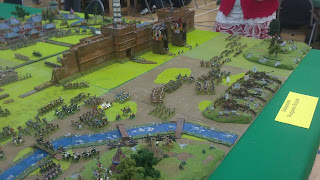 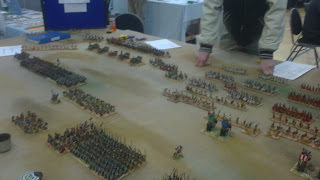 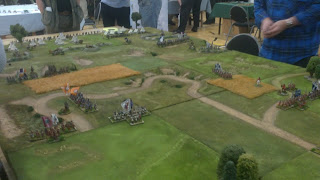 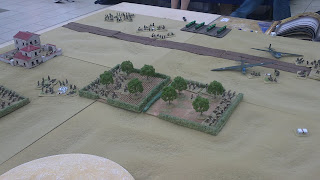 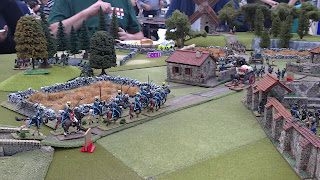 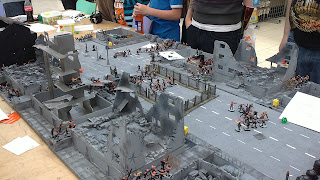 'Keeping it large and loose' this week and so not huge amounts done but chilled out and looking forward to Claymore 2011 tomorrow through in Edinburgh. Not planning on mega purchases but keeping an eye out for any shiny bargains and hope to snap a few pieces of eye candy of some of the nice games put on for the show. Should be good.

Also a welcome to the Warblog is due for Paul of the Man Cave whose blogs are probably well known to many out there with lots of gaming and modelling goodness, and to Christopher(aka Axebreaker) who is also out there on the forums and whose blog is definitely worth having a look particularly for all the Dark Age figures, I particularly like the El Cid stuff, tasty.
What I have been doing this week is getting lots of planning done and thinking out things for the various projects I've got on the go or that I'm planning on doing in the future with one coming to the fore, namely a French/Bavarian Malburian army and have been reading up on this and getting a bit of background. It's a period I've been interested in since I was a nipper reading Winston Churchills (The Life and Times of the Duke of Malbourgh' with it's very nice maps and stirring accounts of the battles).
This project some way off but likely to start next year and I'll be looking to pick up 'Beneath the Lilly Banners 2' soon for using with this one. Will see how this goes but looking forward even to planning this one in detail before I dive in.
My Italian Wars project has also received a bit of attention and a few more French and Italian Units have been planned and I have made a tentative start on a unit that's been in the back of my mind for a while, namely the Garde Ecossaise for Charles VIII on foot. A fairly small unit but still difficult to get the figures for the basic trooper but I've got started now using some Perry figures and will need to get busy with some green stuff. Will keep you posted on this one.
Lots of other things sizzling in the pan, enough to keep me busy for quite a while, sometimes it's good just to think about stuff and enjoy the planning and getting into a topic as much as actually doing it.
Anyways, see all at Claymore tomorrow and will report back for those who can't make it.
Posted by Hendrid at 01:02 6 comments: