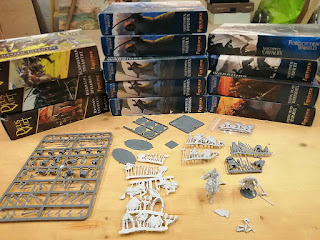 A couple of weeks ago, I received my pledge from Fire Forge for their recent Forgotten World Kickstarter.

As you can see this was fairly chunky in it's contents, 9 boxes of plastic Human and Undead Infantry and Cavalry, some additional sprue's of choice, additional embossed shields plus resin foot and mounted character figures plus I opted in my bonus for some Deus Vult range Scandinavian, Russian and Byzantine box sets. 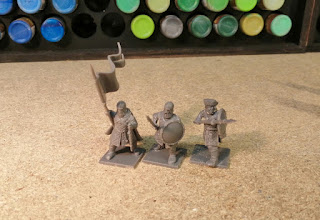 I've assembled a couple of the Human Infantry, with these (and the cavalry) being pretty generic fantasy humans in a sort of medium infantry apparel (looking much like the Stark GoT troops which I assume is deliberate given the 'Northern Infantry' nomenclature) and generally look the part. The figure parts do come with a lot of mold lines and all require a fair bit of cleaning up and some bits don't quite fit together without a bit of trimming but not too bothered about that.

Their are Infantry with sword and spear options plus a command conversion sprue all of which have a few options plus additions for packs and pouches etc. plus there are Bowmen packs and the Cavalry pack which I've still to play with yet. The above examples built show the general look of the assembled figures (with the figure on the right having a replacement head from the now defunct Empire Archers set). 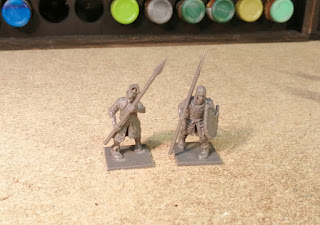 The Undead again are pretty generic in origin which is a good idea for this type of product really. Again, I've only assembled a couple of the infantry to see how they go together and these are generally fine but again a bit of mold line problem to be dealt with. With only 12 in the box for these, they do seem a bit pricey if paying full price for them but again are quite nice and do whats required of them. 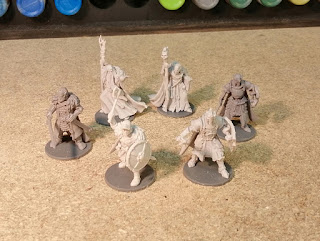 The bonus characters in the kickstarter are quite nice and Human and Undead forces catered for with generic 'good' General, Hero and Wizard types along with their Undead counterparts. These all assemble fairly well but the bits needed quite a bit of cleaning up where the bits came off the resin sprue and the fit is a bit loose generally and all will need a bit of green stuff to tidy up the joints. Again not a major problem and perfectly usable fantasy types. The foot undead hero is very lined from the (I assume) 3D printing process, but I'll paint up and see if this looks OK. To be confirmed here. 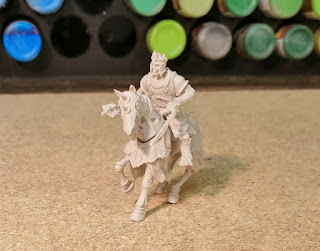 The only, as I see it, failure of the Kickstarter supply to date is the mounted Undead Lich. The parts really don't go together at all well with major gaps on the horse parts which will require substantial green stuff to sort and the rider does not sit on the mount at all well, even after major carving, like the rider is not meant for this horse. I'll persevere and sort the figure out as best I can but I'm sort of minded to not really try here. We'll see how I feel on this one and report back on progress if any.

The KS also included a set of fanatasy rules which on a quick flick through look OK but still to give these a thorough read to see if I'll use them or not. 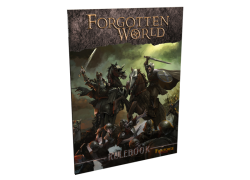 All in all, a good result on a Kickstarter with lots of usable figures which I'm going to use to fill some holes on my Fantasy Campaign Northern Wars theatre so that's nice, and the Kickstarter was fulfilled within a reasonable time.

On other KS news, I also received my pledge about the same time for the re-written Chivalry & Sorcery RPG rule set (pdf copy) which I'm still wading my way throught 500 or so pages of this to get the feel of the update but looks very pretty so far. 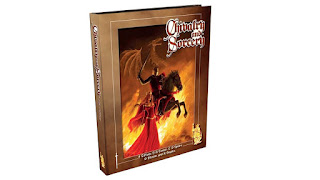 I've also received word from Yannis of Nuclear Shrimp that my pledge for their 'Black Earth: Heavy Metal' KS is now on it's way to me and will hopefully be with me before Christmas which is nice though that one has been a long wait but the figures and vehicles are very nice so I'm looking forward to these to add to my Future Wars project. 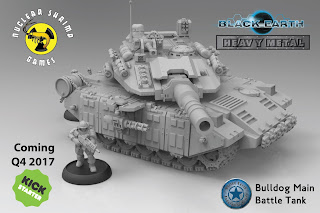