Just recently released by the Perry's again are a couple of further releases in their European Armies Range are some separate heads for Italians for the Mercenaries boxed set and round and oval shields as separates too.

The eye candy to go with the release are the Stradiots;


Up to the usual Perry standard and a useful addition to this useful and hopefully further expanding range. Though actually Albanian and the Balkans generally, they were brought into 'notice' by the Venetians, so come under the heading of Italians I suppose, hence the release with other Italian bits.

There haven't been many decent sculpts of Stradiot available (probably The Assault Group being the best available currently and Old Glory's older sculpts but with more variety) so these are a welcome addition.

I would like to see how they shape up size wise with the TAG miniatures to do a bit of mix and matching if possible, but we'll leave that to later in the year hopefully once I get some progress under my belt with the Italian Wars project first. I suspect that the mix and match here is not likely to work due to the differences in style but we'll check it out.
Posted by Hendrid at 18:34 5 comments:


I've now finished off the second Fire Team for the first section of my Mechanised Infantry Platoon for the Future Wars project, and I'm reasonably please with the results.

The completed Section now makes a small viable gaming team which coupled with the APC looks quite handy. All the figures in the section are Copplestone Castings. 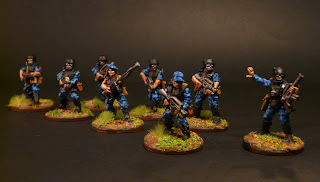 I also painted up an old Urban Mammoth character, Major Kali to add a bit of character for the force for a possible character/hero use. 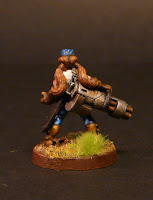 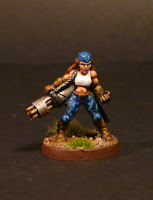 She certainly adds a bit of character to the project and no doubt will come in handy for scenario's etc. 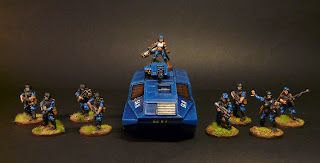 As you can see from this post, I've also been mucking about with photographing the figure's which I think can be a bit of fun in it's own right, and if nothing else is a bit of practice with the camera and photo editing software. All part of the enjoyment of the hobby really. 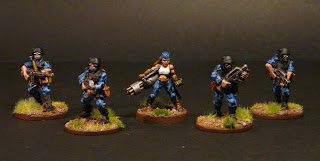 Now that the first Section is complete and out of the way, I have a clear idea of how to complete the whole platoon, which is just a case of plodding through the painting and getting it done. Should be fairly clear cut.

I have had the vague idea of expanding the force from the Platoon to a full Company, which would would be fun, maybe including Manoeuvre Support and an attached Assault Platoon, but I'll park that one for now. One reason for that being having checked on the Web that Old Crow is not producing his existing line at the moment due to working on some movie project plus new lines. This all sounds very interesting, and I'll be watching his website with interest, but a bit of a pain if your wanting to expand your current collection. I think you can contact him with a wishlist of his existing range and he'll get back to you. 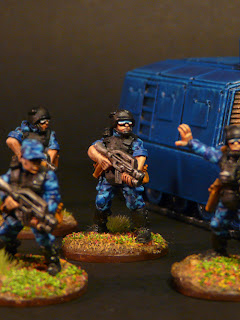 Anyway, I've caught up with this project a bit, and I'm keen to progress with it and get it up to the finish for the end of the year, at least to get the original Platoon complete at any rate.

However, next up on this project fairly soon will be...The Enemy. Watch this space.
Posted by Hendrid at 14:33 9 comments: 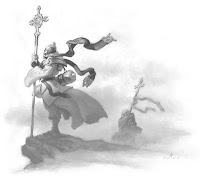 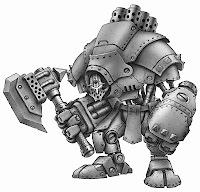 Once again the troops assemble for a tussle in the world that is Warmachine.

My Khador forces still needing the practice and require to hone their skills, and Jim's Menoth Protectorate were much the same.

We had decided on a thirty point skirmish with a no holds barred 'fight to the finish' game, so lot's of blood and scrap metal was sure to ensue.

The game was a great free for all and basically a ding dong battle with each of the forces dealing out what felt like huge damage in turn. First my Windowmaker snipers got wiped out by a well placed flame thrower attack which I hadn't expected in turn two. Turn three and Jim fell into my refused centre trap and I managed to jump on his heavy warjack and one of his light ones and reduced the heavy one to scrap in one turn and nearly take out the lighter too with a Warjack, Ironfang pike man and Man O War combo.

Jim's Menoth forces then retaliated and bashed the living daylights out my Berserker Warjack who stoically held the right flank on his own (but only just) and took out the last of the snipers and made a big dent in the Destroyer Warjack.


Khador retaliates and finishes off the first Light Jack, the Berserker makes a few swings but is really there to hold up a unit of knights on his own, the Juggernaut Jack plows into the nasty knight unit and takes one down, and the pikemen join in and drop another while my Warcaster Irusk drops an Airburst on the Menoth infantry which take 50% casualties and break.

Menoth once again swing into action, finish off the Destroyer Jack, the knights on the flank take out the Berserker (who even in death creates an obstacle) and the light jack moves out wide and manages to flame a third of the pikemen and the Exemplar Knights take out another couple while making a big dent in the Juggernaut.

Another round and another couple of Knights go down in the centre including one knocked down, another Airburst leaving a solitary Flame Infantryman and the Men O War close in for the kill to destroy the last light jack next.

Menoth hit back and the last of the pikemen go down and the Juggernaut takes a good hiding but the steel is taken out of the Menoth forces with a whole unit on the flank moving trying to get into the fight.

With the last gasp nearing I went for the kill. Another knight goes down, the Men O War charge the Jack taking it apart an my Warcaster loaded with focus sweeps round on the Priest Warcaster and off loads all his focus on his gun firing 10 shots at the priestly one and finally killing him with the tenth shot. End game, with a win for Khador but with only 5 figures still standing.

A good toe to toe, blow for blow, anybodies game game, but the early kills and the fire and forget Berserker occupying a nasty unit for what turned out to be the whole game sealing it for the Khador forces.

Enjoyed the game immensely and once again picked up some more of the niceties of the rules, so the learning curve continues.

I enjoy the depth of tactics that the rule set gives it's games, and in fairness, the amount of tactical gamesmanship that it affords. It isn't just the UEMC 'I got the latest biggest baddeest thing, I win' sort of game, in that each forces troops are fixed and every force has nasty surprises and all are capable of winning, you've got to use them right and have a bit of luck too, I like that. Also the size of games is of a nice size too. More a skirmish than a battle, which gives lot's of scope for story telling, cinematically or otherwise, a thing I like in all my games. If the game tells a good story, it doesn't matter in you win or lose, it's the story that counts.