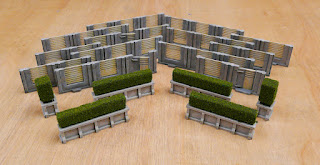 Just a small update on some of the terrain bits being worked on over the festives for the Future Wars project with the Modern Fencing set from Warmill being completed and the order from Miniature Scenary arriving before Christmas and the first part of that being completed in the form of the some urban planters ('Paranoia Hedges')..

Both sets were easy to assemble with the Ultra Modern fencing being supplied in coloured card stock with mdf bases, I plumped to paint the assemblies however as I wanted to get an overall colour on them (no unpainted card edges) and on my chosen colour scheme (which in fairness wasn't hugely different from the card colours anyway) as I wanted a pre-cast concrete feel. 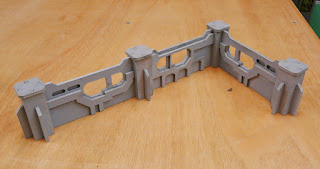 Another part of the Miniature Scenary order was for three sets of their 'Scifi Walls' which I've had my eye for a number of years and finally got around to obtaining some.

The first pack is assembled and undercoated with the individual secections assembled but seperate for alternate layout assembly. The miniature scenary kits I noted are a fairly loose fit for their parts and I'm going to have to fill a few bits, mainly the cap stones on the columns where the pegs leave a pretty large gap on them which irritates me a bit.

All in all some useful additions to the terrain options for the FW. 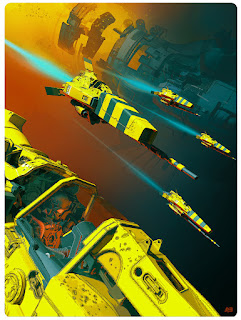 A Happy New Year to all and Best Wishes for the coming year!