Into the Valley of Death...

Earlier this week, I played a re-match of the game I had earlier in the year of WHFB using my Empire troops against Ians' Orcs & Goblins Army. Previously the game was a narrow victory to the Orcs after a hard fought match. This time though was the first outing of my forces using the fully fledged latest edition of the Empire Army book.

The game once we deployed was pretty much in the bag from the start for Ians' Orcs. I had taken my previous army list and re-jigged it using the new points values, this time to a slightly larger 2200pts match off. It wasn't much of a surprise that I ended up with less troops for the 2200 than I did for the 2000pts in the last match.


Admittedly, I did have a character, inthe form of Kurt Helborg in a unit of Reiksguard knights, to see what difference they might make, but otherwise a pretty light weight force. Ian unfortuneatly for my little force, had min-max'd his troop selection to deal with anything the Empire might throw at him. This included a reasonable firing line of bolt throwers, a rock lobber, a horde orc archers and a doom diver. He also had a front line of a solitary troll and three of the giant squig mangler things. As the game turned out, he probably didn't need the rest of his army, in the form of two orc hordes, a couple of goblin chariots and a couple of small wolf rider units.

With little in the way of meaningful fire power, my Empire forlornly charged forward into the teeth of the storm.

Needless to say, most of the troops never made it to the Orc firing line, either shot to bits, or swathed down by the sgiug mangler things. Even the mighty Empire general and his knights didn't even get the swing a sword as they were quickly cut to bits and the general dying ignominiously with a doom diver to the head.

The mortar and it's crew were the hero's of the story with three direct hits in three rounds on one the orc units and nearly braking it. The pistoliers also managed to survive to the end and took out a unit of wolf riders.

All in all not pretty, for the Empire at least on their first outing for the new lists, and another pretty odd match with a reversal of traditional roles with the Empire charging into an Orc line.

In brief, I feel that to 'win' with the army now you need to go down the route of lots of cheap hordes, the same as lots of the other armies have gone one way or another. Not a problem in it's self, but it's not the Empire image that got me into the army, and indeed WHFB, in the first place. I will no doubt continue to have the occasional game with my Empire in the future, but I will stick to the army I like, which may mean a battle lost before it's begun.

The Perry's have released the next wave of their European Armies Range which include most of what you would need for fielding a late medieval Italian army. 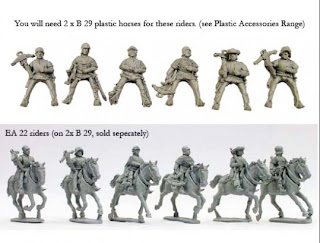 The mounted crossbow, I hadn't seen previously but were on several peoples wish lists (and radar) and are were a pleasant surprise to me.

Another addition to the list of releases was the handgunners set;

Along with these and the other sets; crossbow, light infantry, command the carroccio set has also been released. 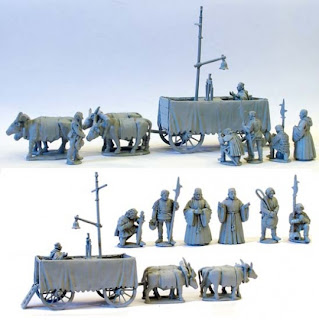 I like this set particularly even though it is really for an earlier period than I'm focusing on. The set is also available as seperate parts; wagon/oxen/figures which is a thing I like with the Perry's wagons and similar kits and makes doing diorama's a bit easier.

I will be getting this set shortly to go with the Clergy models already on the painting table and will form the centre piece for my Italian Army camp.

Not sure if the Perry's are planning on any other future forays into other European Armies or not, I hope they are.
Posted by Hendrid at 12:52 1 comment:

So the ultimate round of our occaissonal Mordheim Campaign has come round and there was a full turn out for the final.

Myself with the Nuln Gunnery School, Kev and his Reiklanders, Dave with Sisters of Sigmar, Ian's trusty Skaven Horde, Ken and his son with Hobbits and Bretonnians respectively.

The scenario for the final was the trusty Monster Hunt, with the Monster in question ensconced in it's lair in the centre of the table being a Griffon.

Set up complete the bands entered the ruined streets carefully with the Green Horde of Skaven moving towards the Hobbits and Bretonnians, the Sisters skirting round towards the Gunners, and the Reiklanders and Gunnery School moving towards the centre all moving cautiously. The Hobbits, ninja-like, moving as one zig zagged through the ruins single mindedly. The Nuln gunners opening up the fray in the second round with a fusilade of fire taking out one Sister and winging a couple of Reiklanders but not taking any out of action.


The early game consisted of the Gunnery School moving and firing from cover towards the Reiklanders and causing little damage other than a couple of stunned and knock downs until into charge range which went in a bit piece meal and the Reiklanders showed the gunnery school how to shoot and fight and took out half the warband in two or three rounds, including the frenzied Gunnery Officer with a brace of pistols and swordsmanship charged in, failed failing to hit even once and was promptly ToA by a lowly pleb. And so the Gunnery School was the first out of the fray fairly early on.

The 'Green Horde' of Skaven moved over and sniped a Hobbit or two as the weaved through the ruins, and then clashed with the Bretonnians who eventually gave up the ghost a short while after the Gunners.

The Sisters, having decided to avoid the fire power of the Gunners moved cautiously towards the the Skaven who in turn guarded their flank, and the Sisters fired off a few rounds at the Griffon but to no effect.


With the Gunnery School and Bretonnians out of the way, the Reiklanders moved forward while re-grouping and the Skaven also consolidated, pulling back from the Sisters advance.


Then the Hobbit Strike Team swooped. In a tight formation they struck at the heart of the matter and boldly took on the Monster direct. And with lighting reflexes managed to take two wounds of the beast.

With the Hobbits breaking the duck, everyone standing now moved to the centre and looked to join in the barny. The Sisters having positioned themselves, dived in first and tried to batter the Griffon before it noticed. The Skaven then surged forward en-masse and tried to batter the Sisters before they noticed. The Hobbits battered the Griffon some more and some became Griffon fodder, and the Reiklanders took up positions up on high and tried to pick off a few of the Skaven stragglers and moved to intercept the rest.


The stramash whirled for a round or two, with the Skavan, Sisters, Hobbits and the Griffon taking lumps out of each other and the the Sisters and the Hobbits taking the worst of it.


The Reiklanders next moved into the fray and the whirling melee developed arms and legs.

With yet another Hobbit getting eaten they eventually broke having done a sterling job in stirring up trouble. 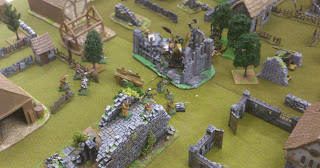 The last remaining Sister then managed to take down the Griffon within a mighty hammer swing     before succumbing to the dreaded morale check.

The Reiklanders then went and with a pretty successful round of shooting managed to take out three Skaven including the Green Horde leader causing a morale check at a reduced level which was duly failed. And so so the Campaign was won by Kev and his Reiklanders and who picked up the great prize, a box of Cabury's Heroes for his trouble.

A good fun game to end the campaign with a pile of laughs and much grinding of teeth, and everyone is now looking to see when the next campaigns going to kick off.