Last week myself and Dave K wound up the WaC machine and had another outing for our Berbers and Andalusian's for another trial game with a bit more knowledge behind us.

We went for 2500 pts a piece to give a bit more scope for troops on the field even though this was probably a bit too large a game to be likely to complete on a club night.

My line up was fairly similar to the previous game but the change was to ditch the skirmishers and add a small unit of mercenary knights plus a unit of Mercenary Spear. The Archers being added to the spear units to make up two large combined Spear/bow units, and the addition of a Captain. The General upgrade was ditched as well. Dave's line up was pretty much the same as before with the addition of more jinete types to fill out the points values but still went for the big unit of knights.

We went for clear and boring table to simulate the plains of Spain (and more importantly, keep the rule's simpler so we could concentrate on the moving and combat).

With a better understanding of the rules this time round we got much further through the game but still didn't manage a conclusion, though this was more to do with army size than rule checking this time round, though there was still a fair bit of that. 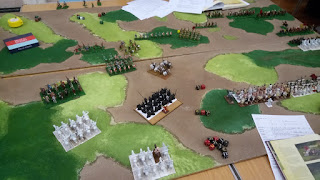 The game was much more balanced this time and produced much food for thought.

The combined arms units were quite powerful but more aligned for defence as the bows massed fire could only be used stationary so Dave pretty much avoided these keeping clear of their fire power especially the Merc's. In future I would probably field more but smaller units to give a bit more flexibility.

The small unit of Merc Knights proved to be too small to be really useful (at 6 Figs) but still held up the cavalry flank but were really too fragile.

The Berber Cavalry faired pretty well against the Knightly types causing mild casualties and remaining out of contact with their feigned flight and would hopefully draw the knights off the table or put them out of position for long enough for the game to be decided else where.

With the bulk of the Infantry not coming to blows before we ran out of time, not much was picked up here, but I did do a unsupported advance with my Guard Cavalry to see what would happen and a few points were noted here in rules terms mainly about counter charging.

Another interesting game with much food for thought, though Dave has a slightly jaded view of the rules we will have some more games to try and at least get a game to a conclusion. I find the rules fairly light and quite easy on the brain, just needing some familiarity to smooth things and certainly take out the extreme results that WaB was prone to quite nicely.
Posted by Hendrid at 12:37 2 comments: