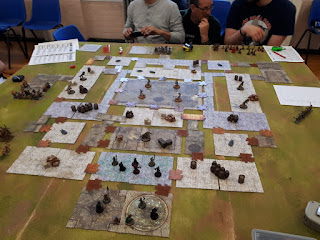 We had finally arrived at the finale for the Mordheim Season 3 campaign with the Warbands picking their way through the ruined and crumbling edifice that is 'Slayer's End', the hiding place of Allex the Necromancer and his surviving minions.


All the campaign participants had managed to make it for the finale and the role call of the bands is in the order of play as determined in the previous game results; Ian and his Dwarf Rangers, Kev with his Vampire led Undead, Dave with his Marienburger Mercenaries, Andy W's Skaven Horde, Andy L's Witch Hunters and lastly my Protectorate of Sigmar. 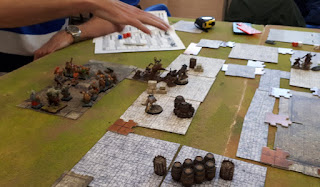 Of course, things did not go as planned, at all. From the beginning, the Dwarves did not want to go into fight the bad guys and have the Skaven appearing at his back in three turns so Ian sat in his deployment for three turns waiting for the Skaven to show and duff them up instead.


The Undead did move into the ruins and made pretty short work of the few Giant Slater's that barred their initial path . 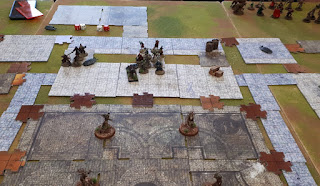 Next on the scene were the Marienburg Merc's who though being a shadow of their once mighty selves charged in with gusto and tackled a couple of Wargs lurking in one of the main halls. 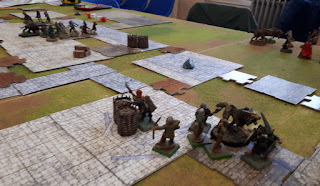 Andy's Skaven duly appeared and were jumped on by the ambushing Dwarves but managed to screen most of his band with his Rat Skirmish Screen and made a dash for the door. 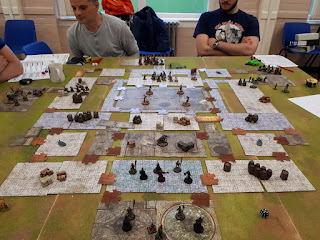 The Vampire Crew continued their purposeful march straight through the Halls and entered the central courtyard where a group of the evilly Dryad types where hanging out and over the space of a couple of turns dispatch the four evil spirits in fairly short order. 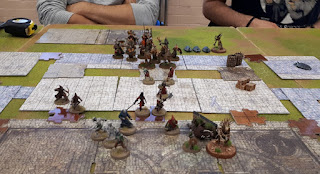 By this time though, Andy's Witch Hunters had made their appearance and were now stalking up behind the Undead. However Andy and Kevin made an agreement not to beat each other up (at least until the 'bad guys' were out of the way, so the Witch Hunters began to side step the Undead and make their way more towards the Skaven and Dwarves.

The tail-end Charlie the Protectorate now made their appearance and as the Marienburgers were still clearing their feet with the last Warg, Dave sent one of his best men 'Edward', a heavy hitter but suffering from Stupidity off to slow down the Protectorate to make sure they didn't cause issues there. 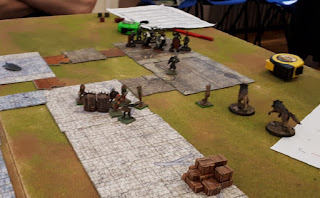 The Skaven, not wanting to hang around and be entertained by the Dwarves skedaddled past the Dwarves and jumped the Wargs patrolling the West corridor and barely 'paws'd' while taking out the speed bump while leaving a rat forlorn hope to delay the Dwarf pursuit and they continued speedily towards the objective. 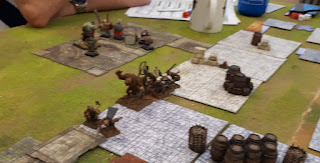 The Undead finished off the Dryads and moved onwards towards the objective too with a possible clash with the Skaven looking likely and the Witch Hunters skirting round the courtyard and seemingly keeping to their pact with the Undead to not cause problems until the Necromancer was dealt with.

The Marienburgers moved onward into the ruins too but fed another Henchman to the Protectorate who moved out into the East Corridor now pursuing the Merc's, but the Protectorate were charged by the a surviving Giant Slater who had been over-looked by all before and now held up the Protectorate. The Merc's charged into another Giant Slater intervening in their passage and diced it into cubes in fairly short order. 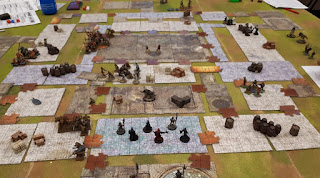 Things looked to be going fairly well at this juncture and with the Undead, The Skaven and the Marienburgers all closing fast on the Necromancers lair and only a couple of out lying gribblies still causing mischief it was beginning to look like a big clash for the demise of the Big Bad..... However, things went astray from here once again.


The Dwarves began moving out of their corner at last and began the trek towards the objective and having now lost 50% of their number on clearing the last of the obstructing Skaven rear guard made the first of many break tests successfully.

The Skaven rushing through the ruins skillfully and the Rat Ogre demolished a Giant Slater with barely a pause in stride and moved into the outer sanctum of the Necromancer lair where they traded blows with the Warlock, the leader of the Witches Coven and a couple of Undead types but on the loss of one of their number to a well placed no save spell from the Warlock the Skaven were put below their break point and at a 6 or less (rubbish Skaven Leadership) promptly failed and fled the scene. 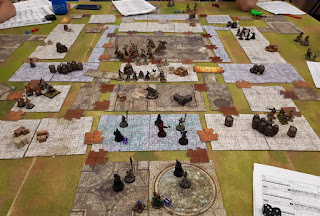 To add to the mayhem, the Witch Hunters decided they didn't want to tangle with the Dwarves and take a long way round decided they would attack the Undead and piled into the rear of the Vampire Crew who for obvious reasons abandoned their advance on the prize and turned to face the new threat. 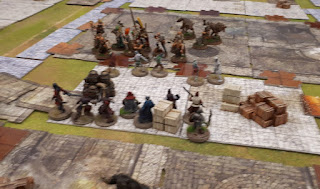 Things from here broke down to say the least. The Dwarves manfully continued their slow progress directly towards the objective making repeated break test throws in the process, and managed to throw a few distances punches at the Necromantic Crew. The Marienburgers managed to advance to within a pistol shot of the outer sanctum too and traded a couple of bullets at the Undead types but failed to advance further. 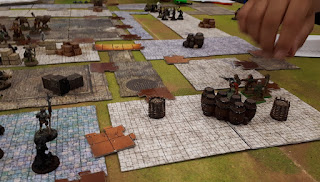 The Protectorate, not wanting to leave a quarter of their number behind, waited while repeated attempts failed to dent the armoured back of the beastie and left them looking pretty useless (which they were). 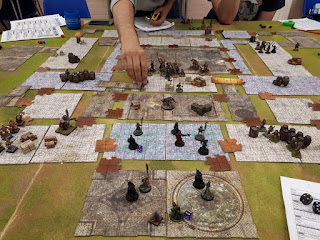 And the Witch Hunters and Undead proceeded to take lumps out of each other oblivious to the task in hand and their surroundings. 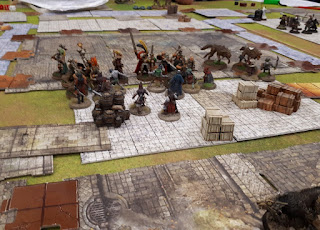 In the end we ran out of time and with the remaining bands looking like they would be pretty shaky before managing (if ever) they managed to make it to try and duff up the 'bad guys' we called a halt to the proceedings. And so after a most lengthy and hilarious trawl through the ruins, a bemused Necromancer lives to tell the tale once again having watched the bands more interested in beating each other up rather than him. 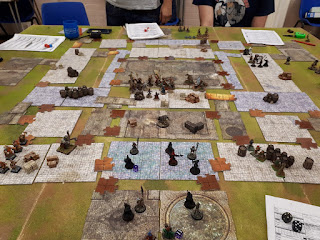 The campaign has now concluded with a slightly disappointing ending as no winner emerged once again but the final game, and indeed the whole campaign, has been a joy to play and lots of fun with the guys playing which is what it's all about. Thanks to all for an entertaining journey through the Drakwald Forest once again.


We're already looking at what's going to be next and are looking at something hopefully a bit different for the next campaign. Watch this space for the next season.....