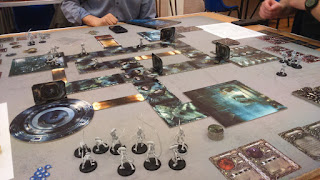 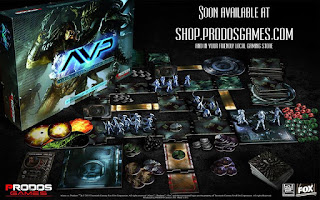 That said, we all had a fun game and look forward to play AVP again. Think that says all that needs to be said..
Posted by Hendrid at 19:54 3 comments:

Song of Blades and Heroes (and really jammy dice rolling)

This weeks gaming experience was a try out of the fairly long standing rule set for ' A Song of Blades and Heroes'. I had obviously been aware of the rule set for quite some time but hadn't had the impetus to try out the rules until Tim at the club proposed a game for anyone to try (being a long standing fan of the rules).

Tim and a couple of his compatriots put on a couple of games and myself, Kev, Andy and Ric tried our hands at the scenario's the guys put up for trial, paced at the beginner level to sort out the rule basics.

The scenario I played a couple of times was a basic Catchers-catch-can with three bands dueling in a form of gladiatorial set up, bare arena and a big pit in the middle.

Kev taking a Human band, myself and Andy taking the roles of a couple of Dwarven groups with Tim umpiring the event. Ric and Sam et al, played a larger scope but smaller scale (15mm) barney set in a village. The objectives were to take out the opponents Warband Leaders by any means possible.


The first game was to say the least frustrating in that Kev and I were unable to beat Andy's group regardless in what we attempted to do as Andy proceeded to roll throughout the contest an obscene number of 6's, continually. The less said about this first game the better, other than to say I was taken out pretty quickly and not long after Kev, but we did get to know the basic sequence of play and picked this up pretty quickly. 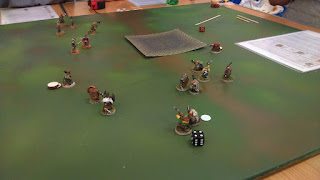 As the first game was over pretty quickly, we played the scenario again, and just to be stubborn played the same bands again to see if Andy's luck would hold out but hopefully not.

As it was to prove, The jammy dice rolling did abate but slowly but this time Kev's band couldn't do much right and was quickly put to death with his leader going down surrounded by a mass of Dwarves. Heroic stuff.

In the end the two dwarf bands battled it out in a fairly even fashion and going down to four warriors each and toe to toe my band picked up a pace and managed to take down Andy's leader with a bit of luck.


In summary of the nights gaming, I found the Song of Blades and Heroes rules pretty easy to pick up (in the basic set up we had to trial) and I can see the appeal that it has to many gamers and the on-going depth and development with addition resources released, I can see that it would be a fine skirmish, or indeed larger fight, set of rules themed around what ever figures you have and as it is scenario driven, could lead to some interesting and memorable games. If this was the first rules of the genre you can across, you would probably stick with it.

However (you knew there would be a however), having played innumerable skirmish rulesets, some good and some bad, I don't see that it particularly offers anything extra or a flavour that is missing elsewhere. A matter of taste to the rules really. I did find a couple of the mechanics a bit jarring but that's down to what I'm used too and nothing really untoward at all. A more involved scenario I think would be in order to see how a more complex arrangement played out to get a better flavour of the rules is required.

A fun game for the night and thanks to Tim for putting on the evenings entertainment, no doubt a further adventure into the realm of SoBaH's will be due soon.