Our intermittent Mordheim Campaign continued this week with the fifth and penultimate game, The Raven Barracks scenario.

Number were a bit depleated but Ians' green Skaven, Kev's Reiklanders and my own Gunnery School Cadets took to the streets to chase down some loot left in the ruined barracks to try and tool up a bit for the final match in pursuit of the Great Prize.

Deploying equally spaced the Skaven opened up the proceedings, and took an early lead racing into the ruins and tagging a couple of crates very quickly, with the Reiklanders and Cadets moving at a more measured pace. Ians Skaven having had a good run in the campaign so far number twenty bods and are pretty nasty and fast, so both myself and Kev decided the rats were the 'Clear and Present Danger' and quickly opened up on the furred horde with all we had as they scampered about and looked to grab everything in sight.

Unfortunately for Ian, Kev's Reikland archers who have had a complete duck in the shooting stakes in the campaign so far (Kev stating that his goal for the game was for one of his archers to actually cause a wound and he would go home happy) managed a couple of rounds of pretty impressive shooting and dropped a passle of rats and took three or four out of action. Coupled with a couple of lucky shots at long range from the gunnery school, caused the skaven horde to do a rout check which with the odds against him, Ian promptly failed and was out the game early, and unexpectedly.


This left the two human warbands to battle it out in the streets, and very quickly the game seemed to morph into a game of Urban War as the two warbands took cover behind walls and rubble and took pot shots at each other, sniping away while a couple of tussles developed on the two flanks, one between some henchmen on one side and between the two warband captains and a hero each on the other.


Luckily for me, and unlucky for Kev, his archers shooting returned back to normal and the Cadets got the better of the fire fight (gunpowder rules!) and my frenzied gunnery captain managed to take out the Reiklander leader and cohort. And true to the heroic struggle it came down to both warbands on break tests with Kev failing first leaving the Cadets in possesion of the streets but only half the booty having slipped off with a couple of crates before the end.


Another fun game but always going to be a difficult one for someone as three is always a difficult number as someone always gets picked on first (sorry Ian). The final fight could easily have gone either way with it only down to who failed the break test first.

The final game in the campaign will be soon, with the Great Prize awaiting, but guarded by a fearsome beast in the form of the Monster Hunt Scenario, so some team work (up to the point where the beast dies anyway) will be required to succeed. Should be an interesting finale.
Posted by Hendrid at 23:48 4 comments:

Perry's do it again...again.

Release really excellent, must have figures, just right for your current project that is.

The latest releases for their European Armies range are once again absolutely spanking.

The release includes the very nice Italian Clergy which I can think of lots of uses for in terms of vignettes, set pieces and camps plus attending a carroccio and so on. Some of their best sculpting.

Again very useful and very Italian are the Personality figures, including the famous one based on Niccolo da Tolentino from the painting the Rout of San Romano triptych. The other two perhaps more readily usable but all good non the less.

The third of the release are once again suitably attired and will certainly join the ranks of the burgeoning (slowly) Italian forces for my Italian Wars project.

They've also released a couple more wagon/cart things to add the the growing range of accessories for the WOTR range which again are all very nice and useful sculpts.

The problem I have with the Perry's prolific output is that they keep on releasing great models for lots of ranges and they make you think of uses you could use it for rather than having the need in the first place. 'Shiny, ooooh..........'

The press release also states that this is the first half of the months releases and that there will be more up soon. Watch that space.

Those lucky enough to be able to get to Partizan coming up, will be treated to the Perry's putting on a WOTR game there which going by the one photo I've seen will be up to their usual standard.

I'll definitely be purchasing some of these new releases, as soon as I get paid that is, having just purchased some Italians from Venexia, the money cupboard is bare this month. The Venexia mini's (bought through Vexillia) are pretty good and very compatible with the Perry stuff if very slightly smaller but not so you would notice in the throng. I've had my eye on these for quite a while and decided to get some when I heard the company may be going under which is a pity as their stuff is very nice and their 15mm stuff quite expansive. Hopefully it won't happen.

I'll post some piccies of the Venexia figs once I get them assembled.
Posted by Hendrid at 19:24 4 comments:

Another great show now done and dusted all the liitle Carronade Crew helpers were tuckered out after the days exertions but all enjoyed the day in what proved to be one of the most successful shows yet.

Haven't had the official numbers yet but there seemed to be a few more through the doors by about 1:30pm than last years total, and talking to few bods briefly all the traders and clubs seemed to have had a good day too.

Didn't have a huge amount of time to take in the show in any detail being generally ensconced upstairs with the Painting Competition and Flea Market and generally running about so didn't get much of a chance to speak to most of the people putting on games and such and catch up , but did manage a once round all the games on show and managed to take a few photo's of same and then later on in the afternoon I managed to check out a couple of the traders to pick up a couple of bits I wanted to pick up. 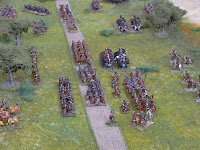 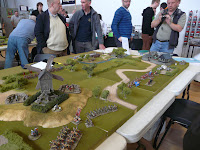 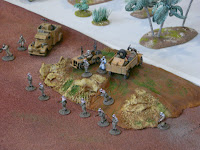 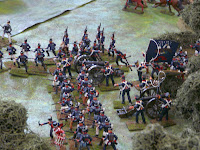 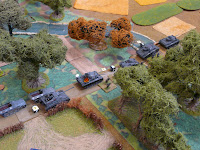 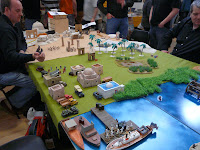 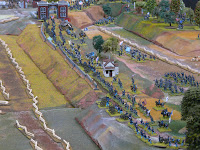 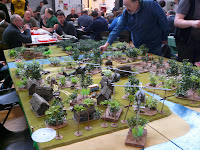 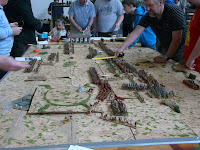 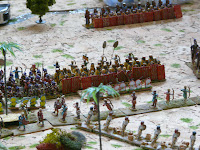 The show was once again attended by about thirty or so clubs local and from further a field who all once again put on a great variety of games, large (some enormous) and small, and again a good number of them participation games so you could try your hand on lots of different styles of gaming. The Fantasy lot up stairs particularly took to this and there was a good take up on a lot of participation gaming there.

The painting competition was attended by approximately the same number of entrants as last year but the Historical Unit category was particularly hotly contested this year, and the Junior and Vehicle categories being down considerably.

Thanks to the Painting Competition judges; Brendan, Mark and Andy for taking time out of their day to do a sterling job on some tough categories, and thanks to the traders for sponsoring the competition with some damn good prizes too.

Didn't get a chance to find out the winners of the best games etc but will do soon, and post the deserving names and games here.

So now all are recovered and the pennies are spent, we'll start to plan next years show and try and improve on things once again, though I can't promise that we will but we'll try.

I'll post a few more photo's real soon for the peeps who couldn't make it to sunny (but chilly) Falkirk for the show, but for now I'm away to play with my ill gotten gains.
Posted by Hendrid at 22:52 6 comments: