If You Go Down to The Woods Today....

The next round of the club occasional Mordheim Campaign was again a slightly different scenario with the 'march' to the great prize continuing this time through 'The Wild Wood', the scenario from the Nemesis Campaign where the adventuring warbands clash in an enchanted inhabited wood. The inhabitants are a number of mischievous and spiteful woodland spirits.
The warbands on the field on this outing were once again my Gunnery School Cadets, Iains Skaven, Kevs Reiklanders 'The Hicks from the Sticks', Kens Reiklanders ' The Bling', and Barry with Another Skaven horde. With uneven numbers playing and a couple of last minute no-shows the game was going to be a quick one only slowed down by the uncharacteristic mutual agreement to do away with the woodland sprites as quickly as possible which proved to be a pain in the butt pretty quickly especially to Iains Skaven as the random movement of the various spirits more often than not involved heading towards his warband.


Once the last of the Sprites was disposed of, (the last one taking out my Senior Officer in the process, oh the shame), the warbands got down to the real work on hand and proceeded to belabour each other once more returning to character.
Barry made short work of Kens depleted Reiklanders and Iains Skaven swarmed over the rear of my Cadets while Kev made short work of the front, and then they proceeded to batter lumps out of each other with Iain making a slightly better show but not by much by which time Barry's largely untouched horde was beetling up fast decided his now outnumbered remnants should show their true colours and beat a hasty retreat keeping in character with his warbands tenents, leaving Barry the victor of the field.
A pretty open field giving archery, slings and gunnery the upper hand (not that you would have noticed by some of the dice rolls (Kev)) but next time up the bands are moving into the 'burbs' of the great city so a bit more close quarter action will be the order of the day.

The penultimate battle in the current round of the club Warhammer Campaign was this weeks club game. The Empire relief column has pinned the remnants of the Ogre invasion force and they have holed up in a defensive position, they know they're going down but can they hold out for long enough.
The battles' outcome is not in doubt its when the inevitable comes. Iain managed a stalwart defence and took the game to the wire and  his idea of gnoblars to slow down the onslaught was a good one, but in the end it was down to the charge on round four with the Empire managing to slay the last ogre just in time to snatch a minor victory, generally aided by some jammy dice throwing especially in round four and getting just what I needed to get the right number of casualties. Also once again the Great Cannon Bertha failed to cause a single wound on the enemy but also managed to refrain from blowing up.
Now the Margrave and his force is free to march to the relief of Almsburg and the Baron. Will he get there in time? Keep watching to find out.
Posted by Hendrid at 19:27 No comments:

This weeks game at the club was a pick-up game of WHFB with Barry and his Skaven against my 'trusty' Empire forces. Haven't played against Skaven since at least two editions of Warhammer ago and Barry was using the 8th Edition version so this was going to be an education to say the least.


Things started out fairly well with Barry giving me the first move and me taking out a unit of Globadiers, his Rat Ogres, a unit of Slaves and a couple of odd bits and bobs of add ons to units and a few casualties here and there by the beginning of round two. From then on things slowed down to a grind with the Skaven rallying particularly Barrys' shooting with his catapult with not one shot missing (found out Barry that your shooting should have scattered with indirect fire even though you roll a hit).


Also his Plague Furnance (big nasty tower thing with smelly gas stuff) caused a bottle neck so even though all the accompanying monks were slain pretty quickly a unit of knights and a unit of swordsmen picked away at the tower and its accompanying nasty rat and continued to loose casualties each round. Especially annoying is that the 8th Ed rules don't allow a wrap round rule so I had a huge unit of swords men engaged but only a three wide section could attack which I thought was a bit lame, (but I suppose I'm biased).
In the end when time beat us the Skaven and their nasty suprises (especially exploding Slaves when they get beaten in combat!) managed to tip the scales in their favour and Barry got the victory.

Interesting game and full of surprises but fairly even until the end which always makes for a more enjoyable game.
Posted by Hendrid at 10:20 No comments:

King of the Battlefield

Last week was a bit of a change of pace from the usual with myself, Dave K, Dave B and Doug trying out a set of 'quick-play' rules for the Seven Years War called 'King of the Battlefield'. New rules to me but apparently are popular about the clubs so it was thought to give them a go.


With protanganists on both sides being provided by Doug the set up was fairly impressive and looked the part especially considering it was a quick 'lay down' game. With everyone new to the rules, the game was merely a trial of the rules and to see how they worked out.


The mechanisms were certainly a bit strange at first with the simple idea of you shoot and your opponent throws dice took a bit of getting used to and the idea of cavalry melee being ongoing in each turn until the two sides run out of troops or choose to not feed more troops in was also a bit on the different side.
At the end of the night with the Austrian centre collapsing and the Prussian left flank looking open and the right anybodies match, the game was still in the balance. It has been a long time since I played the SYW period and it was good to have a bash after so long, so thanks to Doug for setting the evening up.


All in all I enjoyed the game and once the rules were picked up they did play 'quickly' and certainly gave the feel of the period. Will need another couple of plays to confirm one way or another if this is a goer in the long term but on first play, opinions were pretty favourable. Worth checking out 'King of the Battlefield'.


In a different direction a welcome to a couple of new visitors is over due; Kingsleypark, rousell68 and Foss1066 with much wargames goodness available from all three.
Posted by Hendrid at 21:54 No comments:

Email ThisBlogThis!Share to TwitterShare to FacebookShare to Pinterest
Labels: SYW

Once more we have ventured out of the northern wilds and headed over the old drove roads down through Lennox and down to the 'toon a Glascu' to the Wappinshaw.
A new venue in the Concert Hall rather than the old hall next the Polish Verterans club, which although having a certain period charm was a bit lacking in the electrical illuminance department, which could not be said for the hall now. (Although the yellow lighting above the traders was a bit strange on the colour rendition of some traders stock.
Arrived a bit later than I would have wished and so missed the rush and the best of the bring-and-buy but still worth the treck down to the auld toon and have a chat with folks you only see at the various shows.
A good show, if still quite small but a step in the right direction for the future. I would like to see it get bigger (and I'm led to believe there is room to expand upstairs) but better to do these things in small increments. Didn't pick up anything at the show but did do the usual tour round the city centre and some old haunts after the show since I'm here; Cafe Gandolfi, the Horseshoe Bar, Static Games, Jamiesons, The Dragon and the George and so on and then sauntered off into the sunset.
Now some photo's of what was on offer at this years bash; 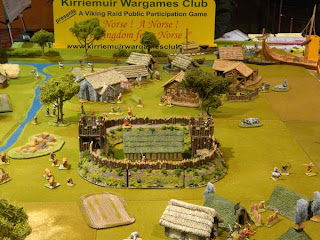 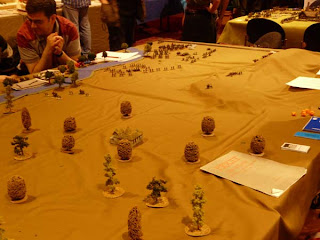 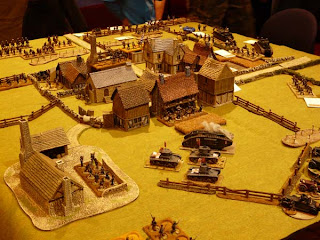 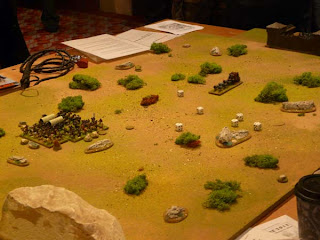 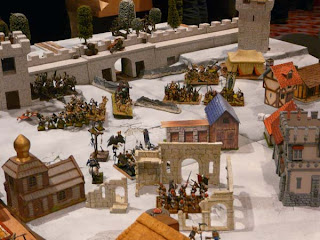 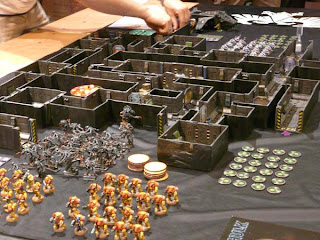 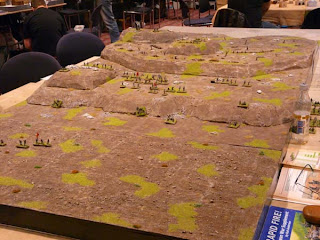 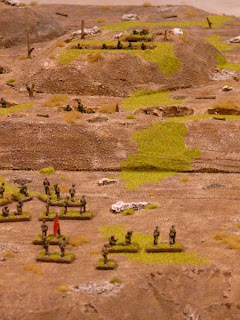 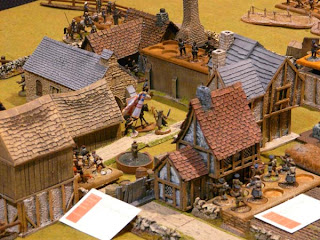 This week at the club I was allowed to sit in on a game of FOG Renaissance. I had dabbled with FOG when first released and I must say I wasn't impressed. Now with the Renaissance version out and several people extolling it's virtues I had decided to give it a go. Dougie and John kindly allowed me to sit in on their game with me being the Roumelian Pasha on the Left flank of Dougies' Ottomans versus Johns TYW French.
I enjoyed the game and learned a great deal about the mechanics of play. The armies proved to be a bit uneven in capabilities with the technological gap being very evident, not aided by my poor deployment of the Ottoman Cavalry, but still an enjoyable outing.
I think that FOG, much like DBA and DBM and to a lesser extent the various WRGs and other rules of their ilk work and work well, but only if you keep to the historical pair-ups or at least in the same technological time frames. Probably true of most rule sets including WAB and Crusader and we'll see with the new plethora of ancient rules like CoE, WoC and other TLA's.
Posted by Hendrid at 22:26 No comments: