A catch up post for the first round of the club Necromunda Campaign just kicking off a couple of weeks ago (well OK, a month ago, but who's counting).

With a total of twelve participants signed up for the campaign this one is going to be busy and hopefully full of action and entertainment.

The first round with 6 turning up for the first bash we went for four on one table and two on another and we started off things with Andy's vertically challenged Van Saar, Dave Goliath's, Ken's House Cawdor and my own Red Redemption on the first table and Kev's Cawdor versus John's Eldar on the other table after the usual random deployment throws.


The randomly determined starting points meant I was starting in the open facing up to the Van Saar who with 'Tunnels & Vents' skills meant they could forward deploy pretty much where they wanted. And they did.

The Goliath's mob handed faced up to the Cawdor fanatic's who outnumbered took to cover while the Goliath guys advanced pretty much in line order while pouring lead into the enemy while advancing.

Starting the fight in the open was not a good idea for the Redemption crew especially as the Van Saar already had snipers in good positions right from the start, so the Redemption rushed towards cover and immediately came within range of the most forward deployed Van Saar, but they ket loose with Autogun fire and flamers and themporarily downed a couple as they ducked for cover. 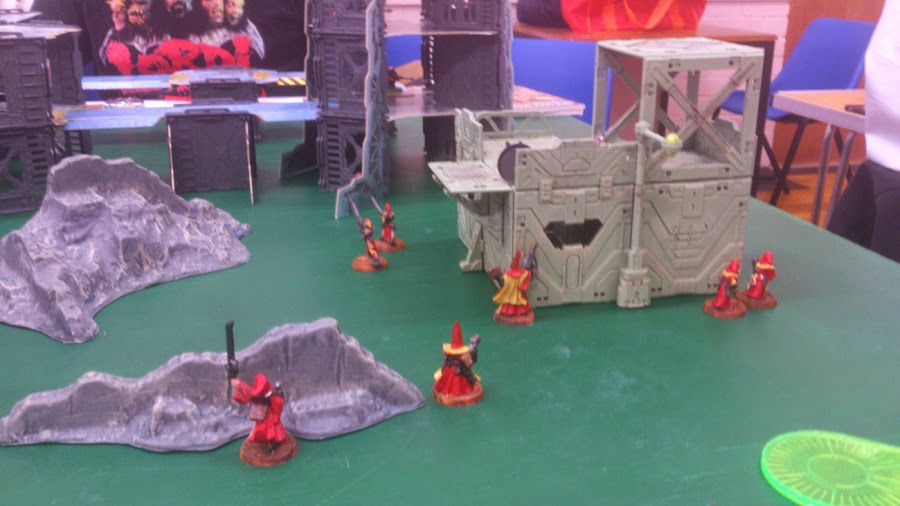 In return the Redemption took some fire but no permanant loses. Next round and pretty much every one had targets but the leading Zealot got mashed by the Van Saar leader before she could even swing her Eviscerator. Returning the favour, the Redemptionists took out the Van Saar leader in a blast from the Priests meltagun and another wave of flamers.

Next up the Van Saar dropped the other Zealot and with one of the Crusader Brethren temporarily dropped a Break test was required and this of of course failed in excellent style and the Redemptionists fled the scene. Though having caused some minor wounds on the Van Saar. 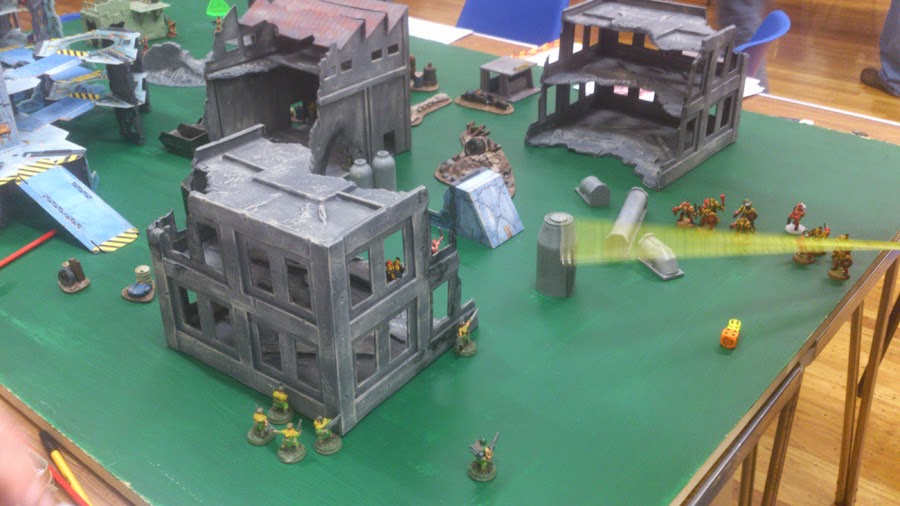 On the other side of the field the Goliath's advancing seemed to go pretty well much to everyone's surprise and even with the Cawdor Crag Rats doing lots of climbing and sniping and much sneakiness they went down pretty quickly to the Goliath might (though not as quickly as the Redemptionists) and the Goliath's turned and headed en-masse towards the Van Saar who were equally advancing across the gang ways though they used cover on the way.


The clash when it came was short lived and the shear numbers of the Goliath's worked in their favour and it wasn't long before the Van Saar had to make their break test and legged it too, leaving the Goliath's the victors of this Gang Fight.

Over on the other table Kev's Cawdor had a very difficult time of it against the might of the fully equiped Eldar but he made a bold stand against them ducking and diving in cover but with only his leader really able to do any damage against the Xenos tide, the game was only going to end one way. 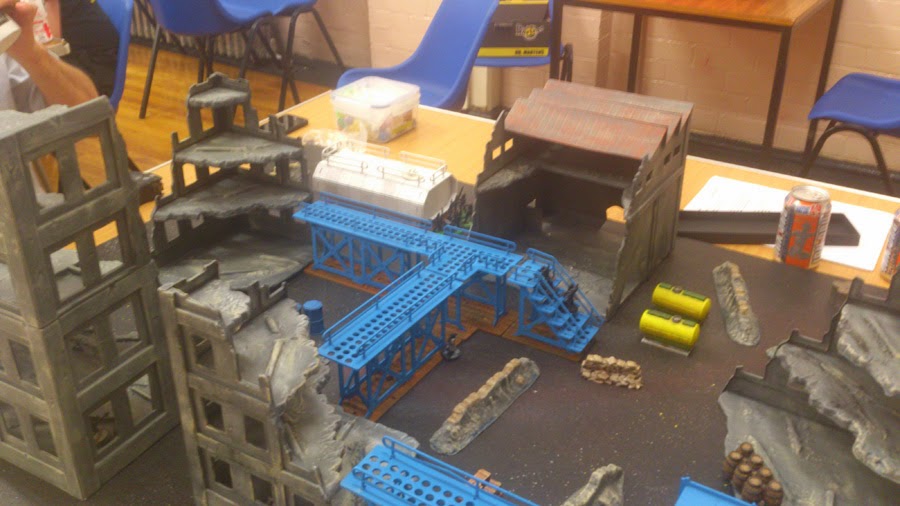 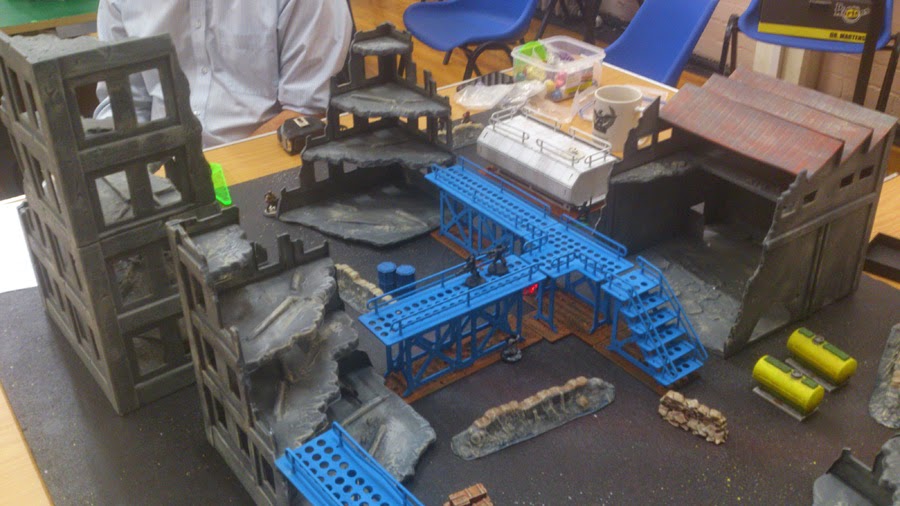 And end one way it did though they managed to last longer against the Eldar than the others did against the Goliath's so John's Eldar didn't have it all their own way.

A good start to the new Necromunda Campaign which will involve 10 main rounds with interspersed fill in one-on-one games in between so a maximun 19 games each before the Big Finale next year.

Next week, is my Round 2 game with Doug, Kev and Andy with a Scavenger scenario picked from the campaign ladder by the winner of the Round 1 Dave and his Goliath's. This should hopefully be reported quicker than Round 1.
Posted by Hendrid at 15:35 2 comments:

In Her Majesty's Name Skirmish Rules 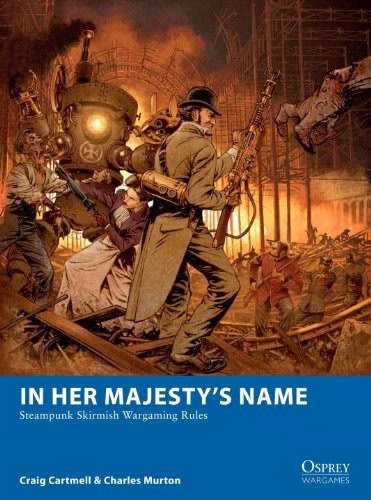 'In Her Majesty's Name' is another of the rule sets from the Osprey Wargame stable.

As a Steampunk skirmish set of rules, they did not immediately catch much of my attention, not because there is anything untoward about Steampunk or skirmish or the combination of the two but as the Steampunk genre has not been a part of my previous gaming activities, they just appeared on the radar as a blip and a nod towards the Foundry miniatures which were released at the time as the rules did, nothing more.

However, from their release a few months ago now, several members of my gaming circle had picked these up and raved about the possibilities that these rules offered which were much more than their cover title suggested. So they were duly picked to see what they actually had to offer.

The layout of the rules follows the current Osprey rules format including the cover layout, type face and numbered sections within the rules. The difference these rules has with some of the other titles in the series and the FoG titles is that there are none of the ubiquitous illustrations from the Ospreys back catalogue of historical titles, really for obvious reasons. There are however, a good number of characterful photo's of miniatures looking suitably rakish or dapper depending of which side of the great divide they fall into (supplied by the gaming worlds great and worthy, so suitable eye candy here), plus a number of quite nice illustrations by Mr Fab and Jesse McGibney both of whom capture the spirit of the rules quite nicely.

The body of the rules follows the usual layout of Introduction, Troop Classifications, Playing the Game, Setting up a game, and a couple of sections on weapons, machinery and powers which make up the rules as a whole and covers just short of half the 64 pages of the rules.

The next couple of sections cover a points system, and making up a sample 'company', then followed by a reasonable selection of scenario idea's, then a selection of possible scenario locations for idea's, and finally there is a short section on campaign's.The last couple of pages have the now required 'Quick Reference Sheet'.

The rule book is nice to flick through and as with all the Osprey sets, all the tables are clearly laid out and most bits are easy enough to find once you get the idea of play in mind, but my usual cry of 'Why no index?' once again rattles around the Warblogosphere.

The mechanics of the rules are reasonably simple but hold enough depth so that there's something to get your teeth into. With company members having a set of stats; Pluck, Shooting Value, Fighting Value and Speed and then what equipment they carry.

The rules are based around D10's, which I quite like as a whole, and success or failure of an action is based on a D10 roll plus the appropriate stat value modifer plus any variables. All pretty easy and familiar.

The real strength of these rules are really on the fact that they are set up as being a bit old school in that they are open ended and laid out as pushing the player to do with the rules what they may. They have given several starting idea's for companies so you get the picture but as the author's are obviously 'into' the genre, they encourage the player's to go with what their own inspiration is for gaming, not the authors idea of what they should do.

I can see why several of the guys at my club are enthusiastic about these rules. They play through well in terms of the basic mechanics of the rules but as a rule set themselves, add something to the mix that other rule sets don't; that being enough of Steampunk flavour to get you salivating so you want to make up the main course yourself, and a well thought out milieu and image that gets you hooked.

A nice set of rules all in all, and one which can easily be used for a multitude of settings and tastes. Roll on Space 1888 and 'Up the Khyber'.

These get an Excellent Warblog rating of 8 out of 10.