The latest in the ongoing saga that is our Third Season Mordheim Campaign rolled around earlier last week, with all the antagonists lined up to have a bash at the Witch's Coven who had been tracked down to their lair at the head of a wooded valley somewhere deep within the Drakwald Forest and nearing the final destination of Slayer's End.


The usual suspects were present, clockwise round the table; Kev and his newbie Vampire led Undead, Andy L and his now robust Witch Hunters, Ian and his trudging Dwarves, my less than dangerous Protectorate of Sigmar, Dave's much depleted Marienburg Mercenaries and Any W's Skaven horde, with the remnants of the Witch's Coven at the head of the table with their backs to the wall as it were.


As a novelty, I kicked off the proceedings and started a beeline rush towards the Witches, trying to keep to cover and avoid as much shooting from the Merc's and Dwarves as possible. The Merc's moved round the the back of the Protectorate and managed to stun the newbie Protectorate Archer.


The Skaven in their turn rush out the starting box in a pell-mell dash to close with the Witches and Warlocks as quickly as possible.


The Coven move out of their corner and start to try to escape the clutches of the bands, little or no spells are fired off due to intervening forestry so far.

The Undead advance cautiously, and in formation (causing much hilarity among the participants for copying the Marienburger tactics), towards the advancing Coven members and the Witch Hunters in turn move round to the rear of the Undead, intent on mischief. The Dwarves begin their trudge to they and keep up with proceedings.


The Protectorate continued their move through the woods trying to avoid intermittent fire from several directions, the previously downed Archer eventually falling foul of the continued attention of several enemy bowmen.


The Merc's continued their cautious advance, circling round to the rear of the Protectorate while the Skaven rushed towards the Escaping Witches and the Undead cautiously advance while watching their back with the Witch Hunters slowly closing and the Dwarves continuing their trudge to catch anyone.


The Skaven charge when it came was devastating and Andy managed to clear almost the entirety of the Witches crew in one round due to, at least in part to a jaw dropping amount of critical's. The Witches only getting a couple of paltry spells off before disappearing before the furry tide. A couple of the Witches broke off along with a couple of Warg's charging the Undead and were felled after a brief tussle with the Vampire Crew, holding them up long enough for the Witch Hunter's to catch up after having a couple of turn's delay trying to get rid of a blocking Zombie. 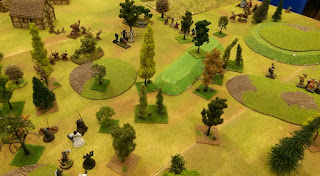 Only one Warlock managed to slip past the Skaven horde (by diligent and successful use of a repeated flight spell) and made for broke rushing to hopeful freedom between the Protectorate and the Dwarves.


The Undead make short work of the couple of Warg's and Witches and are forced to turn to face the encroaching WH's and a melee ensue's with the Undead shooting proving to not be up to it's usual standard.

The Protectorate charge into the rear guard of the Skaven but after dropping a couple of giant rats, The Skaven counter charge and Andy continues his dice rolling success and drop three of the Protectorate in reply. With 50% of their number down quickly, the Protectorate leg it to avoid further losses.


With the Witch Hunter's closing fast, Kev's Undead moved into contact with the advancing Skaven, and with the use of the Cane of Alluminas (negating the fear affect of the Undead to it's holder and those around him) the Skaven charged in with the Rat Ogre and and several of the Rat heavy hitters and dropped several of the Undead with Andy W's ongoing dice bonanza continuing unabated.

Kev deciding that nothing was to be gained by hanging about legged it with his Undead leaving the Witch Hunter's and the struggling on Dwarves to move towards the up till now victorious Skaven horde.


The Marienburger's now emerged from the woods and fired off a few shot's towards the Skaven rear.

The Skaven in their turn make short work of the Merc's vanguard and Dave retires the Marienburgers to avoid losses once again.


The Witch Hunter's with little to lose, advanced towards the Skaven while the Dwarves near to on coming battle, with the Dwarves and Witch Hunters mutually agreeing a non-agression pact in the face of the Skaven types to deal with.

The Skaven charge on the Witch Hunter's was telling but the WH's managed to weather the storm and pass a break test easily and their response to the charge was effective and manged to take down three or four of their number (mainly Rats).

The Dwarves moved into contact (just) and their hireling Pit Fighter charging in and the Dwarf Sharpshooter from afar (very afar) adding to the Skaven woes forcing a break test. With the low Skaven Leadership to blame, the Skaven fled the field.


With the Witch Hunters then agreeing to voluntarily rout to avoid nastiness with the Dwarves, the Dwarves once again gain another victory (mainly by not getting into battle in time).

With the Witches now largely out the way and Ian deciding to not have a raid on one of his neighbouring warbands, the action next time moves to the penultimate scenario and the assault on the outer defences of  the Necromancer's new lair at 'Slayer's End'.
Posted by Hendrid at 14:35 3 comments: