This weeks club match was my first trial in anger of the new Middle Earth SBG rules from GW. Playing against Kevin with him supplying the forces as usual in the form of Theoden and his Riders pitted against the vile Lurtz and his gang of Uruh-Hai thugs. I of course chose to play Lurtz's force.

Early shooting worked well for the Uruk-Hai and 2 or three Rohan unhorsed and three or more Royal Guard are shot in the first couple of rounds, the Uruk-Hai hero claiming a couple on his own.


Kev goes for the charge and a line develops across the field but this limits shooting so everyone pretty much piles in.


The mid game goes by with priority shifting and a couple of heroic charges declared and countered. Rohan gets the hits but the Uruk-Hai get the kills. Rohan failing to close the gap in numbers that they need to. 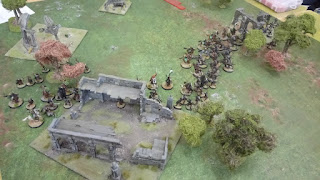 In the closing rounds Kev got a couple of better rounds and scored a decent number of kills but the Uruk;Hai continued to eat away steadily at the Rohan force.


In the end the Rohan centre disintegrated and the melee seperated into two fights around the ruins and the two Rohan main hero's with Rohan doing slightly better on the left and clearing the far side of the ruins but the Uruk-Hai doing the same between the ruins.


Even though the Rohan force is broken it doesn't lose many to rout due to good courage and buffs but continue to lose to the Uruk-Hai attrition. With the Uruk-Hai looking to have already won and still unbroken things look grim but it's still not all one side.

The end nears and playing through the final round to see how things pan out Kev manages to take out a couple of the general Uruk and Theodred cuts down Sharku and thus gets the Uruk-Hai below break point and despite overwhelming numbers Theodred miraculously survives the final round.

The other side however Theoden and the Rohan Captain are cut down by Lurtz and Ugluk and the massing Uruk-Hai.

In the end we totaled up the victory points and the death of Theoden proved to be the clincher with a narrow 6 to 5 victory going to the Uruk-Hai but with the Rohan force scattered and only 8 left on the board and the Uruk-Hai broken but with 17 or so left fighting. Rohan closing the gap near the end but not enough to tip things

Very enjoyable game all in all. Kev felt it to be a bit one sided and Rohan getting beaten up due to his inability to get the kills despite hitting lots. I felt the game was pretty even but the numbers on the Uruk-hai side giving the edge and limiting the Rohan Cavalry charge advantage.

Definitely up for another rematch on the matched play or give a scenario a try.

The rules were all pretty familiar with really only the changes to the hero rules to pick up on. Certainly seem to be reasonable and will be up for more trials soon.
Posted by Hendrid at 21:31 1 comment: 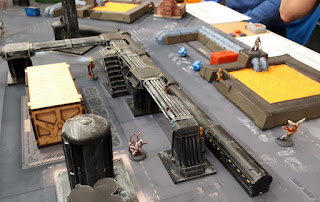 This week I was mostly playing Rogue Stars.


Several bods at t'club got together for a RS fest organised by Andy W and I joined in to give the rules a try as I'd not managed to attend previous gatherings. 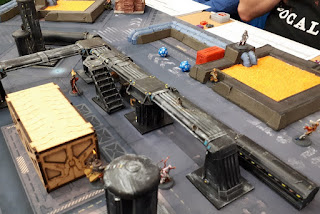 Six of us teamed up in pairs and rolled up random scenarios for a pre-set Crew as supplied by Andy with myself picking up an Inquisitor based Crew against Andy's Cultists which proved to be an interesting pair up. The scenario we rolled being the Rescue with one of my crew being the captive to be rescued.


The game worked out to be a very evenly matched pair up with both sides giving each other a bloody nose. Initially things tended to go to the Cultists way while the Inquisition was a man down, but try as he might Andy failed to capitalise on the advantage by taking anyone out but repeatedly wounding the Servitor Cherub to the extreme and the Crusader ended the game with over 9 pins but only 1 wound but both refusing to get killed but the Inquisitor did go down mid game to an uncharacteristic good wound dice throw from Andy. 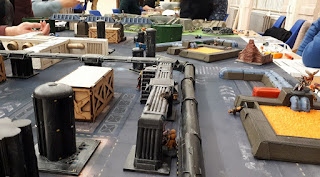 In the end the Cherub freed the Medic from the clutches of the Cult and she made a bee line for escape but taking out a Cultist with a Mind Bolt before getting tangled up but repeated knock downs.

In the end, the the honour's were pretty even with three down each side but a narrow points victory to the Inquisition.

Thoroughly enjoyed the game and I believe the others enjoyed their games too. Interesting game mechanics but with a fair bit of variety available in the seemingly light rules. Definitely get another outing with Rogue Stars soon.