Sisters do it Digitally

I note from the GW and Black Library Websites that they are soon to release (19th Oct) the new Codex: Adepta Sororitas (Sisters of Battle to you and me) for 40K.


Being a collector of this army for sometime (I've even had a couple of games with the army over the years too), I had a look at this as it peeked my interest, not only as I have a passing interest in using the army again but also cause the released 5th Ed lists serialized in White Dwarf a couple of years ago were fairly poor, so I thought this might be an improvement.

I quickly noted that this was an ebook only release. So digital but no dead tree versions, hmmm. 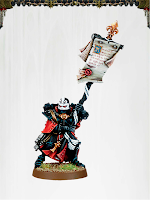 I don't have a big problem with this as I've recently embraced the ebook revolution, but what is of interest was that this is synonymous of a bigger move, away from hard copy to a digital only theme that seems to be building generally in publishing and more particularly in gaming. Perhaps it is because of the general low volume of gaming publishing that is pushing this move, or is it that us as customers are more agreeable to the digital medium.

I can see that the army is probably low sales comparatively, but at least the lower overhead option of supporting the still available (but alas un-added to) range of figures.

The pretty chunky price tag for a digital version of £19.99, for a 120 pages ish did seem a bit steep though.

I did note that GW's (Black Library) catalogue of digital and digital only products is pretty extensive, surprisingly so. Even if some of the titles are a bit esoteric to say the least, but I'm not one to gain say that.

I'll no doubt pick it up sometime probably at the same time I get around to getting the new Eldar Codex along with the Iyanden Sourcebook. Ouch, no change from £60 for some intangibles.

Not having been able to get to the club for a fair while I was hankering to get a game in and when Dave Imrie (Saxon Dog fame) approached the powers that be at t'club to see if there was any interest in bodies playtesting the Hollow Crown rules, a fair number expressed an interest, myself included so a perfect excuse (as if one was really needed) had presented itself.

So last night was the duly appointed night of battle and Dave, Jack and Ian Hale (the progenitor of the rule set) brought themselves along to FDWC and kindly put on an a very interesting game with Jack and Dave bringing a grand pile of their rather tidy looking troops to do battle with.

So Dave K, Kev and Craig on one side taking a battle each on the 'Rebel' side and myself, Andy and Alan taking the 'Right' side each taking a command and with suitable traits in hand did battle using the rules 'Hollow Crown' which are still a work in progress but rapidly developing going by what we saw last night.

Dave had parcelled up the troops as a mixture of Scots and English troops on both sides so as not to cause any bickering (you know what wargamers are like with that sort of thing, but more importantly so each side got to see the abilities of all the troop types

All in all the game was a roaring success for all combatants with our respective combats and shooting etc being over looked by Jack and Dave and Ian making sure all was circumspect and above board.

The game though for all intents and purposes was split into three with the respective battles pairing fairly naturally, things did get a bit entangled as you would hope with any medieval battle, but in summary the game went my troops on our left stood and shot at anything that moved and hoped to soften up the enemy enough to withstand the inevitable crash of two schiltron's, Kev managed to skillfully blunt the worst of this with only one of the schiltron's being pretty messed up, but loosing his supporting Scots bowmen and skirmishers before his larger of the two blocks crashing into my line and making a big hole.

In the centre, our 'glorious leader' being a bit rash, launched his bowmen, Men at Arms and Bill at the enemy line who in return did what I was doing and stood and shot them to shrebbins as they advanced and then launched his schiltron at the Men at Arms once they had been stripped of their supporting troops, only to be counter charged by the centre's secret weapon, a sizable unit of Islesmen who tipped the combat which raged for a couple turns before turning the tide.

Though by this time what was left of Andy's very exposed Bill had been all but disintegrated in front of Dave's largely intact command.

Over on our right, Alan struggled to get his schiltron's across the battlefield due to some very obstreperous woodland which slowed him down and were only just coming to blows with Craig and Alan's forces with the pretty much intact line's on both sides crashing into each other in what looked like to be a bloodbath for both sides.

With time beating us but things really looking not to good all in all for the 'Right' side, we called a halt and tidied up and discussed the fore going and had a general chat.

Great fun was had by all and Dave and the crew picking some constructive critique and noting a few new situations and with notes suitable taken, all happy all round. Looking forward to another game or three, just to test the rules of course.

Thanks To Dave, Jack and Ian for putting up with us and putting on a very enjoyable game and letting us play with the very nice troops (you can head over to Dave's place Saxon Dog for some much better pictures of his troops in all their glory, I don't know if Jack has a similar laudable blog to see his fine troops I'm afraid) and I look forward to see the rules progress. 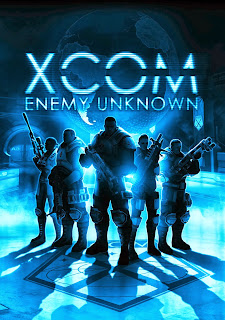 I have just picked up the other day the Computer Game XCOM Enemy Unknown. This game has been out for some months now and has received glowing reports generally and I'd been looking to pick it up at some point as I was a fan of the original game of the same name and it's subsequent sequels; XCOM: Terror of the Deep and XCOM: Apocalypse.

With the imminent release of the add on to the current game, XCOM: Enemy Within, Steam had an offer on for the main game with 75% off so it was an idea time to get around to picking it up. And I'm glad I did, it's a great update to the original.

They have kept to basic premise of the game, Earth attacked by insidious alien intelligence with an unknown agenda and you play the pert of a multi national elite force known the XCOM project who are there to find out about the aliens and repell their assault on Earth. The basic gameplay revolves around some resource management but this is pretty basic in terms of funding from the various 'council' members and the corpses and materials that you get from missions which are then used to build facilities and equipment and research new technologies, and the aforementioned missions which are the real thrust of the game play, with squads of troops with varying skills which you can enhance as the squad members gain experience.

In many ways, the actual game play and the choices you have through out the game have been simplified and the mechanisms for going through the game are also much simpler from the original but the actual look and feel of the game is much enhanced and slickers (as you would expect) and in fact in many ways positively cinematic with all the battlefield action nicely animated and annotated.

All the elements of the original series are still there with only a couple of additions with the main add being a running 'plot' through the game as you progress picking up on the progress of the war and adding a few specific missions over and above the standard recovery or abduction missions.

The names of the equipment types have been kept; Skyranger transport vehicle and Interceptors and the enemy troop types; Sectoids, Floaters, Mutons etc are all still there too. 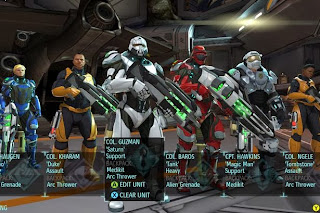 A bit of colour is the ability to customise your squad members.

Although this has no effect on game play you can get some nice looks to your troops with various skins for facial types, nationallity, armour, headgear and so on.

Along with the add of the different troop type development trees which lock in on each trooper once they get passed the rank of Rookie and they can progress as Assault, Support, Sniper and Heavy with a limited choice in skills as they progress on their paticular development tree, you can get a fairly pleasing variety of troops. 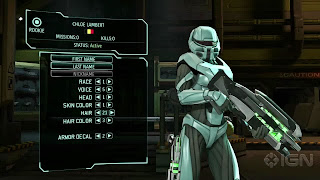 Once you have a squad and a mission comes along, you are launched on to the tactical gameplay where the main action of the game is.

In a fair variety of terrain types and looks (I've even had a couple of missions set in Glasgow!) with the addition of lighting varieties the action is interesting and thought provoking being three dimensional. 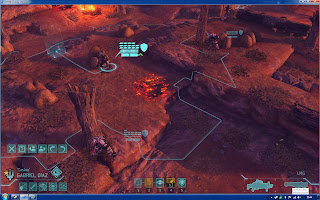 With a familiar IGOUGO based system with the Overwatch and reaction facilities to interrupt the oppositions movement/action the whole combat sequence can be very entertaining with the required tactics being similar to real squad tactics of move and cover and mutual support.

Rush moves where you run to cover are usually nicely cinematically animated and the score of the action usually adds to the drama too.

All in all the game is as I said, a good update to the original franchise and though there are a few minor quibbles (like where there is a choice in mission, you can only choose one and can't go back to pick up the others like you could in the original, and you've only one base rather than several to manage which I liked in the original) I wholeheartedly recommend the game to anyone interested in this genre, especially when it's available for download at £8. 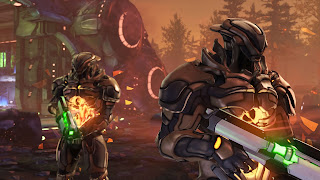