Just recently heard of the passing of Frederick Pohl who died at the beginning of this month.


One of the giants and Founding Fathers of Science Fiction and was in on the ground floor of sci-fi and worked as a prolific writer and editor from the 30's right into the 90's writing some of the early sci-fi classic's and mentored many of the now great SF writers both during his tenure at Astonishing Stories and as a writer collaborating with many including Lestor Del Ray, L Sprague de Camp and Arthur C Clark.


Much of his work, though based in a sci-fi context, was firmly dealing with issues of the contemporary world form consumerism to over complexity and built-in obsolescence in manufacturing and beyond.

The man and his work will be missed by many.
Posted by Hendrid at 21:53 No comments:

This, the third Riddick movie in the series, (not counting the animation ones) is sticking with the whole Riddiverse thing and Vin Diesel continues to make this role very much his own.

I thought Pitch Black, the first of the series was pretty good, and thought The Chronicles of Riddick was exceedingly good, but with the the first being released back in 2000, and The Chronicles in 2004 time marches on and nine years has made a difference to Mr Diesel but he still pulls off the part with aplomb.

David Twohy, Director and writer of the three movies, has returned to the story line of Pitch Black to get the main plot hook and indeed the whole movie 'feel' with the story line having a great deal in common with that movie. 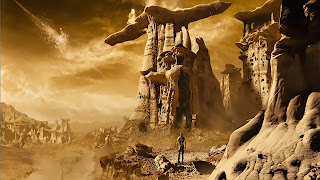 The start of the story, picking up from where The Chronicles left off was I felt, a bit weak but sets up the rest of the film adequately and the ret is pretty much what you expect and probaly came to the cinema to see, Riddick being Riddick and killing things along with a fair bit of eye-candy CGI and I did like the whole look of the planet even though it was more 'ruling the sepia', than 'ruling the dark'.

With a reasonable amount of expected violence but nothing too graphic, a decent amount of hardware and a fair number of 'well kent faces' plus the ubiquitous horde of oncoming scary monsters the film does deliver a couple of mild twists.


I won't repeat the whole story line but enough to say that the movie does what it says on the tin but doesn't set the heather a light with a novel story line but I did enjoy the film a great deal and would recommend it to anyone into the genre.

The movie gets a solid 8 out of 10 from the Warblog,

I don't know if there will be another in the series, but again the plot does leave a few things open though I suspect these items are more of interest to the Riddick Fan than being explored in a cinematic/box office sense. I hope the series continues as I do think the whole Riddick thing still has some legs but if you had to wait another nine years, Mr Diesel I think would rightly decline the favour. 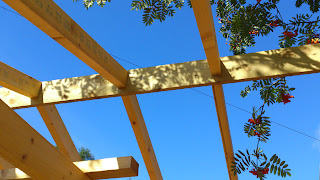 My usual hobby past-times have been taking a back seat recently with gaming and painting being pretty sparse of late, but just for a change I'm quite happy about this state of affairs as I have at last got around to building a 'Man Cave', and this has been taking up most, if not all my free time over the last couple of weeks or so.

So I've swapped my craft knife and size 00 paint brush for a stanley knife and a compound mitre saw and have been doing a bit of carpentry instead. 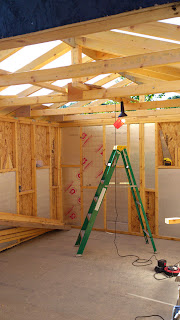 Quite enjoying the whole construction thing and with a bit of progress now being made with the build now water tight and lock fast, I can slow down a bit and get the fit-out under way soon.

I'm now close enough to seeing the fruits of my labour's to be planning games and painting stations and all sorts of good stuff that I can now do with a bit of elbow room to spare that the whole project looking worth while. I'll be doing other stuff no doubt in the new cave but with enough room for 8' x 4' plus storage etc etc the activities planned will involve a game or two.

Still a couple of weeks away from getting whole thing habitable and a couple more to get it fitted out it'll be no time at all before it's under sail. Looking forward to it.