I have been doing a fair bit of reading up on the Garde Ecossaise while pondering on the colour scheme to paint up my unit of Garde on foot and out of general interest.

Being always with the person of the king, they were party to all the events of French royal history for the best part of three hundred years. They are described thus; 'The Garde Ecossaise enjoys, preferable to all those that ever did service in France, place and precedence. For example, the captain of the Scots Guards is, by way of excellency, designed first captain of his Majesty's guards. He begins to attend on the first day of the year, and serves the first quarter.....When the king is crowned or anointed the captain of the Scots Guards stands by him, and when the ceremony is performed takes the royal robe as his due. When the keys of a town or fortress are delivered up to the king he returns them that minute to the captain of the Scots Guards. Twenty Five of his guard (Garde de la Manche) wear always, in testimony of their unspotted fidelity, white coats overlaid with silver lace; and six of these, in turns, stand next the kings person at all times and seasons in the palace, the church, in parliament, the courts of justice, and the reception of foreign ambassadors. It is the right of these gentlemen to carry the corpse of the deceased king to the royal sepulchre at St Denis.'

The foregoing does present a few interesting ideas for diorama's or vignette's, but they will be for another day. 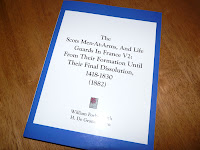 I've managed to track down a rare copy of Forbes-Leiths 'The Scots Men-at-arms, and Life Guards in France V2, but I'm still on the scrounge for volume 1, but so far a copy is eluding me, mainly due to cost of the ones I've tracked down so far. 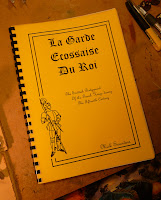 I did track down a copy of 'La Garde Ecossaise Du Roi' by Nick Saunders, which though briefer than the Forbes-Leith work, is very useful though more directly aimed at the Garde of Charles VII.

Both works are a wealth of useful information and to the end that I have pretty much decided on the colour scheme for the Garde for Charles VIII of 1495 under the captaincy of Sir Bernard Stewart and Patrick MacLean hommes d'armes. with beneath them, 25 Archiers du Corps and 78 Archiers de la Garde.

I did manage to confirm that from the Gardes inception they consisted of archers and crannequiniers. It would appear that the term archer does not necessarily mean someone armed with a bow though often assumed, but more towards the later use of a cavalryman lighter armed than a gendarme (the term archer often being used at the time for anyone being a member of a man-at-arms retinue or a person of notes guard), though again there is some evidence for the unit being armed with longbows (along with other garde units) at certain events. It may be that they were armed with either depending on the choice of their captain (or king) at the time.or possibly the bow was used on ceremonial occasions. According to the muster roles, the term crannequiniers disappears and appears repeatedly but after circa 1464 it disappears altogether, though it is confirmed that Garde units were armed with crossbow at Fornovo in 1495. The Garde consisted of generally around a hundred who were men of rank and substance and then the 'rank and file' made up the rest of the company as a lance being made up of a MaA plus a squire, archer, valet, and a crannequinier. Like the Cent Suisse numbered more than a hundred, it is likely that the total muster for each of the Garde du Roi on campaign would be four or more their apparent number.

It is these others, that may have been armed with crossbow or bow by this time and the Garde proper would have been armed as other gendarme and archers of the French army while on campaign. In brief, pretty much anything goes that suits your chosen look as nothing can be definitely proven or not as arms used.

Firstly, the Captain would wear red, so that's pretty simple, and with Messire Stewart away on kings business a lot of the time that will be Messire MacLean.

Although not certain, the standard bearer will be wearing a white surcoat with the badge of St Michael, Charles VIII being the only French Monarch of the time not having an identified 'badge' I figured the artistic licence being acceptable and used on his reformed ordonnance standards including the Garde, I figured that it would suffice. The standard bearer is currently shaping up as we speak being the test piece for the unit.

Now according to the only sources I can find stating anything about the Garde livery under Charles VIII, which is mainly Ian Heath, they also wore the green, white and red of their predessors, so I'm going to go with that scheme rather than the white I'd planned on before, being confirmed for Francis I reign. At least this is going to make the unit a bit more recognisable as being what they are.

The question of the badge however does pose questions as above and I have decided on the St Michael motif for the unit as a whole. This was popular with several of the medieval French kings, was on the livery of the Garde under the reign of Louis XI, the order of St Michael being founded by Charles VIII and several of the Garde were members of that order.

The unit paint scheme is now sorted and under way and I will post the progress as I go with the standard bearer likely to be the first with any progress.


More on the Garde Ecossaise soon.