All Along the Watchtower

This weeks club game was the first (hopefully of many) of the new WHFB campaign that the club is running.
The game being the Watchtower scenario from the rule book, pitting my doughty Empire hero's, being ably assisted by Dave K (who has been drawn to the dark side of Fantasy gaming) against Kevs' wicked and cowardly Dark Elves in a spritely 1500pt game.
Things started off pretty poorly for the Empire, with the Dark Elves starting play as I was defending the watchtower the Dark Riders advanced, shot my Pistoliers to bits who (quite rightly fled) and my Light Cavalry was shot up by the dastardly Shades skulking in the village and a horde of crossbow bolts even took out a couple of crossbowmen, although the Witches charge to the tower wasn't very enthusiastic and they ended up advancing two inches on a failed charge.
Round two and three went pretty badly two with the destruction of the unit of Halberdiers in the tower in one round all to a whopping 22 casualties dished out by the Witches when they did manage to reach the tower, my Pistoliers and Light Cavalry being out shot by the Shades and destroyed, my Swordsmen with wizard being run down by the Corsairs and one unit of Knights failing to make a dent on the crossbows and being cut down to a man.
Honour was however satisfied by the general Baron Sidle and his Knights who saw off the Dark Riders and then returned to destroy the Corsairs and the enemy general, and the Crossbows managed to do what the mighty Knights failed to do and caused the DE Crossbows with their attendant harridan to flee for their lives in Round four.
At the end of Round Four with nothing the Empire could do to dislodge the Witches from the Watchtower with only the General, BSB and Preceptor and a unit of Crossbows and a unit of Handgunners, the brave survivors decided to live to fight another day and grudgingly allowed the dark ones to retain the tower, for the moment....
Good if pretty brutal game with really only the General and his attendant Knights getting any glory from an otherwise poor showing, and again the changes to the Warhammer rules coming to the fore with the Dark Elves putting down a pretty devistating amount of fire power and followed by an equal amount of attacks in close combat, definitely an improvement for them since the last edition. Again I like the changes to the rules and, with admittedly only a couple of games so far, like the feel much more than the last edition, much more fun games.


The next steps in the campaign will see the Baron pitting his troops against his old adversary in the form of the Ogres and then again against the Dark Elves once again but in the Dawn Raid scenario, at a disadvantage having lost the first round. A part of the next step will be to get some troops painted.
Posted by Hendrid at 21:21 No comments:

This weeks club game was a return to Warhammer Fantasy after at least a year.


With the release of the 8th Edition late last year, there has been quite an upsurge of people returning to the game, certainly going by what I've read on the Interweb, and our club is no different. With an up and coming club campaign in the offing I thought it a good idea to get my hand in and try the new rules.
Ian offered to give me a game against his Ogres. I've not got a good track record against this army being 1 - 3 but you never know I thought, maybe today.


Anyway, being fresh to the 8th Ed rules, there were a number of surprises awaiting for me through the process of the game before the clock forced an end to the game, most of which I found entertaining (though my troops maybe disagree). The sheer number of attacks that the Ogres can now throw at you under the new rules being the most heinous. All in all I did like the changes for the most part but I'll need a couple of games to pick up all the real meaning of some of them.


The Empire behaved themselves and put up a spirited defence against Ians Ogres and held him   to a draw but with the advantage with the Empire, mainly due to numbers.
Enjoyed the game and I am now looking forward to my first game in the Campaign against Kev's Dark Elves.


The whole thing has given me some impetus to get back to painting my Empire hordes (or at least some of them) so flaggelants and knights will be next on the agenda.
Posted by Hendrid at 20:10 No comments:

This weeks club game was a quick test game of the new(ish) Renaissance rules from AB One Games called Bad War.
The basic rule set covers the Italian Wars and the 16th Century generally and is of the same ilk as the AB One's 'Father Tilly' Rules, which I had heard of but never played.
We have been looking about for a different set of Renaissance Rules for a while and have not found an alternative set we liked completely, and aren't fans of FOG (although the Ren Version do look interesting) so seeing these rules on TMP we decided to give them a go.
Plonking down a random mix of troops, we went through the rules for the first time.

After having gone through the rules and playing a few turns the agreed verdict was that they were a fun set of rules to play and would certainly give an alternative to the more serious rules available elsewhere. The only down side to them is the appalling layout and generally bad writing, I would guess they haven't been proof read or at least not by someone who didn't already know the rules. They have probably been cobbled together from the previous rule sets as there are a lot of redundant terminology which may be left over from 'Father Tilly'.
That aside, we did enjoy the mechanics (once understood) and liked the War Token idea and the fact that the game produced a light hearted, fun, fast play game.
We'll certainly be playing them again, although the Army Lists need seriously tweeked, maybe the author doesn't play the period?

AB One Games have also produced a couple of supplements for the rules; French Wars of Religion and Tudor Warfare, both of which look interesting if a bit pricey for 26 page pdf's, but I will probably pick these up too.
There are more supplements promised in the pipeline.
Also this week I've updated ALBAtwo with a few bits and bobs but mainly with piccies of the finished terrain piece, the first of my 'Abbey' terrain project. 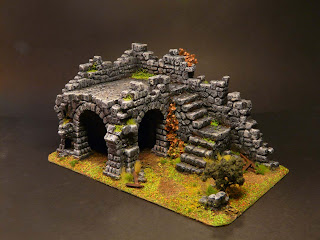 Check out the full finished article in the Terrain Gallery here