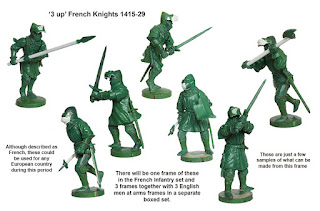 More news posted on the Perry's website on their Plastics Workshop in the form of some '3 ups' of their forth coming French Knights for the French Infantry box set and they look to be a very promising addition to their Agincourt to Orleans range.


As the pics show, and their press release indicates, there will be one frame of these knights along with 3 on the French (read European) infantry as shown on my previous post French Perry Plastics and interestingly, and probably a good move on the Bros' part, a separate box set with 3 sprue's of both the French Knights here along with 3 sprue's of their English Knights. 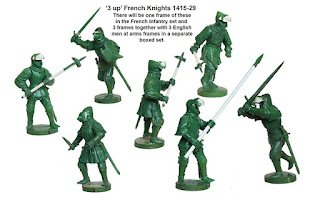 The release of these are promised for sometime in the New Year and once again I'll look forward to their release as they promise hours of joyous assembly and conversion ahead.
Posted by Hendrid at 14:56 2 comments: 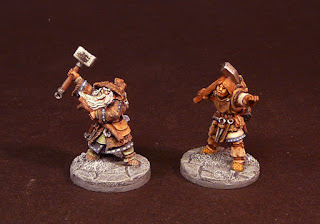 More figures for the fantasy skirmish front in the form of the Enchanter and Apprentice from the Frostgrave range, being sculpted by Mr Copplestone I was immediately drawn to these figures and having a penchant for the Enchanting business it was a no-brainer to go for these types for my first Wizard for the game.


Pretty much followed the Kevin Dallimore painting guide from the Northstar Magazine (more or less) and using the Army Painter paints to I ended up with slightly more muted look to the figures than I normally would but still reasonably pleased with the end results. 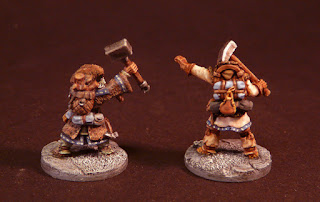 I'm currently working on some more fantasy skirmish types to go along with the Enchanter which I'll post once completed. 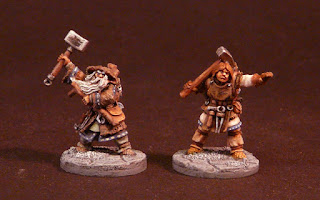 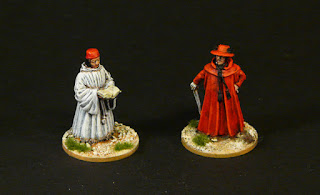 
Nice and easy paint job and now that these are done, I'll get the mounted versions painted up soon. 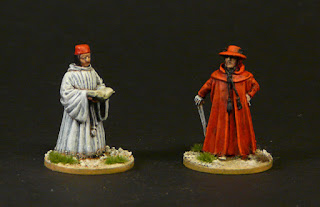 The fourth month of the campaign and the third month that the Scotti of Cenel Loarn ventured to do battle, having sat things out in May licking their wounds after the ding dong fecht with their neighbours in Pictland back in April.


Back up to strength they ventured south and looked to raid into the lands of Brits of Alt Clut (commanded by their Lord, Kev).


The randomly rolled scenario was the raid on the watchtower which once read up boils down to the attacker (me) trying to capture one of the defenders (Kev) Lords before they reach the safety of their tower. With the majority of the Brits starting defending their tower and a couple of warrior units and a lord coming on at the other end of the table the Brits have got to leg it to gain safety.

The Scots again randomly come on on one of the four side sections and have to try and intercept the Lord before he gets to the tower and then capture him. The fact that to capture a Noble the captors need to overwhelm the Noble and unit/formations he is with in combat by having three times the number of dice as the defender. No small task in its self. 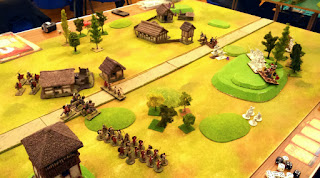 The dice were duely thrown for deployment and I threw a 3 and set up on the same side as the tower at the far end and Kev threw a four which meant he started at the opposite side. Pretty much the worst set up I could hope for. Curses. The Brits also get a bit of a head start by virtue that I only get to have two units on the board to start with with the rest of my force coming on on the second turn as they are activated. Double Curses.

The game started and the cavalry unit that the Lord was with having turbo charges horses and were half way across the table before I moved. Abandoning the warrior unit of Brits, the Lord and his bodyguard raced to the tower with the rest of the British standing at the tower ready to repel boarders.


The Scotti cavalry made a spirited last minute charge down the road scattering the missile troops to the wing and the Noble Raiders breaking the British Shock cavalry screen and forcing them off the table but the Raider cavalry accompanying them got caught by the British Warriors before they could get in the way of the retreating Lord, and were mobbed. 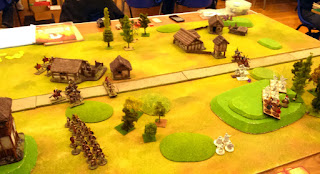 All the British Lords now safe and sound at the tower, game over with a fairly quick 3 point victory to the Brits. With light losses to both sides (as most of the troops didn't see any action or in deed even get close to each other) both sides are free to participate in July's fun activities.

Pretty obvious to both of us from the start that this game was going to just be a race of the cavalry, and see if Kev got any low dice scores for his cavalry move (which he didn't) so almost a foregone conclusion given the random deployment but easily could have been the other way round. Such is the unexpected (and random) nature of Dark Age raiding.
Posted by Hendrid at 00:32 2 comments: