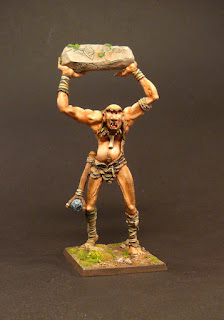 Here's an update on a little bit of progress on troops for my Oathmark Army currently under construction. Namely 'Peter the Giant'.

The model is, for those who don't recognise it, one of the 'Giants of Albion' set from the OOP Citadel Dogs of War range. I have a couple of the box sets from years ago and the other model from this set will be the next giant for the army, but won't join the ranks until the army list is due for expansion.

The model has a number of firsts to it for me. First model completed this year, first model I have completely painted using a wet palette, first to be varnished using spray varnish, first use of pigments on a model and first model I've named after a family member.

He's named after my father-in-law, who it has to be said it closely resembles, even down to the one good eye. Peter is no longer with us as he sadly passed away last year, but a wee bit of a memorium for him, (which I'm sure he would appreciate).

The model is all in all a bit of an experiment in many ways and I found I had to learn things all over again but I will perservere, as most of the experience was positive and reasonably happy with the end result, but with lots to learn.

I really liked using the pigments on the base as I was sure I would be and will be looking to experiement with them more in the future and see if I can get a bit more proficient in their use.

I did have an issue with the spray varnish, a matt one from MigAMMO. I sure the issue was not with the product, but my use of it, as the final coat ended up pretty shiny, which I don't like. So I ended up applying a brush coat of my trusty Windsor & Newton Matt Varnish to finish up. The fact that most of the model has had four varnish coats has had a slight blurring effect on some of the detail but nothing too worrying.

Next unit up on the Oathmark painting front will likely be the first Human Infantry Spear unit, with the Human Bowmen unit currently under construction, but next on the painting queue are some fantasy skirmish figures to be finished off hopefully soon. 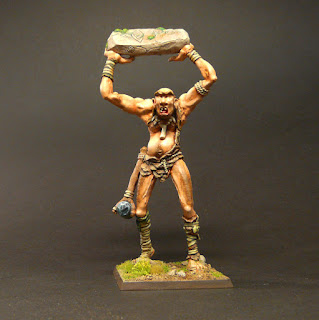