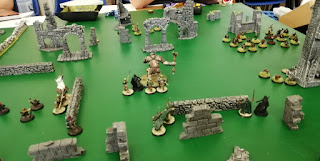 Being the penultimate installment (and final scenario) in the Battle Companies Campaign, where the Companies have crossed into Rhudaur on the trail of the fabled 'Needle' and tracked it down to the ruins of Caer Emwyn but this is also the lair of the brutal Troll. 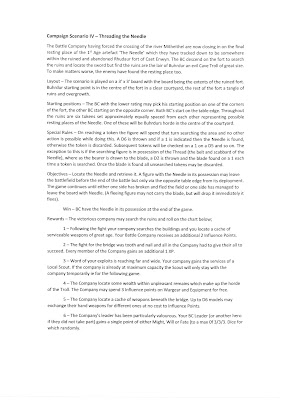 We randomly applied opponents with places being determined by a throw of the dice. Kenny's Easterlings were pitted against Kev's Warg Riders, Andy W's Mordor Orcs were up against Dave's Rivendell Elves and I ended up facing the might of Leigh's Hobbit horde.

Our game was pretty quick and fairly brutal with myself (as the good opponent) gained the initiative and advanced as quickly as possible taking the flank to avoid the Troll with the best of my hero's and aimed for the nearest objective token and started flying at the Troll. Leighs Hobbits did likewise in a mirror image of my deployment and sent some off to deal with my rear guard, leaving a toke force at the rear to try and catch anyone that got past the Troll and the majority of his force headed straight for the Troll. 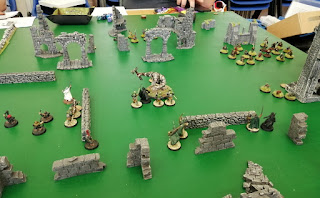 As luck would have it, and the worst result for the Hobbits, the first objective picked up was diced for and my Captain found The Needle on the first flip over on the flank. With that in hand the Captain and his accompanying guards started to make a bee line for the far table edge. I jumped in with a couple of Arnor Warriors to stop the Troll from getting in the way and exchanged fire with the advancing Hobbits on the flank. 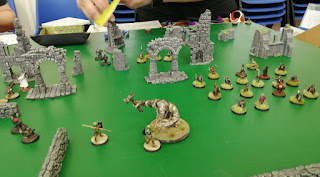 Leighs Hobbits closed on the Troll and my rear guard where an on going kerfuffle ensued with my Ranger Hero and a Ranger eventually got the better here but not before losing the Ranger to the Hobbits and I continued to keep the Troll busy while losing a couple to the beast. The rest of my band worked their way around the Troll to avoid the Captain and his race for the far table edge. 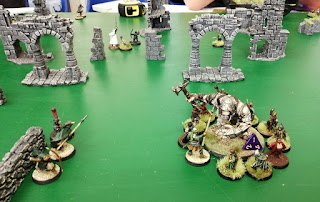 In short, once the horde of Hobbits managed to close with the Troll (and a little help from my lone Warrior, once again brought down the mighty Troll by sheer weight of numbers and Leigh kept his honorific as 'Troll Slayer' once again.

My Captain and his entourage swept aside the screening few Hobbits at the rear and swept to a victory claiming the mighty sword the Needle as the prize.

Elsewhere, Kevs Warg Riders defeated Kenny's Easterling but lost a couple of his number (and his victory counted to the good tally much to his chagrin. Andy W's Orcs and Dave K's Elves fought each other to a draw so the Good side gained a much needed two victories to their tally giving a final score of 24 to 25 victories going in to the big battle. This means the Evil side will only have one re-enforcement roll in the Defence of Amon Sul. (Though they might not need it as the Evil BC ratings are well in advance of the Good Side and with four players to three remaining the Evil horde will outmatch the defenders, much as it should be really).