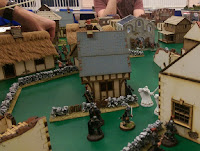 This week saw the fourth installment of the gripping cereal (no not Wheetabix) that is Mordheim Season 3, 'The Season of the Witch'.

The bands had gathered back at the smoldering ruins of what was once the town of Dalberz, intent on freeing (or dispatching, depending on which band was which) some adventurous prisoners rumoured to be left for dead within the town jail, following the recent rampage of Undead in the city, stripping the town of it's inhabitants.


Once again the Undead of Kev, the Skaven of Andy W, the Dwarves of Ian, the Marienburg Mercs of Dave, the Witch Hunters of Andy L and the newly appointed Protectorate of Sigmar were all present to lend a hand at freeing the poor souls and potentially adding (or not) to their warband numbers in the process.


It was noted that following the usual random deployment round the table, it was once again Dave's Marienburger's that kicked off the proceedings as was becoming usual too and the Merc's headed purposefully towards the Jail in the centre of the town, the rest of the bands followed suit but with slightly less alacrity and the Dwarves made more of a move towards the Skaven who in turn, dropped a gear and sprinted towards the town Jail too.


This proved to be the main event for the first part of the game with the Skaven launching everything they had at the Mercenaries who in turn all piled into the Jail and entered into a no hoplds barred punch up in the pokey. The Merc's first sprang the four of the cells, one of which held a Skaven Assassin, which they duly dispatched but didn't have time to do anything else as the Skaven piled into the building.

The Dwarves continued their plodding move round to the rear of the Skaven and the Witch Hunters continued their equally cautious move through the ruins towards the Undead. Meanwhile, the Protectorate edged forward and were sniped at by a lone Dwarves archer type the wily short-ones had left to guard their rear. The Undead equally slow to move forward edged along in cover moving slowly in the direction of the Jail.

As the fierce melee continued within the Jail between the Merc's and the Skaven, the rest of the bands continued their approach and mid game things looked as if they might develop into a massive punch up in the middle of the table around the Jail.


Then with a flourish, the Skaven were gone having lost their rout test having taken the worst of it in close fighting within the Jail despite the newly recruited Rat Ogre getting in about it and the Merc's proving their mettle.


This changed the scenery of the game and the likely outlook. With Dave's Merc's on voluntary break tests after his battle with the Rat People but occupying the Jail in a pretty strong position and now possessing all the surviving prisoners, the four other bands changed tack. The Witch Hunters picked up a gear and moved with purpose towards the Undead and the Dwarvesm, robbed of the arch enemies the Skaven, about turned and now moved towards the Protectorate who were beginning to be annoying. The Undead who till now had only magically sniped at the Mercenaries if one of them showed face at the door of the Jail now moved towards the Jail in an attempt to rest the prisoners from the Mercenaries before they legged it.


One the eastern side, the Witch Hunters surprised the Undead before they pounced on the Mercenaries and launched their attack on the lead Undead ones and once again a fairly brief but telling melee erupted as the WH hounds and Flaggelants charged in and though little over all damage was done they focused their attacks on the Vampire and with a mass of attacks landing they put the stunned Vampire on the ground and then finished him off.


The Mercenaries, now apparently ignored loosed a few pot shots out the windows of the Jail at the passing Witch Hunters and seemed to be particularly accurate today and dropped a couple of their number. This was followed by them deciding that nothing more was to be gained and voluntarily left the building and the game with a passle of prisoners in tow to add to their number for the following game.


Once again, the last two combatants were the Dwarves and the Undead and these two bands squared off in the ruins to the south of the Jail, but with the Vampre gone the heart wasn't in the Undead band (or indeed their hard hitter) and after an attempt to force a rout check failed and the casulties mounting the Undead called it a day leaving the Dwarves the victors of the field, bloody but unbowed but without any prisoners to add to their number.


Another good enjoyable game with lots of too-ing and fro-ing. The post game round out proved costly for the newbie Protectorate losing the three of their henchmen (but not the Priest mercifully) but the stonker of the story was the death of the Vampire leaving the Undead on a sticky wicket. They can re hire him but Kev will need to save his pennies for quite a while before he can afford to. The Merc's have now free use (for one game anyway) of the five Hirelings they freed and make them pretty tough stuff for the next round and the Witch Hunters and Skaven are getting to be a bit more of something to be reckoned with.

Next up for the Bands is a Raid, with the Dwarves to choose who they attack. Either a raid on the Necromancers Allies, the Witches Coven or are they going to move against one of the other Bands (either the Witch Hunters or the Undead) to reduce their capabilities for the forth coming battles.
Posted by Hendrid at 23:51 5 comments:

Last week, myself and John Muir had decided on organising a game for this weeks club night and with neither of us had anything particular in mind and we ran through a few options to see what peeked our fancy, and it was John, rather randomly for him, plucked out of the air the option of Warhammer, though with 6th Ed rules, being the latest version he had in his possession or indeed played. Myself, having liked the 6th more than it's proceeding versions a lot more (mainly because I had actually managed to win some games of 6th) thought this a splendid idea and we ventured into WHFB territory once more, the first time in yonks.

John went for his usual undead themed Vampire Counts and of course I led my Empire into the fray each with a 2000pt pitched battle, nothing fancy as both of us were a bit rusty on the rules to say the least.

We both picked things up again pretty quickly however, and other than me getting a few different edition rules in my head, things went pretty quickly all in all.

Apart from my atrociously bad deployment and putting my Great Cannon behind a hill and trees so that it only fired in the first round of the game, killing a solitary skeleton and my General and his accompanying knights never actually getting into combat, the Empire held it's own rather than crashing and burning as it would normally do against the Undead, though helped in a large dose by John's poor to terrible dice rolling and his miraculous ability to miscast spells in almost every round,

One thing I had forgotten though I remembered when it happened was that when defeated in combat and outnumbered by fear causing foes, your unit automatically breaks, and I remembered this when losing a combat by one and outnumbered by a couple I lost an entire unit of swordsmen and a Warrior Priest when pursued. I did have revenge though when for one my Greatswords actully chopped up John's nasty Knights right at the beginning with little loss and though by attrition, also managed to remove his unit of Wights with the Army Standard over about three, if not four rounds.

As usual with these games, we were pipped at the post by time and at the end of the game John had his largely intact Skeleton units on the table and his ethereal General plus a handful of Zombies still chewing away at the Flagellants and I had my untouched General and Knights plus half the Greatswords, plus a unit of Archers and a Unit of Handgunner's who also hadn't managed to do very much either.

A very enjoyable and worthy trip down memory lane for the both of us and likely to be repeated event sometime in the near future.
Posted by Hendrid at 18:22 5 comments: 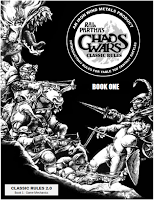 Earlier this week, myself and Andy W had a trial game of the 're-invented' Ral Partha Fantasy rules 'Chaos Wars'.


I had noted the existence of these rules somewhere on the blogosphere and of course checked them out when I saw that they were free for download.

With seven fairly chunky volumes available for download including Core Rules, Building Army Lists, Campaign Setting Details, Sample Army Lists, Personalities and such, there is quite a breadth of material produced for the rules.

I'm not completely au fait with the whole story behind the rules, but in short they are the set produced back in the Eighties by Ral Partha, but brought up to date by Iron Wind Miniatures who are now producing the Ral Partha miniatures lines and bringing these out under kick-starter waves.

We trialed a small game (meaning four or five units a side) using their 'low fantasy' setting, meaning small amounts of fantasy add-on's like beasts, heroes etc. and went through the mechanics of the rules which turned out OK though we did make a couple of mistakes in going through things on the first run as you often do, mainly giving heroes attached to units their full attack stats rather than merely adding to the unit stats, but all in all things appeared to be un-broken and worthy of further trials on a grander scale.

The basic mechanic of standard unit  sizes ala Lion/Dragon Rampant of 12 figures for infantry and 6 for cavalry being the basis of the game, and generally fairly similar in feel but with the addition of flank attacks etc. and some differences too.

All in all, though I am not hugely a fan of the standard 'limited' unit size/element type rule sets, these do appear to give a good feel for this type of rule set and produced a fairly satisfacory quick play game and as such are definitely worthy of future attention.

You can check out the rules and the various supplements on the Ral Partha site.
Posted by Hendrid at 22:54 No comments: