The latest exciting installment of Mordheim Season 2 was fought out last week as the intrepide bands followed on the trail of the Necromancer Allek and tracked one of his minions to his lair in Rauberdale up the Talabec River. 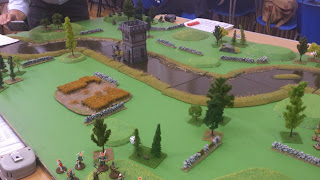 Converging of the Magisters tower in a race to take out the minion and loot the treasures that lay inside the warbands of Kev's Beastmen, Ian's Reiklanders, Andy's Sisters, Dave's Marienburger's and my Kislevite's raced towards the goal as the Magister and his bodyguard of skeletons made a break for it. 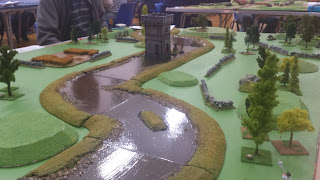 The action quickly started with my Kislevite's and the Sisters closing and traded a few shots at each other but causing little damage. Ian's group took a few pot-shot's at my flank at long range while advancing in a tight group towards the tower and the Magister as he left his tower. The Beastmen made a steady advance towards the tower from the opposite side of the river while Dave's Marienburger's on the same side of the river advanced along the bank while lobbing ineffective shot's at the Sister's. 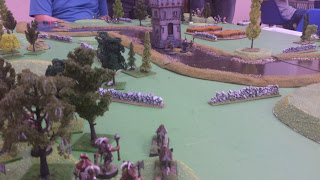 With typical luck the Magister on his first turn and randomly moving directly between the Reiklanders and the Beast men straight up the middle of the river and even worse luck occurred with his first spell casting, Eye of the Gods and rolling a 1 meant the Gods had judged him unworthy (obviously because of his cowardly action fleeing the scene) caused him to be sucked into the winds of chaos leaving only his smouldering boots and his skeletons to fend for themselves.

The Kislevite's and the Sister's were pretty evenly matched and after each had taken three of each other bands down both also failed their rout tests and promptly fled the field. 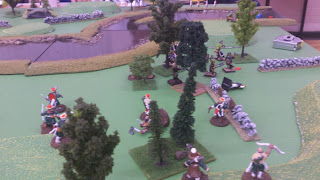 The game's main event then kicked off as the Beast men closed on the river and engaged a couple of the skeleton's on one side and the Reiklander's on the other engaging the other two. 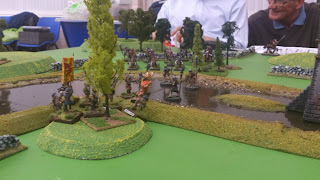 The skeleton's were pretty quickly dealt with all in all but they had delayed the two bands advance and caused both groups to bunch up on the river banks and with both bands hesitant to launch into the water and potentially give the other the advantage, the two bands moved towards each other over the islet/landing in font of the tower on a pretty narrow front. 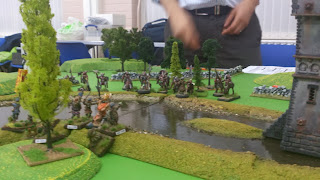 With the Marienburger's very slowly advancing on the Beast men's flank, the Beastie's finally gained the upper hand after a pretty lengthy skirmish between the two bands and the Reiklander's took a voluntary rout before too much damage was inflicted. 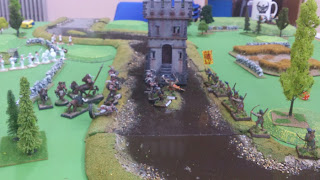 The Marienburger's then jumped into the slightly beaten up Beasts but even though inflicting a couple of further casualties (including taking down the Beast men leader before breaking leaving the Beast men in possession of the field and the goodies in the tower. 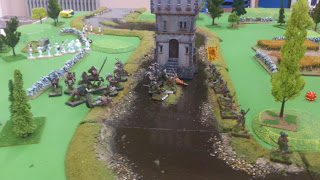 At a couple of points in the game, things looked very dicey for the Beast men but it was a surprise to everyone, including Kev, that they came through on top, but the band was probably worse off at the end with losses incurred including the leader being robbed of all his possessions including the Amulet of Allek, which will need to be retrieved in the next game to continue the plot line. 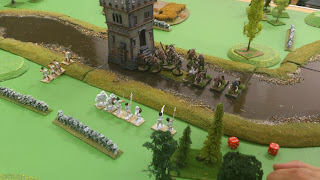 One thing which had worried the Beast men right at the start was the open terrain for this game, and the plethora of missile armed troops in the other bands, but as it turned out that all the shooting was extremely poor all round everyone obviously buying rubber arrows before the battle.

Another good game all round and the next sixth installment promises to be another corker of a game. Should be good.
Posted by Hendrid at 09:32 1 comment: