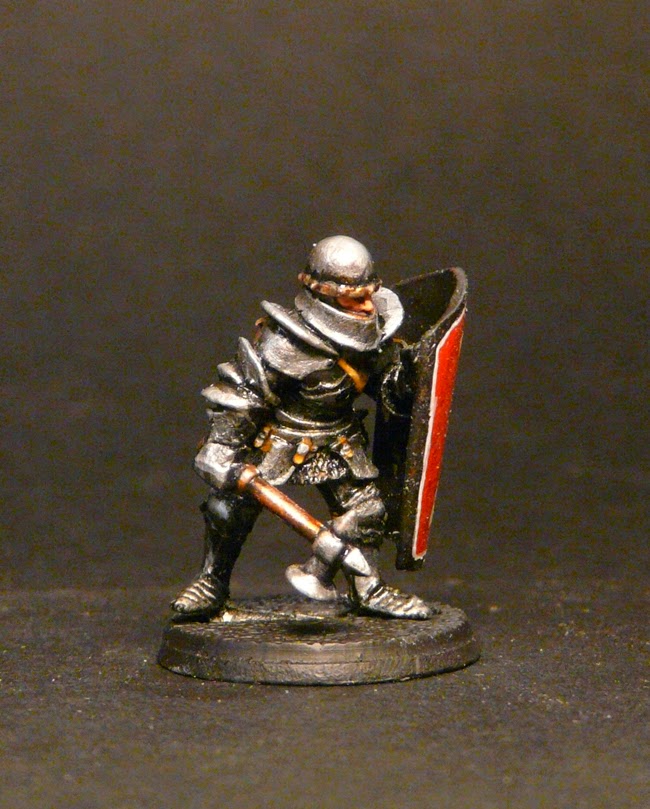 Just finished off this trial conversion of an assault trooper. The plan is to do a small unit of twelve of these chaps for my on going Lornian Campaign.

The figure is a conversion of one of the Perry's designed GW Dogs of War range Republican Guard with a Bretonnian Men at Arms plastic head swap, hand and hammer from the Empire Knights and the pavaise is from the Perry's own Orleans range. 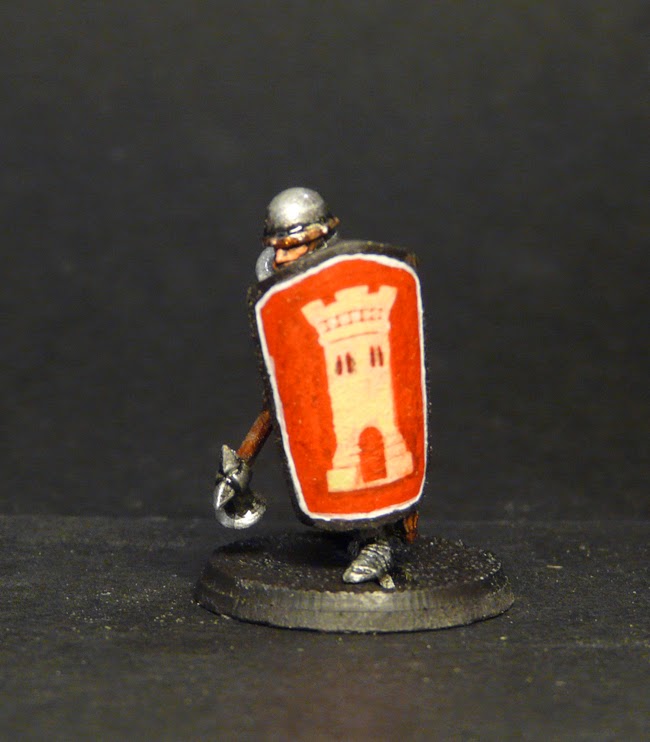 All the bit's fitted together quite nicely and the simple paint job brings it all together. Overall quite pleased with the result and it turned out pretty much as I originally imagined the idea. Not a hundred percent happy with the shield design but that can be tidied up and remedied with the rest of the unit, now that I know the idea works.

If you want to know a wee bit more about the background fluff behind the unit you can check it out on the Lornian Chronicles blog.

I'll start on the rest of the unit now and hopefully post the final results realively soon.
Posted by Hendrid at 01:09 3 comments:

Being the eighth episode of the ten episode season 2, things are hotting up with the bands getting quite experienced and the latest game proved to be the longest, hardest fought game so far.

With the hunt for the Necromancer Allek getting closer, the bands close in on one of the Necromancers minions, running him to ground in the ruined village of Egondorf where the mage is raising undead from the dead among the ruins. Holed up in the shattered remains of the great hall in the village the bands surround the junior necromancer and try and take him out to finally get the intel on the hide out of his master Allek.

The scenario is one of general mayhem with the only hook being that the mage and his skeleton bodyguards will make a break for it in a random direction from the second turn on a roll of 6 on that turn, on a 5 the following and so on. The band winning the game gets the intel first and gets it's choice of deployment in the following game. 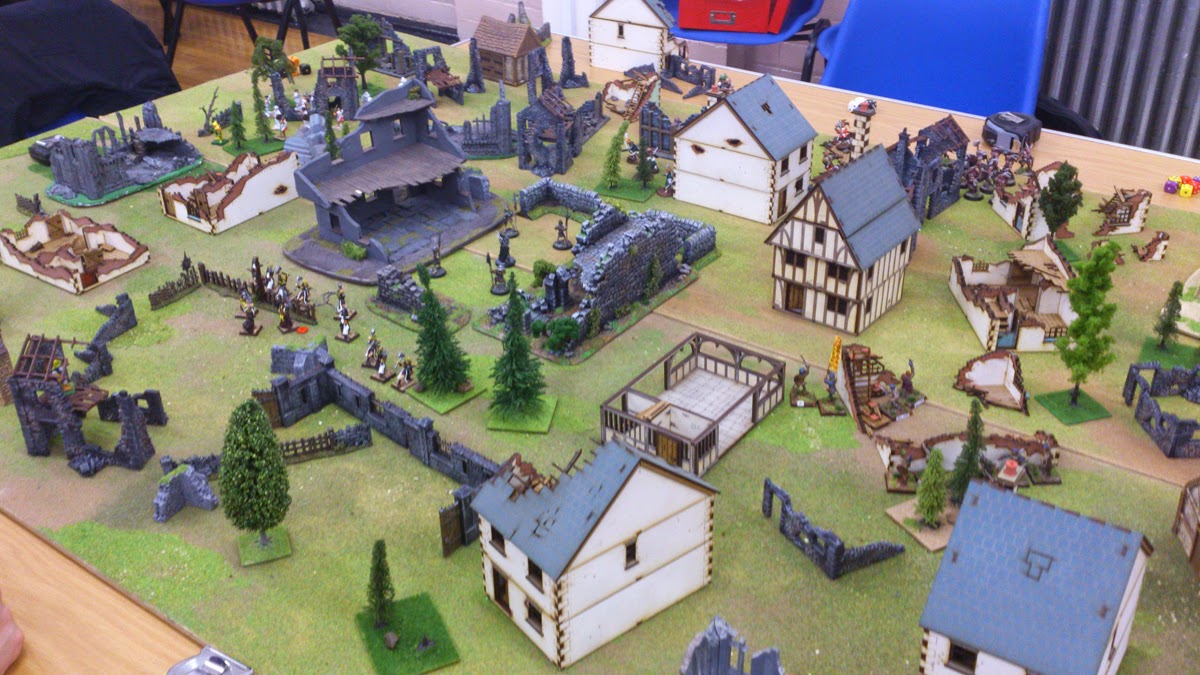 The usual bands were in for the kill, Andy's Sisters, Kev's Beastmen, Dave's Marienburger's Ian's Reiklander's and my slightly depleated Kislevite's were all present for the mayhem to follow. 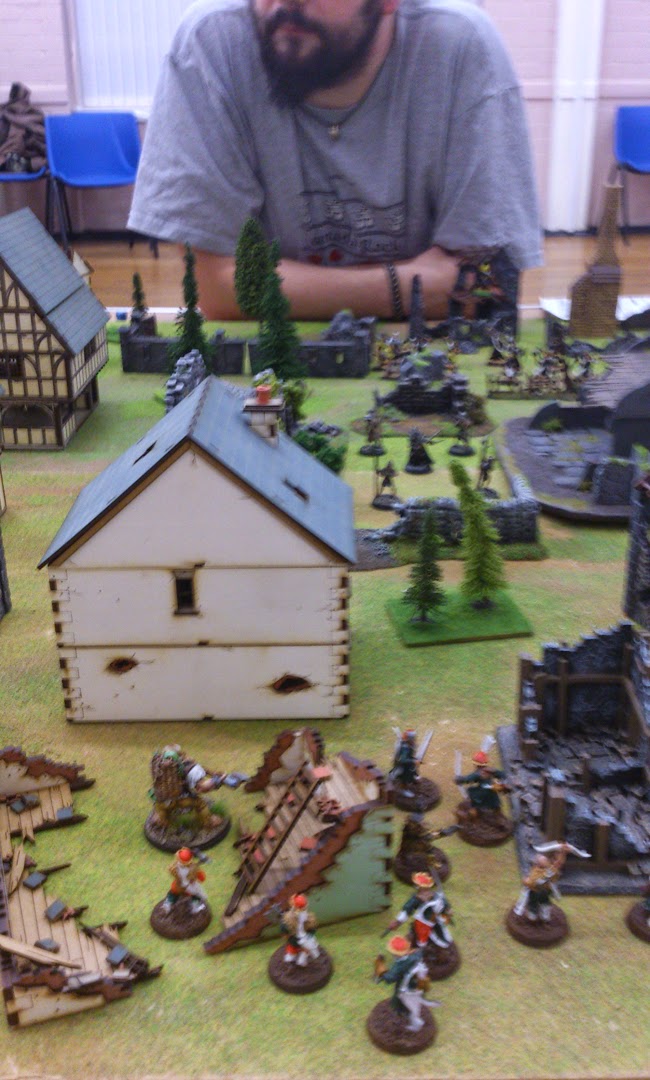 With the usual random deployment, it was clockwise Beastmen, Reiklanders, Sisters, Marienburger's and Kislevite's. Pretty much the same set up as the last engagement only with the Sister's and Reiklander's swapped.

The Beastmen started things up and the first move saw little effect with everyone eyeing up each other and seeing who was going to go where. Only the Sister's commited early going straight towards the Necromancer and his minions.

The inactivity didn't last long as it never does, and with the Beastmen's Centigor failing it's stupidity and charging the nearest enemy (the Kislevite's), theBeastmen were committed and Kev duly moved purposefully towards the Oblast's finest.

The Centigor charged in but failed to take out the Kilevite Merc Ogre.

The Kislevite's fired into the advancing herd and interestingly managed to take out two of the mass surging towards them.


The Reiklander's position further but Ian is playing thing's very cagey, and watching what transpire's eslewhere and is playing the waiting game on this one.


The Sister's move in but on the first run in, fail most of their fear test's and only a couple of gals go in but they manage to do a bit of damage to a couple of the skeleton bodyguard's anyway.

The Marienburger's spread out and move toward's the Sister's keeping to cover and generally keeping out of site as they move from cover to cover.


The Necromancer then chose to make a break for it, striaght towards the Kislevite's, who were now not really very happy.


The Beastmen now charge into the Kislevite's en-masse and although a brief struggle ensue's the Kislevite's go down hardly having time to swing an axe. Kev even managing to get two spells off in one turn (more than he has managed in the rest of the campaign in total.


The last remaining two Kislevite's although I'd have liked to do a last daring charge into the horde and possibly cause a casualty (and force a morale check) my own morale failed (un-surprisingly really) and the Kislevite's were toast. Hardly causing a speed bump.

While this was going on, the Sister's manfully strode forward and in the space of a round or two managed to swamp the Jr Necromancer and his skeleton guards in pretty short order though they did lose a casualty in the process, but caught the mage before he could escape his hideout. As they moved into the Necromancer they also took a side step toward's the Marienburger's who were now getting pretty close.


This now proved the next event as the Marienburger's  jumped in and very bloody melee ensued around the hideout as the Sister's tried to get as many in as possible but were slightly more spread out after dealing with the last skeleton earlier.


The Beastmen paused in their advance after taking out the Kislevite's and re-shuffled slightly and then began to move slowly towards the Marienburger/Sister fight.

The Reiklander's still hadn't committed yet but had taken up position toward's the centre of the table.


The melee with the Sister's and the Marienburger's continued for a couple of rounds with both side's taking casualties but in the end after a bad round with the greater part of the Sister's going down, their morale broke and the Sister's fled the field. Two down.


With the Sister's leaving the field the remaining three bands were left fairly evenly spaced around the table. The Marienburger's began moving toward's the Reiklander's, the Reiklander's moved into cover behind a couple of the larger building's and the Beastmen began circling round towards the Marienburger's also keeping to cover. All of which meant that the three band's were all moving clockwise round the table in a merry-go-round kind of way.


This state of play lasted only for a round or two because of the distance's to travel.


The stalemate only lasted for a short while as the Reiklandr's stood their ground pretty quickly and the Marienburger's moved into contact. A few shots were exchanged as they moved in but the unscathed Reiklander's were obviously the stronger here so Dave tried to move his band into the high ground and occupy the large town market where the Reiklander's would have to come up the stair's to get him or else trade shot's where the Marienburger's would have the advantage of the cover shooting from window's.

The Reiklander's quickly pounced to prevent this and with a short engagement took out a couple of the Marienburger's as they struggled to get into the building. This took the Marienburger's loses into the dangerous zone and Dave took the voluntary rout to limit the damage to his band. Three down.


The Beastmen now took the direct route and moved straight through the centre of the ruins and the Necromancers hide out towards the victorious Reiklander's. 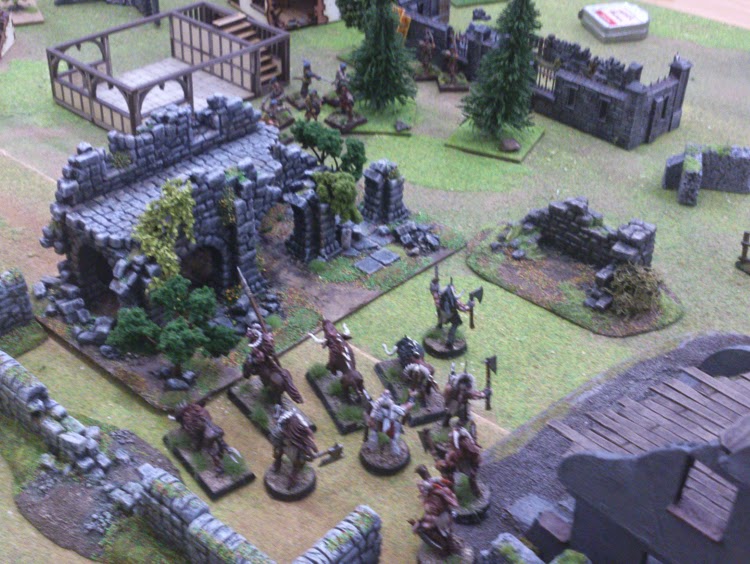 The Reiklander's moved forward and re-formed on the other side of the market building and prepared to meet the Beastmen.


The Beastmen, keeping together moved in for the kill but in keeping cohesion meant giving the initiative to the Reiklander's as they emerged from the ruined hideout but Ian's gambled on a round of shooting to force a rout test on the Beastmen (who only needed one casualty to have to test) rather than risking the charge and getting the chop in first.


Ian having already had a lot of bad luck with casualties this campaign decided to cut his loses and made it off the table with his band (if not his honour) largely intact which left the Beastmen the victor's once again. They get the victory, the small treasure the Necromancer was carrying but more impotantly get the where about's of the Great Bad One and get to choose their deployment in the penultimate game, the assault on Allek's stronghold.

Another stonker of a game with lot's of back and forth-ness and the first game of Mordheim where we nearly ran out of time. Pretty good for a skirmish game all in all.

Next time, things start to get really serious.
Posted by Hendrid at 23:08 5 comments:

It's been a while, but I've finished off another (pretty small piece) of my Abbey Terrain Project, namely the Walled Garden wall which is the second last piece for the west range. 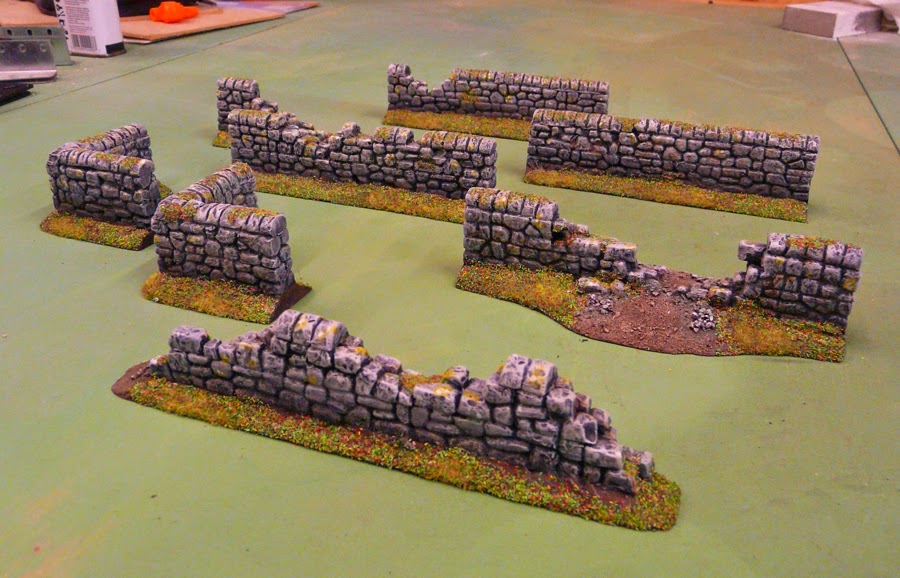 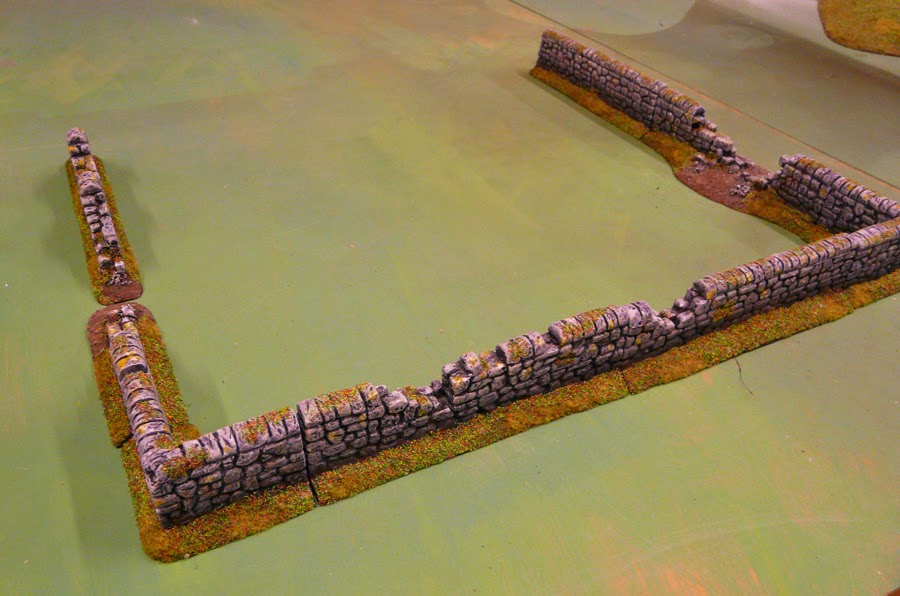 I won't tell you how long it's taken me to get around to getting them painted.

A couple of other bit's that have been looking to get finished off which I've finally gotten around to do were a couple of generic hills, which should be useful anyway. 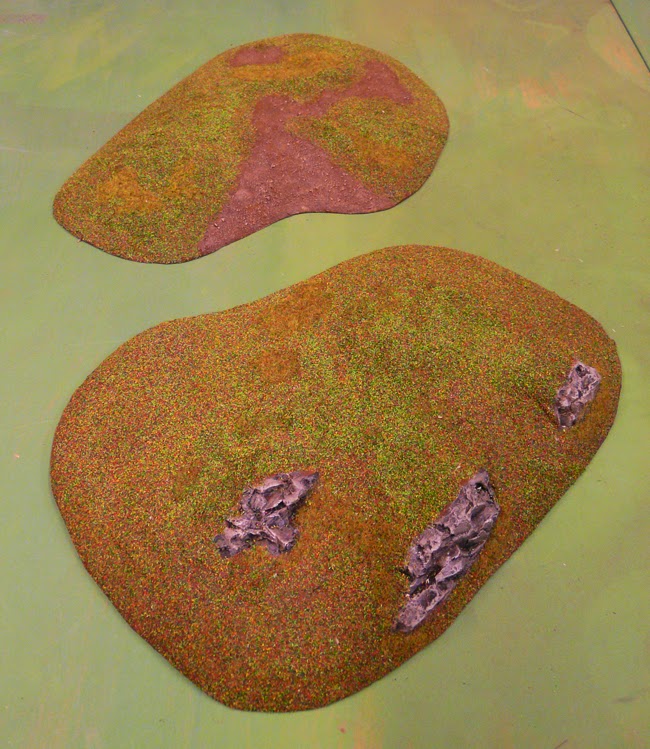 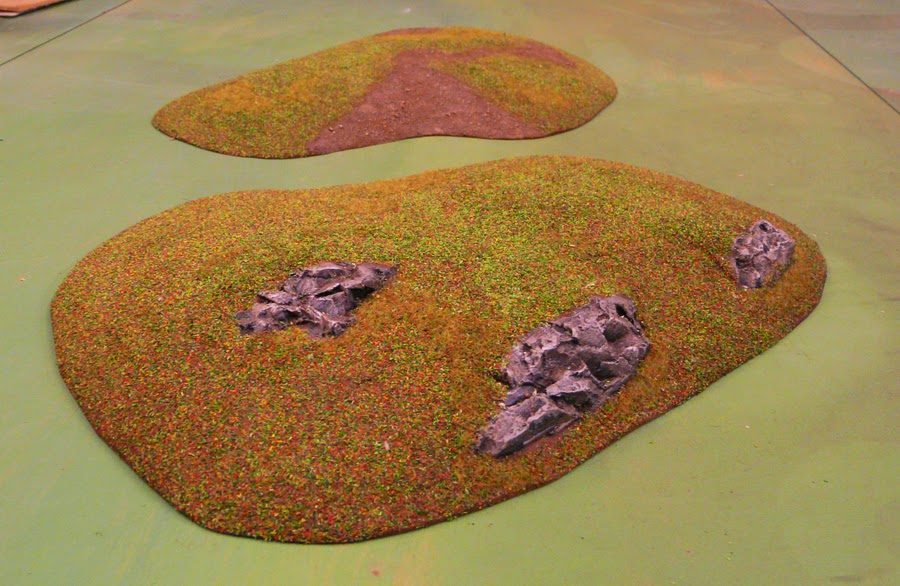