The penultimate game of the Mordheim Season 3 campaign rolled around earlier last week, and with all the antagonists ready for a difficult dust up, it promised to be a good one.


The set up was similar the the penultimate game last season with the approach the evil Necromancer's lair (the aforementioned Slayer's End, a huge and crumbling temple cum cathedral) covered by the remains of the ruined gatehouse and out houses appearing out of the surrounding Drakwald Forest. Guarding the only entrance to the lair was the warband's old 'friend' the Great Oak, a evil spirit possessed Tree (who the bands had failed to kill in the previous Season) and some accompanying Shadow Dryads, all tasked with preventing access to the lair. The actual entrance was guarded by the daunting figures of two animated/possessed suits of Armour.


All the bands were present to have a go; Ian's Dwarves (victors of the previous game, Andy L's Witch Hunters, Kev's Undead, Dave's Marienburger's, Andy W's Skaven and my own Protectorate.


The Dwarves had a free move (they needed it anyway) to kick things off and then, just for a dramatic change, the bad guys managed to get the initiative and got to go first moving fairly randomly but with the Great Oak moving from the centre of the courtyard towards the entrance. 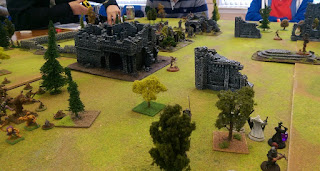 The Protectorate were next and moved as fast as they could towards the entrance and towards one of the Shadow Dryads that was menacingly moving towards the flank and managed to take down the first of the Shadow Dryads that was hovering around. The Skaven moved down the side of the ruins and began to rapidly close on the rear of the Protectorate with the much reduced Marienburger's slow to move up behind the Skaven and attempted a couple of long range shots at the disappearing Rats. 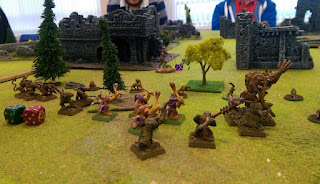 The Undead moved forward to wards the ruins tentatively at first and sent out their hounds to attempt to destroy the Dryad which looked to be heading in their direction but lost both beasts for their trouble, and the Witch Hunters mirroring the Skaven on the other side of the field, moved along the flank and towards the Dwarves, who in turn moved as fast as their legs could carry them straight towards the awaiting gate but in formation, keeping regular ranks with plenty of space to maneuver. The Dwarves quickly dispatching the first of the Dryads that ventured in their direction.

The Skaven quickly out paced the Protectorate who were forced to turn to face the encroaching rat-types. In an attempt to forestall the enevitable, the Protectorate got the charge in and managed to hit the slightly scattered front ranks of Skaven who were all the heavy hitters in the Skaven camp, and as usual screened by small rat types.


The Skaven rear ranks meanwhile lined up and in a decent show of volley firing sling shots, removed another of the Shadow Dryads while the rest of the band were busy with the Protectorate.


The Marienburgers continued their very cautious advance on the rear of the Skaven, lobbing the occasional arrow in their direction but to no effect and the Undead (headed by the new-ish) Vampire charged into, and made short work of the Dryad that had duffed up his dogs. 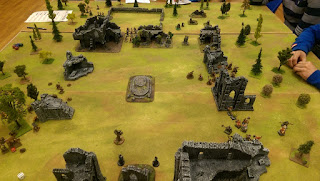 The Witch Hunters now began to head for the main courtyard area and began to head straight for the Great Oak while positioning their Halfling Scout in one of the ruins to take pot shots at the now advancing Undead. The Dwarves also continued their single-minded advance, taking out the last of the Shadow Dryads as it tried to take refuge in the ruins of Slayers End. 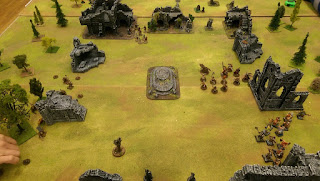 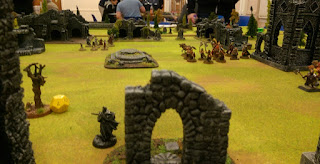 The game now swung in a north/south divide. The Undead broke cover and headed out into the courtyard, with the Marienburger's hovering round on the outskirts hoping to pick up on pieces left by the others combat and the Witch Hunters, originally heading for the main objective, changed course and about faced to face-up to the encroaching Undead.


To the north and the Skaven purposely headed for the Great Oak, now having moved to intervene between them and the entrance.. The Dwarves, moving slower but no less direct, now free from the possible attention of the Witch Hunters, moved towards the entrance on the other side from the Rats.


The Rats advancing on the Oak let out a hail of sling stones but only one of the many finding it's mark before the multitude closed in on the Oak and one of the door guardian suits. The Dwarves, slightly more spread, though deliberately, moved into contact with the other suit while shooting at the un-engaged Skaven ranks.


The Skaven and the Dwarvf ranks (including their merc Pit-fighters) made fairly short work of the magically animated guardians. The Dwarf blunderbuss took out a couple more of the rats but the Great Oak though beginning to take a few wounds continued to take out a couple more rat-types.


The Dwarves now engaged the rats nearest the door to try and clear a way into Slayers end and with the closing rounds a mix up of the Rats and Dwarves battling round the Great Oak who continued to bash anyone who came close.

Southwards, the Undead and Witch Hunters faced off. The Halfling Marksman perched on the ruins had failed to find his mark, but the subsequent answering fire from the Dregs managed to topple him and prevent further mischief.


The WH's charged into combat en-masse, and though out-numbering the Undead failed to conclusively damage them. After a fairly brief but messy struggle, the Witch Hunters broke and headed for the hills but only after taking out a couple of the Undead numbers putting them close to break test too.


With the Witch Hunter's gone, the Undead turned their attention to the Merc's who were now sufficient to cause the Undead concern having been depleated. The combat with the Merc's was brief and pretty decisive with the Merc's voluntarily routing to avoid casualties to their already much reduced band.


At the gate, things were coming to a conclusion. Though the Skaven had managed to take quite a few wounds off the Great Oak, it was still standing and dealing out the damage and coupled with charging what they could into the Dwarves, the Dwarves got much the better of this combat.


With extensive losses, the Skaven eventually broke while the Dwarves, freed from this combat and before the Great Oak could turn it's full attentions, piled through the entrance into Slayers End but down nearly a third of their number and having to leave their marksman to his fate and the hands (branches) of the Great Oak


With only the Undead left on the table, they attempted to close on the Great Oak from the other end of the Courtyard and though making three successful rolls on his break test, inevitably Kev failed the last roll before getting into combat and had to flee the field in the face of the terrifying Oak.

With the objective complete (just) and the bands reaching Slayers End, the next and final game of the Season will be the final confrontation to take down Allex the Necromancer. Kev's Undead, as last man standing did have the option to mount a raid on any of his opponent warbands prior to the final confrontation, but he declined the option thinking that this would do little advantage prior to the last battle.


The final game will be a bit different to all the others as there will be a staggered deployment, based on the results of this match with the order being determined by firstly the order that bands managed to exit through the gate and then the reverse order that the bands routed from battle.


This means that the Dwarves will again go first, followed by the Undead and the Marienburgers, then the Skaven followed by the Witch Hunters (though as different number of melee rounds were played in the two combats, that might actually be the other way round) and last on the scene will be the Protectorate of Sigmar (who will hopefully hoover up the goodies after the mayhem, but we'll see).


With the shadow of the last campaign conclusion looming over all Season 2 The Necromancer's Lair Part 2, the bands are keen to ensure the Necromancer doesn't get away this time. To see if they manage his demise or crash and burn, look out for the next exciting episode.....

Ghost in the Shell - Review 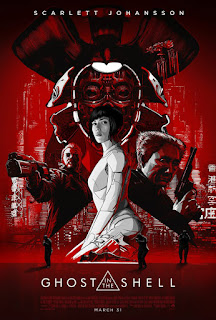 I caught up with the recent release of the latest Scarlet Johannson fight fest movie, 'Ghost in the Shell' last week.

Based on the 1995 cult manga/anime title of the same name, GitS is a fitting release to go with the current plethora of cyberpunkesque films covering this genre at the moment.

The film plot does stay largely true to the manga title but with the usual clipping to make the story line fit movie (under two hour) timescale.

The main plot line starts off and follows Major and the rest of the 'anti-terrorist' team in tracking down the shadowy figure 'Kruze' and while doing so, she starts to have glitches and begins to question her identity.

The whole movie had me half thinking in terms of Blade Runner, and there are definitely obvious parallels that can be drawn between the movies with a few particular night time shots which were difficult to separate. I believe the movie has been 20 yrs in getting to the big screen and it would be likely had in been screened sooner than now, it would have been labelled as a spin off from the classic. 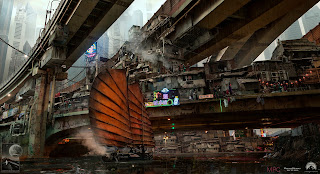 I found the film quite engaging and some of the supporting cast are particularly eye catching and characterful. Scarlet herself I though managed to pull off the role with reasonable effect and though reasonably pretty-fied to suit a Hollywood/mainstream release did move around in a fairly androgynous mode and avoided being a Black Widow clone fairly successfully with a hunched up plodding gait adoption which seperates her performance from the likes of 'Lucy' or 'Under the Skin' but Scarlet does look to be the go-to gal for this type of flick at the moment, probably due to likely box office pull.

There is not a lot else I can say around the storyline without major (no pun intended) spoilers if you don't already know the story, but many of the iconic images from the 1995 original have been retained within the movie including the lagoon fight with an invisible Major and the 'big boss fight out with the spider tank (which I thought really didn't fit well with the feel of the rest of the movie, but it was in the original so there nyah) and much robotic angst ridden self doubt through out. 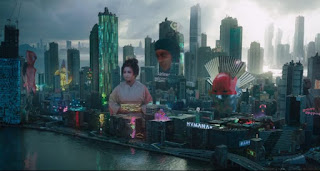 I have no doubt that purist fans will have derided the movie, pretty much as always happens with this type of re-make/real life visualisation)  and in fairness, a lot of the moralisation and conceptual rationalisation is missing from the movie. I suspect this is deliberate to make the film more main stream acceptable. (Lots of ...tion's there).

One point to pick up on this release though is the likelihood of more Cyberpunk titles to come, not least the up coming Blade Runner 2049 which I believe is scheduled for October this year, so GitS at least paves the way.


A pretty good cyberpunk movie in all and enough eye candy to make it worth the trip to the cinema. 'Ghost in the Shell' gets an acceptable 7 out of 10 from the Warblog, go and see it if you have a couple of hours to spare. 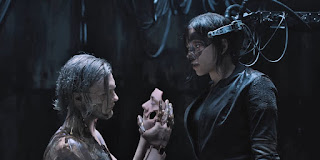