Christmas day is winding to a close, the family has been visited, large quantities of very nice food has been eaten, presents given and received and a nice day was had by all. Hope all out there have a suitably pleasant Christmas day and you are now all looking forward to Boxing Day second helpings and a bit of gaming perhaps if you're allowed by the Boss.


Anyway, raising a large glass of Cognac, hope all is well and wishing a happy and perhaps a more prosperous year for 2011 for one and all.
Posted by Hendrid at 23:40 No comments:

As promised, I have uploaded Random Campaign Events tables into the Resources section of ALBAtwo. A slightly untidy draft but I will tidy up soon on my pdf/excel skills and get tidier copies posted soon. 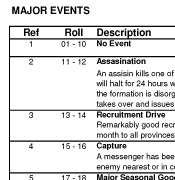 There are two tables, one each for Major events and one for Minor. These were written up for my long ongoing Solo Campaign which has now drawn to a logical close with a final climactic battle (which I will do a battle rep for in the fullness of time).
I think the tables are fairly self explanatory and are intended to give a useful starting point for anyone wanting to do the campaign thing and should be easily adaptable to your own way of doing things. They are based on my own system which is made up from all sorts of sources so may not 'fit' but feel free to chop, cut, edit etc as you see fit.
Let me know here if there's any questions.
Posted by Hendrid at 21:25 No comments:

Back from the Virtual Grave

Back in the land of the Virtual Living, my computer had an 'episode' and decided it didn't want to play anymore a couple of weeks ago, fairly terminal really.


However, after much cajoling and generally slapping it about, the beast moves once again. Did lose a bit of data, files etc in the process, but managed to recover most the important stuff. I guess that back-up external hard drive I was going to get for Christmas will be useful, just a bit late.


Not getting much done in the way of gaming recently with the weather curtailing my activities in that regard and 'she who must be obeyed' directing my domestic activities to decorating and re-building kitchens etc etc preventing any real figure painting pursuits, but that should change come next week, fingers crossed with a couple of games re-scheduled and a bit of spare time coming up.


The new files promised for ALBAtwo Resources should be with you over the week end, so watch that space.
Posted by Hendrid at 22:44 No comments: