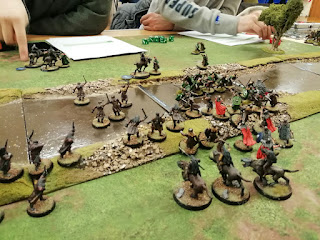 A bit of a late post as this was my last game of 2019 but hey, that's the way things roll recently.

With the release of the recent War in Rohan supplement for Middle Earth SBG, Kev wanted to give the troops a try out and plumped for the ever popular Fords of Isen scenario to give the rules/stats a try out.

Myself and Alan plumped for the Evil side (as usual) and Kev and Ian taking the Horsemen s side for the encounter, with all the toys supplied by Kev as usual.

The game was it's usual very enjoyable affair with the evil side having to kill Theodred and have 12 bods on the other side of the river by game's end being a very tough nut to crack. 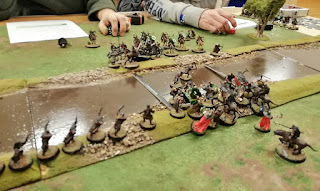 Luckily for us this time, Ian was the 'One King' and threw multiple 1's for much of the game and the Uruk Hai shooting was pretty effective when the Multitude of Rohan Mounted re-enforcements arrived being mown down as if facing machine guns.

Needless to say, the game was a ding-dong affair with much splashing about and only a couple of Uruks drowning trying to cross at the deep end and much heroics on both sides and Theodred refusing to die gracefully, but die he did in suitable style surrounded and alone on the evil side of the river and the evil side just managing to squeeze the victory on the last (twelvth) round of the game with having twelve bods alive and on the other side. Skin of the teeth stuff.

Anybody's game right to the end and a great way to end the year with. Look forward to more Middle Earth shenanigans this year.
Posted by Hendrid at 17:08 10 comments:

A slightly belated happy New Year to all for 2020.

Just about recovered from the dreaded lurgy having been laid low over the festives and not feeling up for much hobby activities during the break but up for more once up and on full steam once again.

All the best to all for the coming year!
Posted by Hendrid at 21:42 3 comments: