OK, its took a bit longer than I thought, a lot longer in fact. Four years in fact. That is to say when I said four years ago we would have another trial game of War and Conquest rules, I didn't think that it would take that long, but it did. But at least it finally happened.

The game was a 2000pt affair keeping things simple with my opponent of four years ago Dave K taking the Andalusians and myself the Almoravids again, probably with similar lists.

We did take a bit of time to get into the swing of things with both of us struggling to find rules we were looking for but knew existed but managed to track things down eventually.

We did struggle a bit as the first contact produced a fairly complicated melee with light troops fleeing through friends on both sides and a strong flank attack with multiple knock on effects, so this did pose a good test of the rules and a stronger test on ourselves to find the appropriate solutions to the problem. As a result we didn't get very far through the game which is probably just as well for me as things were looking pretty dicey by the end of round two.

We'll dig the rules out again (soon this time) to have another, more informed bash with the rules as they do have some nice points though as last visited they are very WABish. Looking at the army lists, I think these need to be re-visited but no tinkering with these until another couple of games under the belt.

I suspect we did get a few things wrong but thats all part of the process, we even talked about digging out WAB 2nd edition to see how that compares. 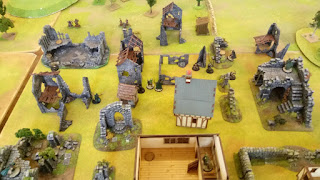 Managed to get another small get together for the Club Battle Companies campaign last week. A fairly small gathering with Alan, Dave K, Andy W, Kev and myself getting another couple of games under the belt.


Myself and Andy W played the next campaign specific scenario 'Catching the Thread', with Andy's Mordor Orcs attacking my Arnor band who were in possession of the ruined village searching for the relic 'The Thread'. 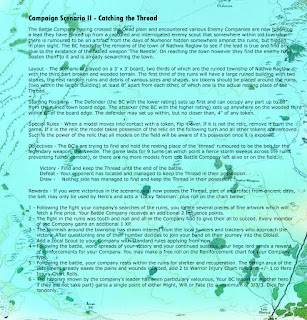 The outcome of the scenario was a definite military victory to the Orcs as the strength of my band is definitely in the shooting department but this strength sadly eluded me as any of my guys couldn't hit a barn door if it was lying on top of them on the day. The Orcs lost a few guys in the end but my band went down almost to a man. It didn't help that one of my Rangers was so well camouflaged that I forgot to use him for most of the game. (You might spot him in the bottom left of the first photo above). 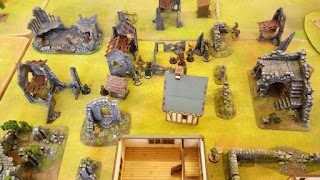 A good hard fought game and most enjoyable. The game result proved to be a draw in the end as I managed to prevent the Orcs getting a hold of the relic (the objective) right up to the last turn though losing it myself right at the end as my last man standing fled the field.

On the other games there was a prethala of other mayhem with Warg Riders, Elves, and the men of Gondor battling it out but several draws and one evil win were the results there.

With other previous games results in and a large increase in the number of no score draws adding up, the side of Evil is now slowly creeping ahead in the campaign tally with a score 11/14 good to evil wins.

Way back when in the mists of time, when I was trying out some trial works for terrain boards, specifically the Frost Ruins from Heroic Maps under my Terrain Board Trials - Side 2 post, I had had the idea to do some scenery elevation platforms utilising off cuts and spare card bits.

This as is usual with myself took a bit of time to get round to, and following my also usual over engineering a solution, I've finally got round to doing some of these 'elevators'. 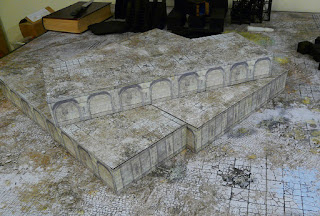 Using some strips of polystyrene packing bits I had lying about, were glued together to make a suitable thickness and cut into uniform lengths. These were then clad in foam core to make square and smooth. (You would be surprised on the variance on the dimensions from apparently uniform polystyrene, though low grade packing right enough).

These were then covered in a couple of sheets from the Heroic Maps sheets I had left over but also a couple of extra sheets printed off mirror imaged to cover each piece completely. The elevations then had some photo-shopped 'arches' printed on card and stuck on once again. 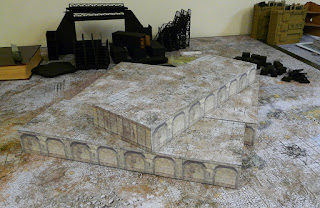 Finished articles are pretty robust and definitely useful for adding a bit of change of height to city scape terrain layouts, though a bit more work intensive then previously thought. I will add another couple of blocks in time to increase variety/coverage.