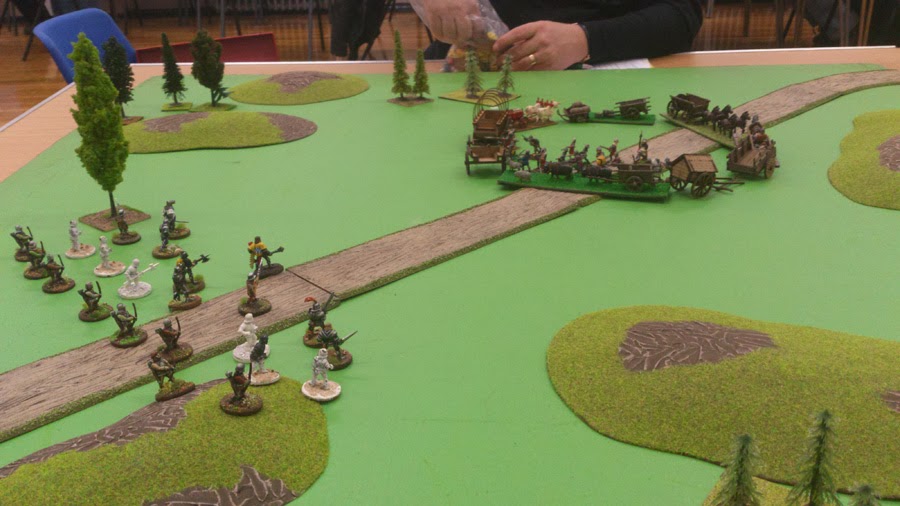 First game of the year at the FDWC for myself and something a wee bit different. Dave K asked if I was up for a game on Monday and I suggested a Medieval Skirmish, something easy and not too long as there were a few club duties to perform early on so time may have been an issue. So pulling out the trusty Retinue Rules ( a rule set which are older than some of the club members) and a nice and easy scenario in a mini version of the Battle of Rouvray (sorry we just like pickled herring - honest), we were sorted. Pete joined us on the day to throw a few dice and jeer at the fishy defenders. 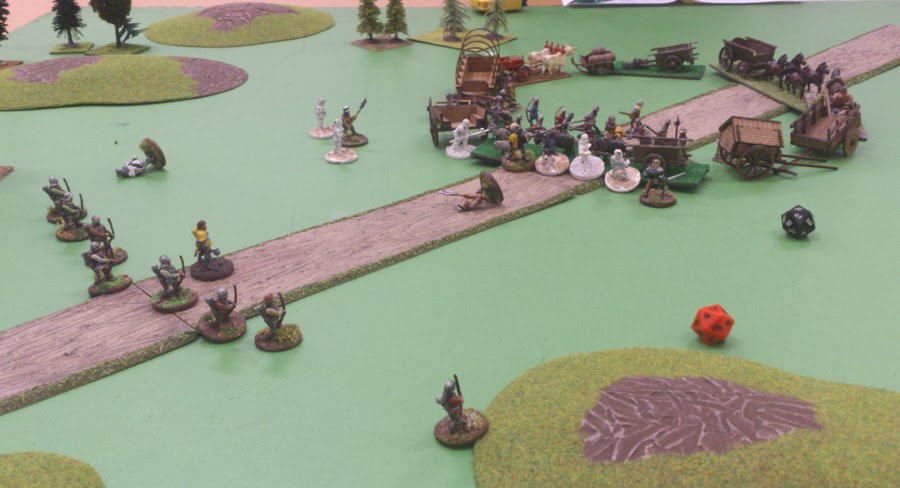 The forces consisted of a pretty heavily armed and armoured Scots contingent of 23 descending on the encircled English defending their herring, numbering a meagerly armoured 18.

The game went quite simply (we were using a simplified version of the Retinue rules which we have used before to speed things up) with the Scots advancing pretty quickly and the Men at Arms getting in the way of their bowmen in the process. The defenders fire took out three of the Scots MaA's pretty quickly with some pretty nifty dice rolling from Dave and managed to give the Scot's leader a bit of a limp wounding him in the first round of shooting. 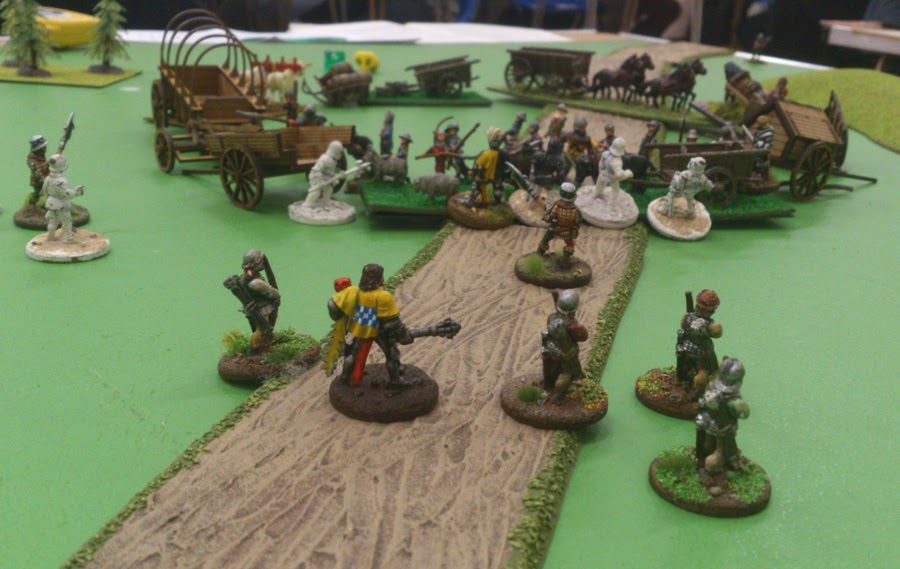 The attackers return fire while they advanced was pretty dismal all told and once the MaA's and assorted ruffians reached the wagons, the bowmen advanced into the fray to lend a hand. 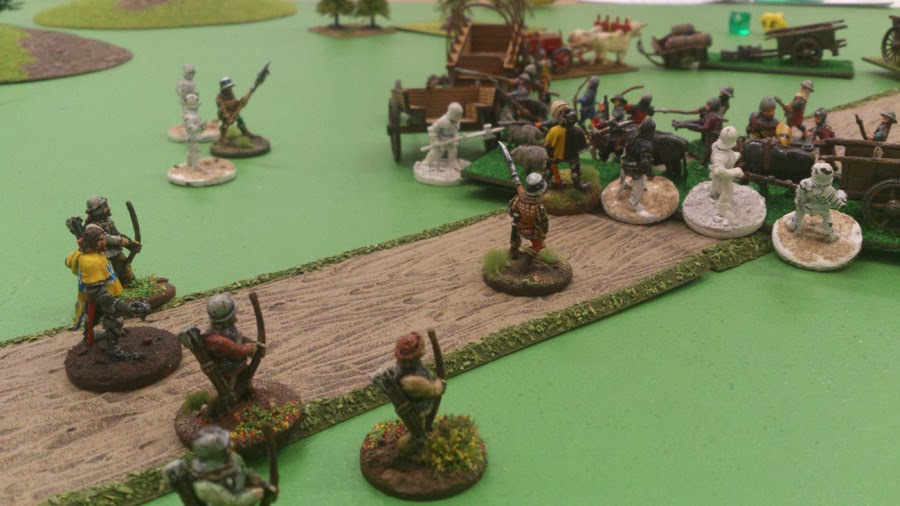 To cut a short story even shorter, Pete and myself's dice were pretty atrocious and we couldn't hit the side of a fish wagon and by round 10 or so, the defenders were outnumbering the attackers with the none of the attackers without some form of wound and several had been disarmed and were fighting with their side arms, it was obviously not going to happen for the Scots, recreating the outcome of the historical battle quite nicely. So the Scots beat a hasty retreat to lick their multitudinous wounds. The only success being the doughty Falstaff had been laid low by one of the Scots MaA's in the midst of the melee, which is something that we did manage to achieve that the real counterparts didn't.

A nice, simple game and lot's of fun for a quickly put together bash. Looking forward getting into this in the coming month's and getting more figures painted up and have some more scenario's too.
Posted by Hendrid at 00:20 7 comments: 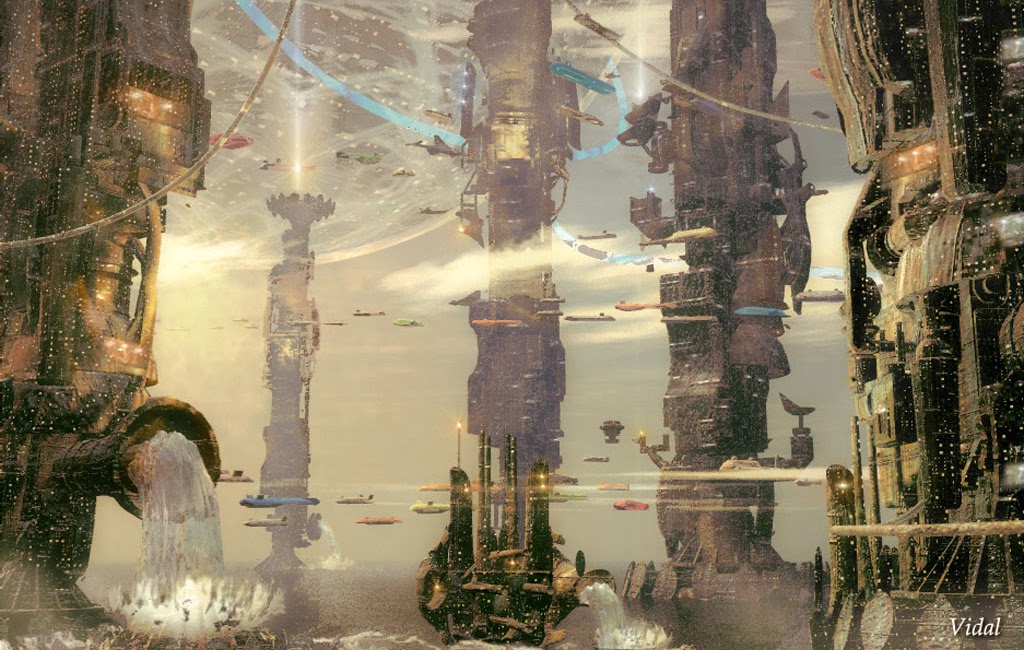 Once again the thoughts of  the year ahead and what has been achieved over the past year and what is planned is in everyone's mind and I'm no exception there.

I think the whole process of reviewing these things is very a therapeutic and indeed quite a useful task.

Last year was definitely a 'game of two halves' as far as getting stuff done and working to my planned output was concerned. The first half of the year I managed to get a reasonable amount done both in terms of painting/modelling and gaming with a great deal of variety thrown in to the mix of games/genres played. The second half of the year was a completely different story with work and life getting busy (in a good way) and my self imposed task of finally building my 'Man Cave' in the garden taking up nearly all of my free time and craft related energy.

With the 'Workshop' now pretty much finished in time for Christmas with all the power, lighting and data all installed the build has moved to the operational stage and I'm looking forward to reaping the rewards of this task with the first project being completed over the festive break being an Assembly Workbench made from off cuts and left-overs from the build. 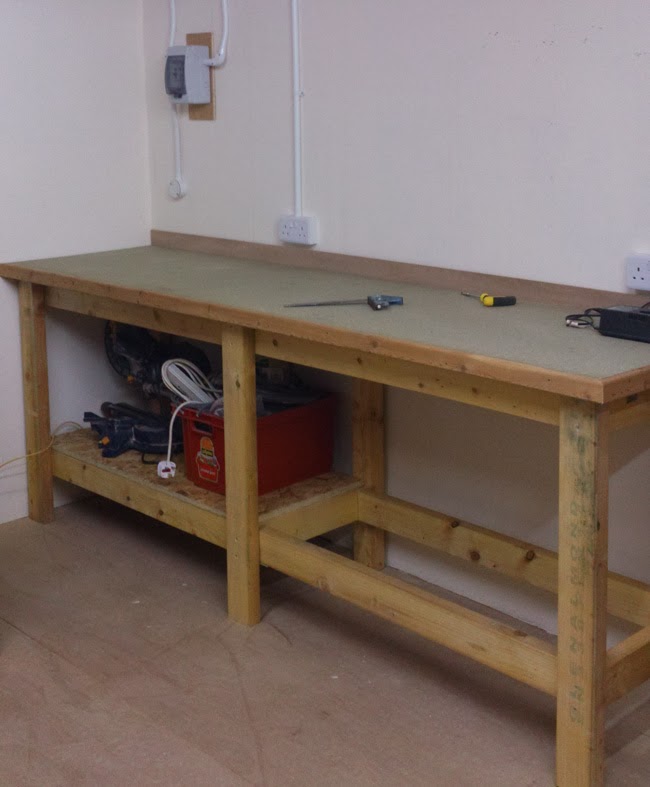 This bench is already being put to good use but more of that anon.

With the year being carved up with different tasks my plan for last year was pretty much blown way and although my overall output was up on previous years, it fell well short on what I hoped to achieve both in terms of projects but in terms of completed figures and terrain too.
So the revised plan for this year looks quite similar to last year, but knowing what I and life in general  (and my own whimsy) is like is probably more a wish list that a plan of attack.

* Almohad Berber Army - Looking to get a bit of progress on this army (which I've been saying for some time now) but with pretty much everything prep'd and ready to go this well used army deserves a bit of attention.

* Italian Wars French - Again little or no completion here last year but with my Painting Mojo suitably fired up and a plethora of undercoated figures ready to go, I have a good feeling for about this one for this year.

* Hungarian Black Army - Not up there on the priority lists and the reality being it won't achieve much attention, but I would like to get the unit of Clipeati finished as they've been sitting on the painting queue for two year and their complaints are beginning to annoy me. The rest of the 500 strong army will likely wait until next time.

* Future Wars Project - The one general success of last year with a good bit of progress and the current scheme should be complete and up and running for Easter. Will try and get some more of the progress here posted. I have had a couple of thoughts of expanding the original platoon level scope of the project but will keep that for later.

* Mordheim Campaign - This has been on going and has produced some real fun games and is now more than half way through the second season and building to the finale nicely. Once the current season is done and dusted by the summer, the Season three is currently in development for later in the year and looking to do something a bit different here.

* More Skirmish level gaming - The gaming over the last year or more that I've enjoyed the most have largely been skirmish type games, probably because they tell more of a story or paint a picture that enjoy, so more scenario driven skirmish games of all genre's are on the cards. In particular, I plan to do more Medieval era games and with Osprey releasing their new set of medical skirmish rule 'Lion Rampant' which looks interesting.

* Scots Army in France - This one has been rocking around for a while and has begun the take shape in it's basic form. This one will be in the fullness of time a full table top 15th century army plus a retinue sized force of figures for skirmishes. The long term goal for this one is to expand the force to be a full Scots experience and enabling an 'Grande Army' or a recreation of Harlaw. But starting small and building with this one.

* Overall Painting Target - Since I was well shy of what I thought was an achievable target of 400 figures for the year last time, I'm looking at getting 300 completed and shiny for this year. Since I did manage to get more than this number prep'd and ready to go last year this should have no excuses and with a bit of luck exceeded.

* Terrain Building 1 - The Abbey Project didn't get much completed as hoped but I did manage to get most of what's required casting-wise so I can get into the fun part of building and modelling here with hopefully the majority of the project done and dusted by the end of the year. This is really my only 'must do' for the year, as I'm itching to see the finished article in the flesh instead of my mind's eye.

* Terrain Building 2 - The Terrain for the Future Wars project having stalled in the summer is once again under construction and although this one is likely to be an 'on-goer', I'd like to get enough bits done for the summer to get a couple of games in. The Assembly bench is already covered with the assembled bits of gantries and hab-pods and once I get my airbrush working again it should be no time in getting these bits finished and game ready.

* The search for my 'ideal' large scale Fantasy Rule set will continue. So a trial of different rule sets will be trialed.

* Attend more wargaming/modelling shows - I would like to get to a couple more shows this year including one's I've not been to before just to broaden my horizons a bit.

* Re-furbishing some oldies - Having done some clearing out during the move of my wargaming stuff to the Man Cave, I found a pile of my old RPG figures. Lot's of great figures but most looking a bit worse for ware, so a bit of cleaning and re-paint on a select few of these will be in order.

* Solo Fantasy Campaign - My solo campaign 'The War of Rulership' stalled last year too, because of above mentioned activities, but now that I have a suitable venue that I can lay out games and maps and leave them in-situ, I'm looking forward to move things on here and getting things moving here as well. I did get a lot of prep work done here and spent a lot of PC time doing more detailed maps of the campaign area and so on. So I'm looking forward to some interesting blood and guts here too. Once some un-resolved actions are fought out I'll post these up for anyone interested on the Lornian Chronicles blog. 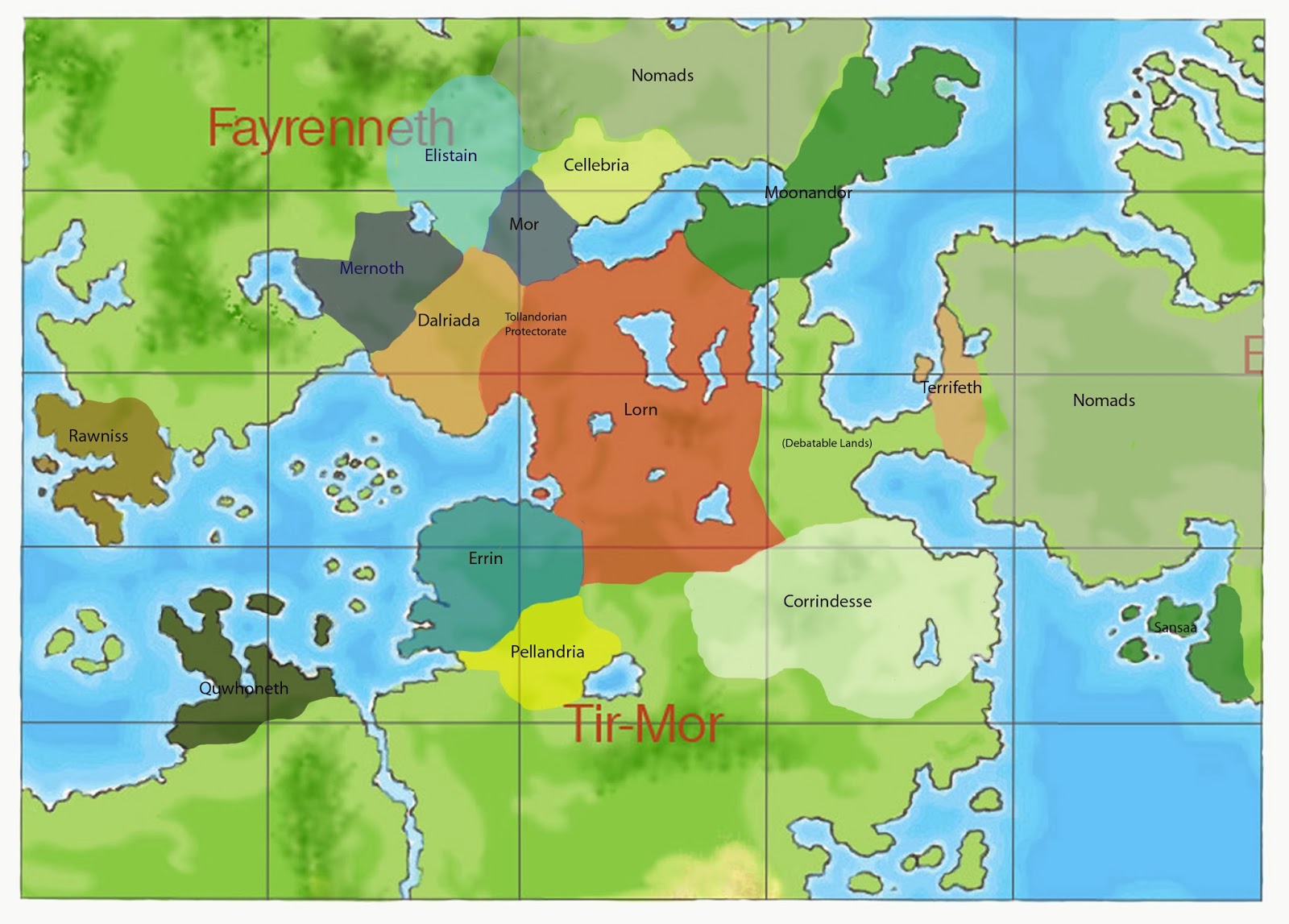 Generally more than enough to be getting on with over the next few months I think, and none of the above is in any particular order other than the priorities given above. I've learn't I can't force myself into scheduling these hobby related tasks and need to go with the muse on this. Which is the way I enjoy it really anyway.

Looking forward to a fun and varied wargaming year ahead. 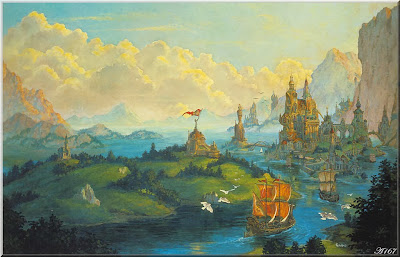 Wishing all a happy and prosperous New Year! 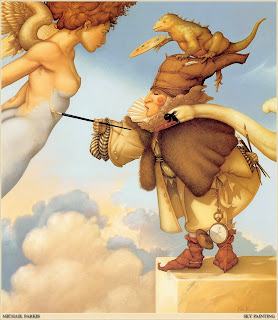 Looking forward to a productive and enjoyable year ahead, hope it's a good one for all.
Posted by Hendrid at 01:13 No comments: