A Merry Christmas to all!

I hope you've all been good boys and girls this last year and so Santa is good to you! Have a good one.

Another of my ongoing projects (and yes I know there are a lot of them) is my 'Abbey' terrain project.
I have been held up on this one for a while as it was taking me ages to cast the arch pieces from the Hirst Arts molds, with one piece a cast and needing four for a complete arch and the cap stones for the walls was one tiny piece a cast and I was needing, well lots.
So anyway, long story short, I modelled a few pieces from milliput and I have finally got around to making my own silicone mold which I had around and was still usable. I cast up the pieces I needed and have progressed the next steps on the project and have done the basic assembly on items 002 and 003, the central section of the west wall (002) and the walled garden enclosure (003)
Earlier in the year I did some sketches for the project to give me some direction and a skeleton to fit the project over and now I can proceed at a faster pace, at least faster for me anyway.
Next up is to texture both of the bases adding the usual detritus, and then get them painted up etc, all of which I aim to do over the festive season. Should be achievable.
Posted by Hendrid at 00:13 2 comments: 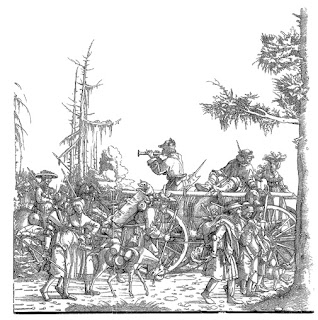 ...or 'a hundred thousand welcomes', in Gaelic, to the new followers of the Warblog;
First up this time is jmilesr, who dropped by. I have been following his blog Lair of the Uber Geek for a while and his breadth of wargaming periods is pretty impressive, worth popping in for a look.
Next to drop in is quidamcorvus who hales from Poland and has an excellent Mordheim campaign and blog going on at Warheim Fantasy Skirmish.
Also dropping in from Poland is P[akh]B who's blog Posthuman Diary is excellent for all sorts of wargaming goodness especially his future and Sci-Fi modelling, worth a trip there.
Next to pay the Warblog a visit and kindly sign up for more is Flags of War, who I know many of you will know for their excellent, well...Flags of War. Stop by their site for lots of 'standard' goodness.
And the Warblog also welcomes Jehan who hales from France and has a wide spread interest in all things wargaming (and I believe re-enactment too) and you can check out his blog at L'antre de Jehan.
All welcome to the Warblog, and I hope you continue to find something of interest.
Slainte!
Posted by Hendrid at 23:16 2 comments:

By Fire and Sword

Many who have been following my blog for some time will know of my keen interest in Eastern European Warfare and in particular during the late Medieval and Early Renaissance periods.
It therefore comes as no surprise that my interest was raised, indeed excitement induced when I saw an advert in this months Wargames Illustrated for the 'new' (at least to me) By Fire and Sword range of 15mm figures and I believe a soon to be released rule set of the same name.
Although I'm not really a 15mm gamer, the figures do look pretty tasty and the range looks to be fairly all encompassing as far as the 1585 - 1660's are concerned.
The range includes for all the combatants; Polish-Lithuainians, Tartars, Ottomans, Swedeen, Cossacks and Muscovites coming soon, plus banners, terrain and accessories like baggage wagons, bases etc. All look to be pretty good. The company site for interest is here; www.wargamer.pl.


The site here is for info on the  rules info and updates etc, and in Britain the range can be picked up from North Star Games who continue to add to their extensive and very interesting stable of wargames miniatures from around the world. In America, Warpath Games and Germany,Frontline Games.
I do prefer 28mm for my gaming but you never know, I might be tempted to dabble, but in any event, it is good to see more available for the period which can only be good, and also good to see another continental quality manufacturer getting into the wargaming market. More like this can only be good for
I also noticed on the Wargamer.pl site, various other bits caught my eye, including a book by I the artist Mariusz Kozik including pieces like this;
Might be worth tracking down too.
Posted by Hendrid at 19:54 7 comments:

This week I had a trial game of Impetus for my Early Italian Wars French Army, Dave K kindly stumping up the opposition, which happened to be a Late Wars French Army. Interesting to see the differences in a 300pt a piece army list for one thing.
Still being a newbie to the Impetus Rules, and this being only the second game in recent history that I have played the rules, Dave K was happy to give me a 'friendly' game to help pick up the rules, aided by Dave B and Marco on the sidelines to point us in the right direction.
As is my usual want, and in the interests of picking up the rules I decided there was no point in hanging about and having won the initiative in the first round decided to go 'head down boot swinging' and with the usuial beginners luck with these things (aided by some pretty good dice throws) proceeded to demolish the whole left of Dave's French of Gendarme, Arquebusier and Pike Block, and succeeded in holding his right wing of Archers and Arquebusier, winning the initiative in the three turns we played.
As you might think at this point (as indeed did I at this juncture) that the game was in the bag and what a jolly good game it is. However, and there always seems to be a however in these things, my  beginners luck was about to turn.
On Dave taking his third turn there wasn't much left for him to do bar a bit of shooting on his right flank and the big barny in the middle where the two big pike blocks were having a scrum. So, expecting this to be his last move before the collapsed left flank disappeared altogether and what was left of his army to be rolled up from the flank, went for the jugular.
His dice improved slightly, and my dice deserted me, and his pikes proceeded to win the melee and pushed my pike back three times and each time stayed in contact, and on the third failure I threw a six. Dave pounced on this like a fox in a chicken coop and proudly presented me with the rule of....8.2.2
Yup, my General was with this unit and of course the roll for avoiding his death was...not what I was looking for. Death of General and and Command Routed. End of game.
All a bit sudden, and unexpected, but at least now I know the risk of generals being in combat. Thinking back on it, the incident was very Italian Wars with defeat being grabbed from the jaws of victory by the inopportune death of some French General getting in the way of a pike. Great stuff.
Good, blood and guts game and thoroughly enjoyed by all. Hopefully more soon. Just need to get some progress on the painting front. More of that anon.
Posted by Hendrid at 21:11 7 comments: 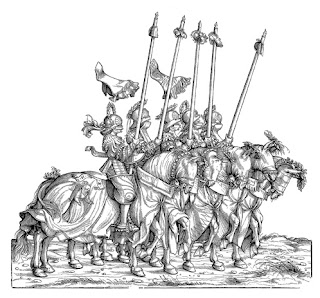 A big hello to Der Feldmarschall this time, who has dropped by the Warblog.

His blog Der Feldmarschall is chock full of historical info in his 'This Week in History' slots and lots more on rule sets, show reports and the wargame blog type goodness.
Posted by Hendrid at 23:09 2 comments: