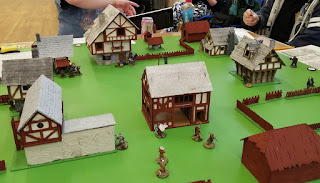 This weeks activities centered around a trial run through of the Thud & Blunder rules from The Ministry of Gentlemanly Warfare  chaps.

A five sided punch up with a fairly standard hunt the treasure and duff up nasty Trolls scenario to keep things simple for the first trial.


The five sided game went pretty well and provided a fun evenings entertainment and lots of food for thought for making up our own bands, which was the point of the trial after all. I was playing the Town Watch with generic knight and guard types with a wizard thrown in.

The wizard died almost instantly being a big target for obvious reasons but with limited range spells was easy bait for Dougie's orc archers. The combats about the town went well and eventually Dougie claimed the victory with the most victory points having killed almost all of my band, escaped with treasure and killed a troll.

I took a consolation prize for my knight being the last man standing after everyone else had left, but that was just me, everyone else was leaving anyway.

The rules use the well worn IHMN mechanics which work fine. The introduction of heavier armour types do make some problems with some match-ups being impossible, like my archer shooting at Ken's knight with heavy armour (AV14) could only hope to hit him on a 10 (d10) if he stood in the open and not moving saying 'shoot me'. But if you know the limitations then perhaps not much of an issue. We'll see.

The main thing noticed and agreed by all was that you need to make up your own band to suit your play style and play to strengths. Some well crafted scenario's would certainly make the game a must.

Will be playing the rules again definitely to explore them further and looking forward to some enjoyable games in the process.

Last week we managed to have a general get together with all the surviving players of the Battle Companies Campaign and staged the last random scenario and Campaign Scenario III play-offs.

Still in the game are Andy W's Mordor Orcs, Andy K's Easterling's, Kenny's Easterling's, Leigh's Hobbits, Kev's Warg Riders, Dave K's Rivendell Elves, and my Arnor Company. We also had Alan standing in with some more Easterling's so the pair-offs were equal and everyone could get the games played. 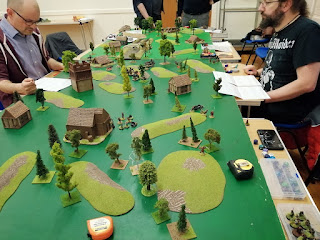 Three different random scenario's were played along with the Campaign Scenario III 'Bridge across the Mitheithel' Scenario being played by myself and Andy K's Easterling's.

This play through of the Campaign Scenario was pretty one sided as I was (only just) the lower warband rating so was the defender and in the first round as Andy's Easterlings approached the bridge my shooting was for the first time excellent and effective and took out one cataphract and putting the other on his feet and taking out a Easterling Warrior thus reducing the warband by almost 30%. Shortly followed by his only (hero type) archer.

Andy managed to reach the bridge and lining up with his surviving hero's and pike types behind pushed onto the bridge and with all in combat stopped the hail of arrows momentarily. Alas Andy's dice were appalling and after a short stalemate in combat another couple of his warriors dropped including his Captain and his warband broke leaving Arnor Victorious.

Elsewhere, the Elves routed Alan's Easterlings, the Hobbits got a bit of a trouncing from Kenny's Easterlings and the Wargs (counting as the 'good' force) beat up the Mordor Orcs. 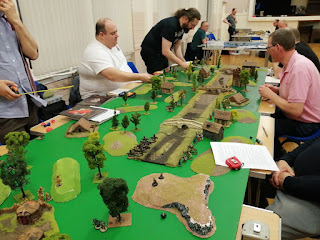 The second round involved everyone moving one place left and playing the Campaign Scenario III against there new opponent with myself and Alan playing a random scenario.


So Andy's Mordor Orc's were now facing the might of the Hobbit's (but Andy had to rescue his leader having been lost in the previous encounter and Leigh also having to do the same), Andy K's reduced Easterling's (Andy having lost his Captain to death) were up against Kenny's Easterlings in a bit of a Civil War encounter and Kev's Warg horde facing the Dave's Elves defending the bridge crossing.

My game against Alans Easterling's, a 'Show of Strength' scenario was fairly short as my shooting seemed to be reasonable successful again and managing to take out all but three of the Easterlings to the loss of only one Ranger so pretty successful night all told for Arnor for a change.

The Warg's (having the best chance of any of the band's of successfully crossing the river) charged pell mell for the river and after a viscous fight on the banks managed to gain the crossing and getting a victory but only just by avoiding break point by one. (all after spotting a minor flaw in the scenario due to game length, which rule was promptly dropped in the best spirit of making things up to suit at the time, all in the greatest tradition, of course).

Andy's Easterling's managed to make the crossing against Kenny's company again in a hard fought melee.

And with the Orc's trying to gain the bridge and regain their Hero from the far side (and the Hobbits managing to regain theirs from the opposite side) sheer numbers (the only thing in the Hobbit Companies favour really) they managed to cut the Mordor Orc horde down to size and hold the crossing and getting the Campaign victory. 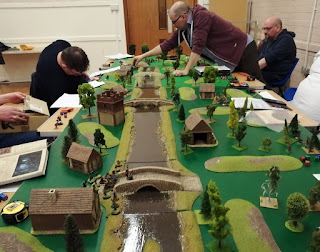 Another great round and most enjoyable. The results provided a 5/3 result to the side of 'Good' and a much needed boost to the good to the overall results now standing at 22/25 in Evils favour, so looking like Evil will have the advantage for the final assault on Arnor with only the penultimate game Scenario IV 'The Eye of the Needle' to go before the big punch up.
Posted by Hendrid at 13:41 No comments: 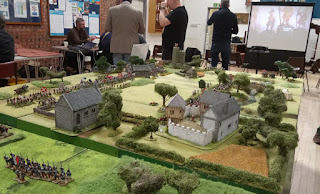 A bit of a catch up post this time for the Wargame's Hobby Craft Symposium, organised and hosted by David Imrie over in Leven a couple of weeks ago. Held over a weekend with different activities on the Saturday and Sunday.

Put together to be a different sort of wargame's event with demonstrations and talk, painting clinic, painting competition, video conferencing and other modelling teach-ins and of course some gaming activities too.


I managed to attend on the Saturday and thoroughly enjoyed the mixed fayre on offer including chats with Thomas Foss who demonstrated his 'Broken Lances' jousting game, Matthew Bickley on sculpting tips and several bods on terrain making in general and MDF tarting up in particular. 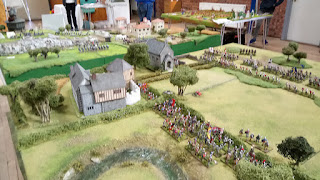 Food for the event was provided by the Sea Cadets staff and was easily some of the best fayre I've had at a wargames event, probably ever. The bacon rolls were worth the trip alone.

Some of the Painting Competition entries. 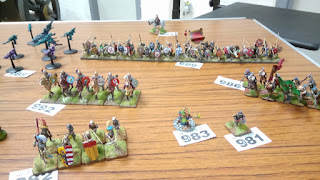 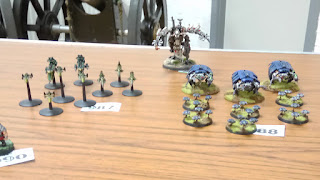 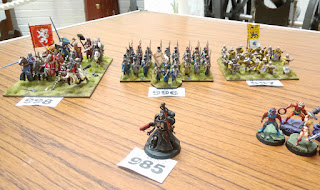 Thoroughly enjoyed the event and hats off to David and his helpers for putting on a different and thought provoking event. I look forward to hopefully attending next years get together. 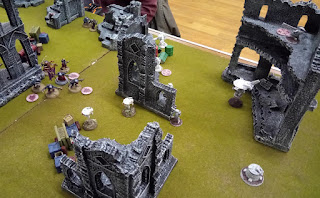 Last week I managed to arrange a trial game of Killteam with Kev at t'Club. A matched play between my Tau and Kev's Genestealer Cult.

Just a quick set down with a smattering of terrain and had at it to run through the rules and get a flavour of the game. 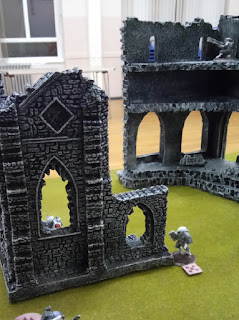 The scenario was a simple enough affair with each of the teams looking to get off the opposite side of the board with as many of the troops as you could muster before breakpoint. Most off wins.

The two teams were pretty much opposites with the Tau shooty and the Genestealers choppy, so I had to shoot as many as possible before coming to blows, so Kev advanced as quickly as possible keeping to cover and I stayed put and shot lots hoping to break him before he got any of his team off the board. 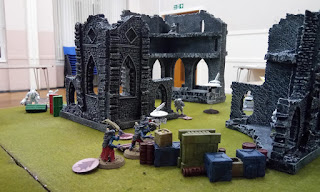 Needless to say, this was only partially successful as the board was pretty small so the Genestealers managed to get into combat though not until round 4, but only after losing half their number to the Tau shooting. But once reached, my Tau went down pretty quickly in combat.

The game did go the full distance in rounds with Kev managing to get two off the board at the end and gained the victory.

The game was pretty simple to run through though we did get a couple of things wrong but enjoyable game all told and will be looking to get another couple of games under the belt to see if I can improve and get a handle on the nuances of the rules. Maybe organise a mini campaign to get a bit of flavour too.
Posted by Hendrid at 12:53 6 comments: