I have been working, on and off, on a Near Future project for quite a while, probably three or more years. Picking up the odd pack of figures here, and the occasional vehicle there. Probably started by picking up a pack of Copplestone's 'Future Wars' range of Marines a few years ago at one of the Claymore shows in Edinburgh, and over a period of time this kind of grew, as these things do.

Anyway, around last year, again at Claymore I picked up the last pack of figures that my initial plan required and I now had all the figures I needed to create an mechanised urban assault platoon of three sections, command and vehicles.

I have now managed to get this project off the ground having decided on a colour scheme for the troops etc and now getting things done, picking this one up as the muse takes me, since this one is just because, not for anything in particular.

First up then is the first crop of vehicles for the platoon, two APCs;
Next up is the Command Scout Vehicle;
These are just about finished with just a couple of coats of matt varnish needed as they're still a bit shiny from the gloss varnish that I put on after painting for protection, then followed by matt varnish to finish them off. Generally pleased with these as they are the first vehicles I've painted since I was a teenager, (which you might guess wasn't yesterday).

I'm now working on the first section of 'assault marines' with a blue urban camouflage colour scheme and will post soon once complete.
Myself and a couple of mates have been searching about for a rule set to play a couple of games with these and have picked up a couple of rule sets including the synonymous 'Future Wars', Street Wars, a couple of freebie ones from Free Wargames Rules, and no doubt will be picking up the new Tomorrows War to try. Have had a couple of trial games just with a bunch of figures to get the taste of the rules but no definitive decisions yet as to which one or ones to go with. Will no doubt have fun trying to find out.
Posted by Hendrid at 22:24 2 comments: 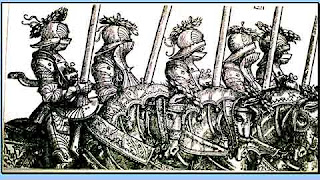 An hello and  welcome is due to Scottsz who has joined the Warblog recently, hope you continue to find things of interest.
Posted by Hendrid at 19:14 1 comment:

This week my game at the club was a one off game of WHFB with Ian who was wanting to try out the new Ogre Army book and some of his 'new toys' and I had agreed to give him a game using my trusty Empire.
As usual with a new Warhammer Army book, there was a few surprises in store for me but Ian hadn't gone the whole hog and just had a couple of surprises lined up. The main surprise was Ogre Scouts. I had expected scouts in his army of the Knobler kind, but not ogres so right from the start my deployment was snafu and the game was a brutal carve up from the start but not with out it's amusing moments, like the 22 hits from the Hellblaster on a lone Sabretooth, or the Empire General running around the battle field in terror.
It was a pretty quick game with me giving up at the end of round three with the bulk of the Empire troops pulverised and little in the way of units able to do much damage to a largely intact Ogre army, but an education and an enjoyable game none the less, with Ian's Ogre army all very nicely done, with all sorts of conversions and really good paint jobs and a joy to play against for the eye candy.
Don't think I like the idea of Ogre Scouts, not least because they in effect cost me the game, but the idea just seems silly, but hey that's Warhammer for you. The scouts must be REALLY good at camouflage, (visions of large hulking brutes holding up twigs in front of themselves tip toeing about pretending to be trees flashes in front of me).
Posted by Hendrid at 21:45 No comments:

Welcome to the Warblog 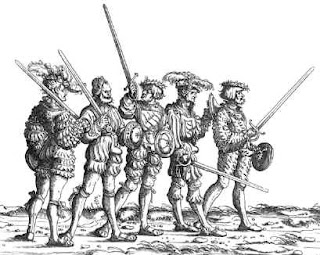 
Joao's site G.E.M. is perhaps well known to many covering as it does a vast array of modelling projects and all sorts of hobby products, worth checking out if you haven't already.


Geordie's site Geordie's Big Battles is also a treasure trove, featuring his adventures in 'playing with plastic model kits' (don't we all) and has recently been getting into Impetus. Again worth a visit.
Posted by Hendrid at 18:51 No comments:

Our occasional Mordheim campaign has moved a step closer on it's journey as the warbands now move into the outskirts of the city on their trek to 'The Great Prize'.
The game being played on Halloween, had a suitably 'scary' theme. If you've seen the film 'The Burbs' the games namesake, you'll get the idea. (If you haven't, you should, it's early Tom Hanks at his best).
Round three, 'The Burbs' was a different affair from the previous two outings with the bands moving into a more urban environment, things closing in a bit more. The number of bands were down a bit with my Gunnery School Cadets, Ian's Green Skaven (dressed up for Halloween and masquerading as Goblins and Spiders (nice touch)), Dave's Sisters of Sigmar, and Barry with his Skaven (who won the last round) being the only bands to venture out into the streets on an All Hallows Eve.
The four bands squared up and there was a good amount of reward available, seven shards, with an entry into a building being diced to see if it contained loot. If it did then there was a good chance it was being cared for by a member of the local Neighbourhood Watch, namely a Grave Guard.
So without much ado, the bands set about it with Dave's Sisters quickly searching a couple of buildings, while Iain's Skavolins sneaked into position to intercept the Sisters. Meanwhile the Gunnery Cadets climbed into the ruins while keeping a weather eye on Barry's Skaven as they sniffed out some shards.
The game proved to be pretty short and bloody. Dave's Sisters, not being too numerous to start with had trouble with the local Guard and then Iains's Skaven who took an early toll and Dave took the side of discretion after loosing three or four of his number in quick succession.
The Gunnery School faired little better and after three of their number failed to climb up into a ruin, they finally managed it, manfully took out one of the Grave Guard in a trice, and then all three failed their climbing checks and left out of action two of their number and the Gunnery Officer stunned. The rest of the Cadets lined up and let rip two volleies at Barry's advancing Skaven as they moved towards the Watchtower but only managed to take one out and wing another and managed to loose another two gunners to return fire. The Gunnery school then decided to quit the field, leaving the table to the rats. Quite fitting for Halloween really.
Barry's Skaven had a task on their hands with the Grave Guard, loosing three of his number to them, and tying up several of his number for a couple of rounds, and lost his Assasin to the Guard who appeared, quite rightly in the tower once searched.
Meanwhile the Skavolin advanced through the ruins and deserted building in search of booty, and all to no avail, with what was left of it appearing in Barry's searching. Iain, having seen off Dave's Sisters now moved to the centre to chase off the rear guard of Barry's band, taking out the last couple of stragglers and surrounding the tower with it's lone Guard and it's treasure. Deciding that the odds were he would loose more than he would gain from tussling with the 'hoody' he called it a day with Barry routing from the table with the lions share of the loot and Iain in possession of none but the field (except the tower).
So Iain claims victory in the third round, his second so far and managed to not loose a single figure. The rest of us retired to lick our wounds and replace our loses for the next round. As the bands move into the city proper, they search through the academic quarter in search of the Library and it's famed treasure.
Maybe the Cadets can prove their mettle then. They better...
Posted by Hendrid at 23:27 1 comment:

Welcome one, Welcome all! 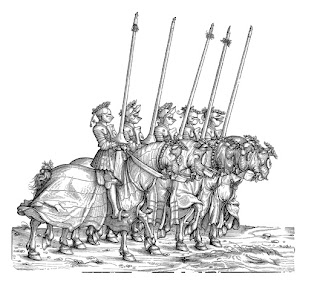 A welcome is due from the ALBAtwo Warblog to Timothy Lind and O'Shashar who have dropped in to the blog.

O'Shashar has his own blog Cupboard of Nurgle which details his activities in the lands of WHFB, 40K and modelling and has an 'Tale of Three Gamers project going.
Posted by Hendrid at 20:13 No comments: