A welcome to the ALBAtwo Warblog to Legion Games and DangerousBrian, Legion Games have all sorts of modelling goodness and usually interesting Eye Candy to Peruse and Brian has an eclectic mix of different genres of gaming all worth checking out.


Talking about different genres, I have recently been checking out the WAMP forum and reading the bi-monthly e-zine that they produce the, Portal. Generally a site for miniature painting with a lot going on. 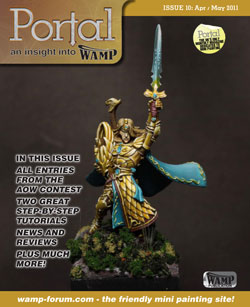 The Portal e-zine is especially good for a bit of lunchtime eye candy and it does feature new releases in the large scale modelling/painting scene, many of the manufacturers names I have never heard of and indeed the sheer variety of available models is mindboggling never mind the weirdness of some of the models you can buy. THe content has an admittadly high Fantasy/scifi content but does include historicals too and some of the tutorials for modelling and photography are especially good. Even if you don't like some of the 'out-there' models you've got to admire the sculpting skill that goes into some of these creations. Worth having a look.

Encounter in the Wilds

The next round of the ongoing WHFB Campaign was this weeks club game with my trusty Empire in the form of the Margrave of Streissen leading his troops to the relief of the Baron Sidle. The Baron is having a hard time of it at the moment with the Dark Elves knocking seven bells out of him and his forces recently and has been forced to retreat and is about to defend the village of Almsburg from the next onslaught.
Unfortunately for the Margrave he bumped into the Iain's Ogres, which the Baron had previously stalled in their invasion, and were now getting obstreperous again, and the scenario played was the Encounter scenario with both sides dicing to see what units deployed and which came on as reserve.
The Empire were lucky to not have any coming on as reserve but were a bit thinly spread having to deploy first and guard against flanking which is easy to do with the diagonal depployment zones.
The Empire launched an immediate assault on the Ogres centre with the Flaggellants and did a bit of damage before perishing to a man on the return bout. The Ogres two chunky units including Tyrant, Butcher and some chunky muscle then steamrollered their way forward on an overrun into the Swordsman horde destroying it but taking a few wounds on the way but winning and overrunning into the Militia horde with the same result, but then into the Margrave and his unit of knights. This was where the juggernaut ran out of steam having been weakened by the three units they had pulped now faced sterner stuff and thanks to some reasonable dice throwing and lots of armour saves the Tyrant, Butcher and a good proportion of the centre dropped and the remnants including the army standard bearer broke and were subsequently lost pretty much ending the game there as time had beaten us once again.

Great game and lots of nail biting stuff, especially when every leadership roll was saved with a nine and a bit worrying when you see 30 man units getting chopped every half turn but triumphing in the end.
Posted by Hendrid at 00:45 No comments:

A few more pictures from this years Carronade 2011, definately some eye candy on view and there was plenty of good games which a great deal of effort had gone into both participation and demo games.
Looking forward to this years Wappinshaw in Glasgow which promises to be interesting with it's new venue at the Concert Hall. 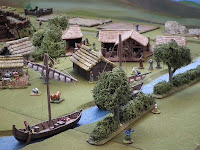 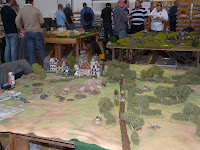 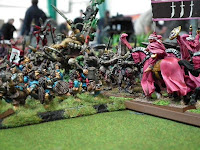 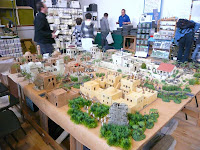 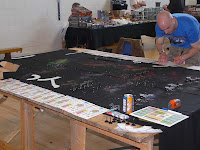 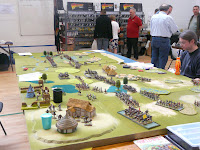 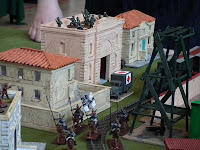 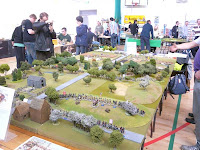 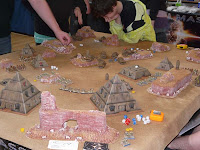 Descent on the Westfold - War of the Rings Falkirk Stylee

This weeks club game played by myself, Iain versus Marco, Dave B and a young guest, ably assisted by his Grandpa ;-), was a game of WotRs set up by Kev with him supplying the troops of both camps; the Forces of Isengard and the Rohirrim. The forces of Rohan defending a Westfold village and the Uruk-hai and Orc horde attacking and trying to take same before the appearance of the re-enforcements in the form of a sizeable force of cavalry.
The Uruk-hai and Orcs had a general advance as quickly as possible to engage the infantry defending the village and thanks to some poor shooting from the defenders managed to get there pretty much intact. Some bloody hand to hand fighting ensued but things quickly were looking grim for the defenders being sorely outnumbered. But in true hollywood fashion the cavalry arrived just in the nick of time as the village was about to be overwhelmed. The Isengarders then tried to quickly mop up the village while turning to meet the large host of vengeful riders of the Riddermark
Mighty clashes ensued and while still anyones game the clock beat us mainly due the fact that Kev while umpiring had to put up with a pile of novices to the finer rules of WotR (or indeed any of the rules).
Quite enjoyed the game and typical of most GW rule systems, once you get the hang of the principles, the thing goes pretty smoothly and quickly. An enjoyable spectacle all and all.


Also noted a welcome to Elquintodestino to the Warblog who has various interesting websites from Spain with all sorts of comic, game and modelling interests.
Posted by Hendrid at 22:26 No comments:

Recovered from the exertions from yesterday and an enjoyable but exhausting day at Carronade 2011 show yesterday. A good show and everyone spoken to including other clubs and traders seems to have had a good day too. 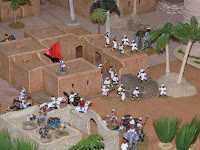 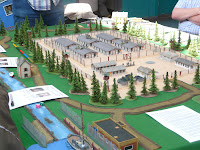 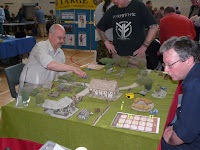 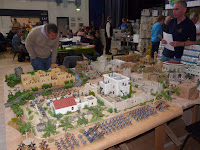 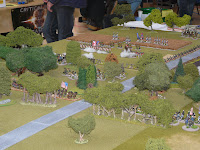 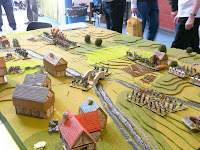 A good selection of games in period, scale and type were on offer and plenty of them (over half) were participation games so you could try your hand if desired. I wish I had had more time to check all the games out in a bit more detail but being engaged upstairs for a good part of the day with the painting competition prevented a leisurely study.


Lots of great entries and the other's will be available to view soon on the club website soon.

I thought there was a fair selection of traders at this years show but again not enough time to go round them all properly. I did manage to pick up three boxes of the Perry Miniatures Mercenaries at a very reasonable price (Thanks Marco!).
These, along with a box of the WotR infantry are going to be the basis of Italian Pike unit for use with my French Italian War army and occasionally Hungarians, and some crossbow also for my Hungarians. I am also thinking about another little project for my early Italian Wars French army but more of that another time. Picked up a couple of other bits and bobs for terrain use but some more quality time (and more ready cash :-) ) was needed.

All in all a good show and a really quick day. Looking forward to the next one already. Will post some more of the show photo's here son.

Just arrived the other day, much anticipated, was the newest issue of Arquebusier (The Journal of the Pike and Shot Society).
Up the usual high standard of the magazine with the usual divergent articles, including The Olaschin Campaign 1696 (Austrian vs Turks), some interesting period illustrations of landsknecht, Fairfax's Account of the Taking of Bristol, Reviews, Masterless Men 1589 a wargames scenario and a couple of other bits and bobs.
The journal is well worth the society membership fee alone and as membership also gives added benefits of discounts from many well known wargames figure manufacturers and also discounted access to the many society publications, I would recommend checking them out if your interested at all in the Renaissance and wargaming this fascinating era.
You can contact the society through their website; http://www.pikeandshotsociety.org/ Worth taking a look at what the society can do for you.
Posted by Hendrid at 00:17 No comments:

Welcome to the Gloranthan Army

Welcome to Greg who does a long running blog Gloranthan Army is well worth a visit for all things Runequest and lots more besides. Greg also rune the La Figoblogotheque blog which is a collection of Wargames related blogs, worth a visit to check out some missed blogs from around Europe. Good idea.
Posted by Hendrid at 18:59 No comments: