Back in 2016 I posted on the up and coming PC games I was looking forward to get a hold of and play in that year. All the games were purchased sooner or later except one. Yup, you guessed it Mount & Blade II; Bannerlord.

After being in development for the last five or so years the game has finally been released recently and I quickly purchased to help with whiling away a few extra free hours suddenly available recently for some reason.

Always a fan of the Taleworlds Entertainment Mount & Blade series in 'Warband' and 'With Fire and Sword' and played through both included mod versions they hold enough interest though the graphics are now pretty basic looking. This is the first and obvious update on M&B II with the graphic input ten times better than the original.

The graphics are very nice and the game map is much improved and much more appealing to the eye (the original Calradia and Eastern Europe maps being graphically sparse, travelling could get quite tedious) and with a lot more going on and more information for locations of objectives and info on encounters and so on. 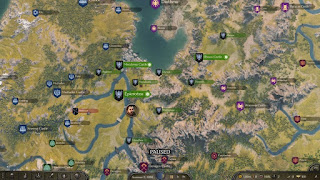 There's a lot going on generally but follows the same basic premises of the genre set up in M&B Warband so familiar enough ground though the controls are much more involved and with more alternatives as well.


The milieu is new as well, with Calradia gone and a new realm peopled with the same technological level as before, roughly 12th Century (ish) medieval times. The eight various factions you can choose to play (Aserai, Battania, Khuzait, Northern Empire, Southern Empire, Sturgia, Vlandia and the Western Empire) in all, follow general Medieval tropes and are recognizable from their inspirations; from Byzantines, Norman's, Viking/Scandinavian's, Rus, Mongols, Anglo-Saxon and Saracen types and so on.


The art work for the loading screens (which you see a lot of going from battle to map to town to dialogue) all give a good idea of the artistic look and feel to the game and are pretty good on the eye as well which is just as well really; 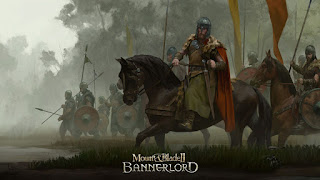 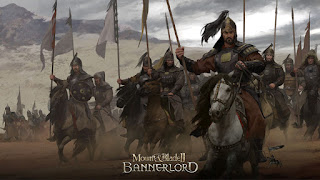 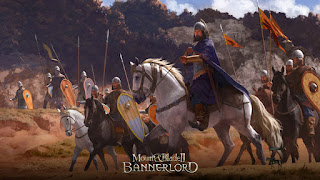 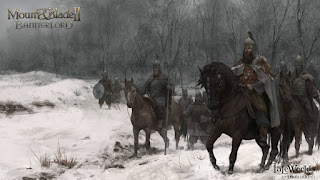 The foregoing artwork by a Turkish artist Ilker Serdar Yildiz, is very eye catching and evocative work and must of been involved in the art direction in the game build as the aesthetic is maintained throughout the game.

I'm still early on in my first game play but so far it is interesting and worthwhile play, especially if you're into RPG style games in the medieval period. The game does have a pretty steep character development curve. It takes a fair bit of grinding through early missions and hunting looters to get anywhere. The cost for failing missions is noted and can be quite prohibitive sometimes finacially, cutting off lines of trade or limiting future access to a town. There are lots of lines of character development, in social standing, finances, local and faction standings and notoriety that all play a part in developing and advancing your career, not just killing folk and taking their money as was pretty much the previous norm.

I do quite like this as it gives a decent challenge and can be quite political as well as militaristic in flavour. Lots of depth.

There are a fair number of mods available for the game already and  include the inevitable LotR make-over and I believe a GoT as well plus the usual AI tweeks and so on. I'll play the vanilla game through before having a look at these. 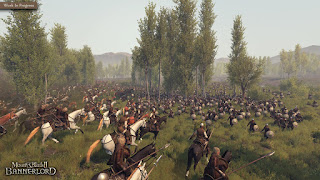 All in all, pretty favourable opinion so far and generally recommended for anyone into the more 'believable setting' RPG genre. An early Warblog rating of 8 out of 10 'Worth Watching' easily merited and worth the wait.