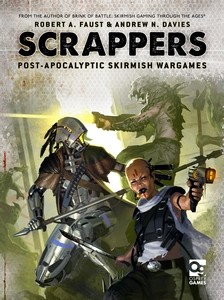 Recently picked-up, the new (ish) 'post-apocalyptic' skirmish rules set from Osprey publishing which looks to be a reasonable and well put together rule set from first looks.


The next in line of a spate of future/sci-fi/apocalypse (should apocalypse have a capital? I think it should) skirmish sets of rules that have been released recently or are up and coming and this one fits the bill quite neatly and ticks lots of boxes that people will want ticked.

Released last month and with the Osprey Games stamp in the credits, the rules are getting a good outing in the hobby press.

I'm not aware of Robert Fausts' previous work (he has apparently penned Brink of Battle, a historical skirmish game and jointly with Andrew Davies, a Fantasy version Epic Heroes) but Scrappers is a development from this previous work. Set firmly in a typical dystopian (is there any other kind) post-apocalyptic far future, the look and production values of the book are of a high standard and very eye-catching/candy through out. The supporting artwork, which work I have been unable to identify as being uncredited in the book, but looks to be by David Auden Nash, as he is mentioned in the Osprey blurb on their website, is very good with a pleasing style and adds a lot to the RPG source book feel of the ruleset. 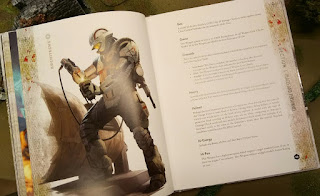 The background is a far future where several global AI's had a misunderstanding causing near global annihilation and resulting in nuclear war, famine, mutations and synthetic life forms all roll around making the remaining human survivors battle over scare resources. The milieu has a definite American written feel about it in style and colour and the author/s are indeed American so that can be forgiven.

There are, within the rules milieu, seven factions, or more correctly six factions (Ecotopians, The Purge, Gamma Lords, Palladium Athena, Architechs, and the Sons of Entropy) and a catch all for everyone else (Freelancers), available for your warband creation.All of these fit within the usual stereo-archetypes and can be made up of the three races; True Humans, Synthetics and/or Mutants.

All the Races and subsequent faction all have particular 'Traits' which are unique to their group and race and their are subsequent traits (skills) which can be given to each member to kit him out and make each figure stand out.

Humans are smart and hard to kill with survival instincts (they've managed to survive so far so must be good at it) and get failed gear check re-rolls.

Mutants are subdivided into three sub groups and get trauma re-rolls and are immune to some types of radiation. 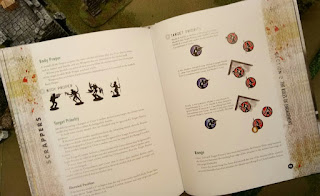 Synthetics are immune to gas and poison and can ignore target priority restrictions and are also sub-divided into three sub groups each having their own bonuses.

To start with the game, you will as is standard have to design your warband (Crew). A good percentage of the page count is given over to how to do this and give you the stats for abilities etc. If you stick with rules background their are guidelines and restrictions on how you put together your band based on the Factions, mainly based on race. ie The Purge, a bunch of racial fanatics can only have True Humans within their ranks, conversely the Gamma Lords can only have Mutants, you get the idea. 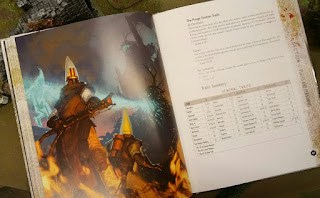 Once you've picked your faction and life-forms, you give your characters stats which are based on Combat, Command and Constitution. You can also buy extra traits (of which there are many to choose from) and once designed, you finally equip your crew with weapons and armour. Pretty standard fayre so far.

The game itself is based around D10 ( a factor I like) and is heavily based around your crews' commander who provides your group with activation points so your looking for a high command value for your commander. 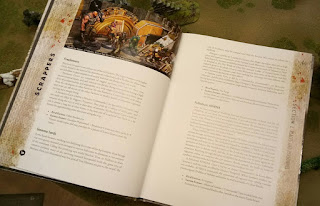 The combat sequence plays out in a similar fashion to that of say Urban War where the players take turns in activating models one at a time and though the terms have been changed, the equivalent of 'overwatch' and and so on, is in the mix in your average round of play. 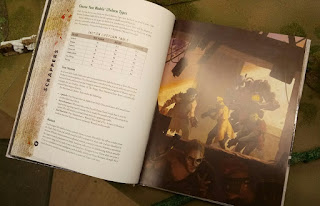 When throwing to see if attacks succeed you are generally throwing a D10 and adding a stat value (say combat) and you compare the result to a similar roll from your opponent and if equal or higher then the attack succeeds. The defender can hen attempt to avoid damage by comparing constitution and armour plus D10 and depending on result can die, receive a wound or be shocked.

The core rules cover all the usual things of cover, movement, close combat and Psychology and the inevitable break tests. 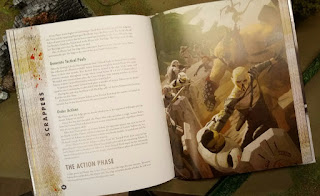 The Campaign focused part of the rules is where I think most of the interest in this type of rule set lies, ie for an extended romp with meaning and developing a band/crew to see what flavour it develops as with most skirmish rule sets.


Scrappers is meant to be played as part of a campaign  and your crew will adventure through the Fallout-esque environment earning experience and buying new gear etc. 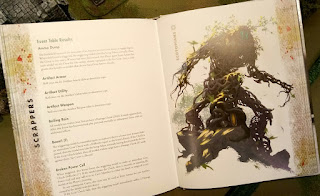 The standard 4' x 4' table is to be employed and 6-15 objectives (Scrap) are spread around the table. The principle objective of each game in brief is to collect scrap with various scenario's to brighten up the usual treasure hunt. Scrap collected can turn out to be artifacts, useful items or just scrap. Also, each time a scrap token is picked up a D100 is thrown for a random event to occur.

The post game sequence, common to these games is often the most fun part of each round seeing what and where and whom advances, dies etc.


Overall, a very nice production from Osprey Games, though slightly a cross over/common ground offering with some of their other recent releases (Rogue Star etc). I do like the layout and feel of the book and the generic feel of the background/factions only adds to the usefulness of the rules. The many photo's of posed crews scattered through out the rules does point to this as they have obviously picked up on the 'not connected to any particular range of figures' factor, as all the fairly generic pictures are at great pains to point out their many sources of manufacture.

I will dig up some scrap with these rules and give them a proper trial to see how they 'feel' and I hope they have some legs as they are very nicely produced and put together, so it would be a shame if they are consigned to the 'also ran' stable.
Posted by Hendrid at 14:25