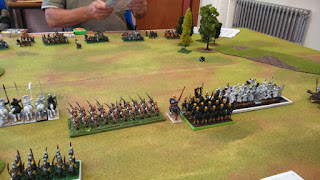 Myself and Ken at club on Monday had a trial shot of the Age of Sigmar free download rules from GW to see what they were like and to see what the hoo-ha was all about.


Digging out and dusting off his Dwarves, Ken had about 100 figures so brought them along in the form of a couple of clan units some Longbeards, Slayers, Miners and Crossbow, a bolt thrower and catapult.

Following suit, I dug out a 100 or so Empire figures in the form of a couple of Halberd units. Flagellants, a small unit of Archers and a unit of Knights and Pistoliers and added in a cannon for good measure to see how that fayred.

Since the Dwarves were 'magic-less' and to keep it simple to start with, I plumped for no magic as well.

The rules, over a whole four pages are pretty basic, but slighty deceptively as the Warscroll's (another name for army list) for each army actually have the add-ons which do complicate the rules a bit (but not much).

The game itself was fair enough once we got the gist of where things were on the rules and in the Warscrolls but had to guess a bit on a couple of points which didn't seemed to be spelt out anywhere (like the Rend modifier being a save modifier). It was actually quite difficult to not add stuff to the rules as we went along as they are simple-stupid almost.

The dicing for initiative each turn is interesting which led to Ken advancing very quickly until I got the advantage and got the charge in almost right across the board.

The mechanics of the game are basic and much the same as WHFB's under different titles, throw to hit, throw to wound and armour save. The difference is the 'not really unit's' mentallity and once we got this 40K/Warmahordes individual figure movement idea on board saw the difference particularly as my Flagellants first piled in to the flank (no difference) of his already engageed unit of clan warriors and utterly destroyed these in tandem with a unit of Halberds and my General, and then went on to take apart his Slayers in short order. The 30 strong Flagellant unit seemed very strong indeed.

Elsewhere there was a line of combat involving the Dwarf Miners, his general and the other clan unit vs my large Halberd unit and knights and towards the end my archers and the Dwarf Crossbows also joining the fray. My Pistoliers circled round the battle and in the end managed to annoy his artillery a bit.

The Dwarves really got hammered in the end but lasted until maybe round four or so when we called it a day with what seemed a slightly one sided battle to the Empire.

Several of the bits didn't seem very clear like how you sorted out multiple wounds from the likes of the cannon or catapult (with us deciding as per old WHFB rules with the multiple wounds affecting the units as a whole) but with four pages of rules this probably isn't much of a surprise. In fact the first and probably most of the second page are setting up the battle so really the rules are on one piece of A4.

Our prognosis of the rules in the end was that they were fair enough and also fun but perhaps a bit too simplistic and the field anything you want and just pile is very obviously aimed at a kids market. Indeed the whole concept does smack of the games we had as kids with Airfix soldiers and lining up what you had and knocking stuff over.

Not quite sure at what size of game is envisaged by the designers, as the individual movement of even a hundred figures could be quite repetitive and laborious, so maybe 30 to 40 figs skirmish size is the target, not sure here. Moving the units about old style, got in the way a bit of the mechanics of the new rules I felt.

There's doesn't seem to be anything to draw veterans into the milieu. That isn't what their about anyway, not aimed at our demographic. Since the whole WHFB thang wasn't broken in it's own terms, if we want out bring the troops out again, I think we'll stick with 3rd or 6th or maybe (blech) 8th or play something entirely different, or if you want a 40K/Warmahordes like experience, we'll play 40K/Warmahordes.

It will be interesting to see what new figure ranges the future will bring and I watch that window to see what goodies might appear for use in other things and though not a fan of the Sigmarines, I know GW are bound to bring out something good. Here's hoping for that bright spark.
Posted by Hendrid at 00:52