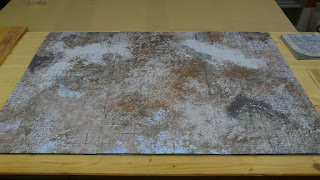 I've recently been working on an idea for some more terrain boards, this time with a more specific use. That is to say with the likes of Frostgrave in mind.

The idea was sparked by seeing Heroic Maps; Frost Ruins on Drivethrurpg which is an inexpensive pdf download which looked to be a fairly nice looking ground base for games based in the Frostgrave milieu. This download produces, when linked together a 50" x 50" playing surface.

My initial though was to produce a set of terrain tiles that would link together and be easily storable. The future addition of some 'blocks' of terrain covered in the terrain sheets would allow some elevated areas and interesting matching changes in height, is also on the cards. (Pun unintended) So armed with file downloaded and printed out on 130g card stock and a few sheets of black foam core board I proceeded to produce a first batch of 6 10" x 10" tiles.

The print outs from the file are pretty nice and interestingly 'textured' though each sheet printed out includes a fairly hefty overlap with it's neighbours (which isn't always consistently sized) so required each sheet to be cut and trimmed to suit to match its surround tiles. So a fair bit of time is spent cutting all to size and to suit the tile sizes.

Once cut, the tiles were glued to the foam core using PVA and left to dry, suitably weighed down to keep flat over night. Once dry the glued tiles were trimmed from the foam core sheet using a very sharp knife, with the cut very slightly beveled so each tile would sit evenly against its neighbour. Cut and trimmed to length cocktail sticks were then inserted into each tile (alternating) to 'fix' each tile together and stop any moving about when used. 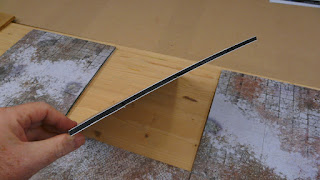 Not so unfortunately, as I discovered next day that the six tiles constructed had developed a significant bow upwards. As with a lot of these types of assembly the top and bottom react differently so to allow for this I cut and glued blank card, again with PVA,  to the underside to attempt to straighten things out. Again suitably, and perhaps excessively, weighted down while drying and made sure the temperature was consistent and not too hot.

Again this appeared to do the job but again shortly after the assembly and while laying out and connecting up the pieces, they developed a slight bend, this time in the opposite direction. Regardless of anything done, this contoured effect stubbornly remains.

Now while this partial undulation is nothing excessive, and indeed with proposed terrain and miniatures these gradual bumps may disappear, but it just destroys my karma really as the sight of the occasional shadow line in the terrain will annoy me. 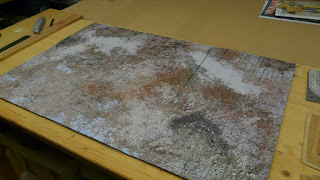 I suspect that the use of PVA is probably the route cause of the bowing of the tiles So I think a lesson learnt as they say.


But back to the drawing board and a new plan emerges. Rather than individual tiles, I'll just make two 4' x 2' terrain boards using MDF of a suitable (and un-warpable) thickness and glue the printed card stock to these.I'm unlikely to use less than the full 4' x 4' area at any time and the tiles would be particularly interchangeable any way, so a couple of standard terrain boards will do just fine. The elevated covered blocks will be made from expanded foam and will be pretty stable anyway.

I'll post the results of the reply of these trials once completed.
Posted by Hendrid at 13:30