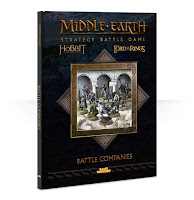 As reported in my last post, I was looking to pick up a copy of one of GWs' latest offerings, namely Middle Earth Strategy Battle Game Battle Companies. This I have done and spent a wee bit of time going over the rules contained there in.


The hard bound 80 page book is of GWs usual standard and the layout and graphic content much the same as all their previous LotR Strategy/ The Hobbit Strategy Battle game offerings.

The book contents are in main a revamp of the old rules which were originally published and added to within the pages of White Dwarf with little in the way of changes in the main rule body. What they have done is consolidate the bits and bobs in one tome. What they have added is the scenario list and an idea for a narrative campaign along with ideas for the varied settings scattered around Middle Earth to pit your own scenarios/battles in to give them a bit of originality and flavour.

The book is laid with the first quarter of the book covering the rules pertaining to and specific for Battle Companies, the next quarter or so covers the various good and evil companies that you can play from the get-go. The next thirty or so pages relate to scenarios and campaign settings with the last ten or so pages covering various design team sample battle companies as a bit of the usual end of book eye candy.

The main thing to note is that you can't play Battle Companies without resource to one of the previous versions of LotR Strategy Game or the Hobbit etc etc for reference to the standard rules for movement, combat etc etc plus the actual stats for each troop type/model. I would assume most people picking this up will have access to something which will let you get into this in the first place. I would take from the title of the book that the intention is to bring all things together under the banner of 'Middle Earth Strategy Game' but I believe there is no release date yet.

The list of available Battle Companies is fairly extensive ie 22 list which are all fairly mono-racial which I find a bit tame but as was pointed out to me, this is likely to be because a Company can be made up from a one box purchase to get things going, makes sense. There is a report in the rules that further lists will be published from time to time within White Dwarf. This may be worth a periodic check on the old WD.

I've had a wee play with the rules and all seem fine but as with all rules of this type, an ongoing campaign is where the interest lies.

With that in mind I've had a couple of ideas to run with this, the one which peeks my interest is a 4-6 player campaign set in the Third Age around Arnor (Arthedain, Cardolan and Rhudaur) and the fight with Angmar. Plenty of scope for raids skirmishes and varied terrain. Just might have legs.

Another one for the rules collection but I think this will see some action for a season or two at least.