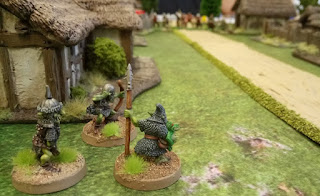 This weeks club game was a trial of the new fantasy skirmish rules from Westfalia 'Strongsword'. Written by Dan Mersey and released as part of a kickstarter with the usual plethora of mini's (all of which are very nice). Kev at the club jumping in to the kickstarter for the figs and picking up the rules to give them a try. 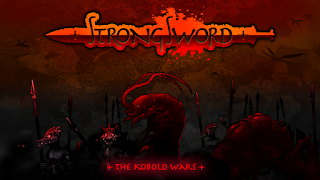 All the figs etc are Kev's (though not from the kickstarter) and Kev umpired the game with myself and Dave K being the willing victims for the rules trial.

The scenario (from the rules) chosen to trial the rules was a raid on a Troll village with a band of human ruffians (Dave) and a band of Goblin Veterans (myself) doing the raiding.


Trolls in the middle of the village and another three at random doorways when approached and Humans and Goblins approaching from either side of the village. I won't go through a blow by blow account of the game but the victory went to the Humans on a scalp point count (so much for each of the Trolls and a varying amount for each warrior, veteran, hero or champion) with them picking up four of the trolls to bow fire early on.


The fight was pretty even once contact was gained (similar stats for a goblin veteran to a human for instance) and the limited magic used was fairly minor mostly an add on to the combat rather than a game changer but that was on a one game only view. There's probably more to that with more games under the belt.


In fact all the game mechanics were pretty simple with everything being done on a D10 which I like and pretty similar to most of Dans' game mechanics in other rule sets like Dragon Rampant et al. Nothing there to tax the brain and easy enough to pick up a game with any issues. The rules are pretty inexpensive so not much to dish out and give them a try and certainly pretty on the eye with a clear typeface and decent layout.

Like most skirmish games, the enjoyment from these rules will depend on a good round of scenario's and there are some in the rules to get you going and more available online apparently.


I quite enjoyed the game over all and for a small(ish) set of fast play rules thought they were fine and would be happy to air the rules again.. This may be the issue here in that there wasn't anything innovative or particularly unique about the rules and if you've other skirmish rule sets already, nothing in particular to drag you over to Strongsword. If you don't already, then these will serve you well without issue.

The rules do revolve around Westfalia's range of figures and obviously now a days you need to have a set of rules to support these (apparently) so thats fine and to be expected. The figures are very nicely done as always ( I particularly like the kobolds) are a suitably fantasy generic but with a few specific ones which are a bit different (like the arab style hobbits for instance) which fit warbands for the rules but will be used elsewhere without any issues to slow you down.

You can download a preview version of the Strongsword rules here.