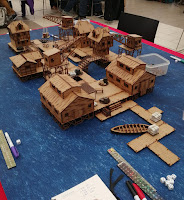 Had my first show outing this year to Edinburgh for the Claymore 2022 show held in the usual venue at Granton Campus Edinburgh College yesterday.
First proper outing hobby-wise since Covid and wanting to get out and about again which I duly did.
No intentions of buying anything as I've more than enough to be getting on with, with my buying not in the least curtailed by worldwide pandemics etc over the last year or two. But you never know if something might catch your eye.
Hadn't been to Claymore since 2018 as felt it was a bit flat on last attendance (but that might of just been me on the day) but this feeling didn't leave me this time and I think this is really down to the venue not being conducive to a up atmosphere and the main hall particularly (with a glass roof) being very warm, though not excessively busy. I did think generally the halls were a bit quiet but this may be a perception thing based on being there solely after 12 o'clock.
The venue is quite spread so you don't get any buzz from the two halls speading and the Bring & Buy is a bit of a distance away at the end of a hall, so it does feel a bit disjointed.
Expecting the entrance fee to have gone up since last visit, but thought the door entrance of £5 a bit steep especially as there wasn't a handout or trading list available with it. Understand the Council have likely increased costs for hiring the venue since 2018.
Also no catering available but that was probably expected to be honest.

Several nice games on and I've posted pics of the ones that particularly caught my eye, though in no particular order. 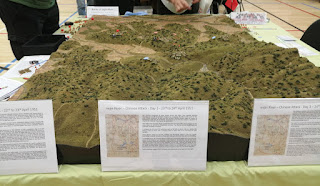 Traders were a wee bit down in number I thought, but not excessively and all the regulars were there in their chosen spots.

Didn't pick up anything really as a bit late in the day for any choice stock probably, though I did linger on some terrain bits and bods and also on some painting and modelling accessories but ended up empty handed though enjoyed the browsing and managed to have a look at a couple of rule sets I had wanted to have a look at before buying, so that was very useful and enjoyed the leisurely browse.

I was glad to get out and about and spoke to a fair few bods I hadn't met up with for ages and for this alone was worth the jaunt through to Edinburgh and did overall enjoy the outing.

Quite taken with Warbases Lochbhaile range of MDF laketown-esque kits.and thinking of a few uses for these with a bit of tarting up etc. Nearly bought a couple of kits but decided a bit of planning (and clearing the decks) was in order before embarking on another project. Nice though.

Email ThisBlogThis!Share to TwitterShare to FacebookShare to Pinterest
Labels: Shows